Ola’s license was suspended in Karnataka on Friday

Ola cabs continue to be operational in Bengaluru

Less than 24 hours after cab hailing unicorn Ola was banned from operating its cabs and bike services in Karnataka, the company continues to operate its cab services as it looks to find a solution to its ban.

Multiple users from Bengaluru told Inc42 that the company’s cabs are still operational in Bengaluru. The commuters Inc42 talked to said that they are able to book cabs and Ola autos, while some reported small delays in booking cabs. Several of them were not aware of any such hindrance in operations of Ola. 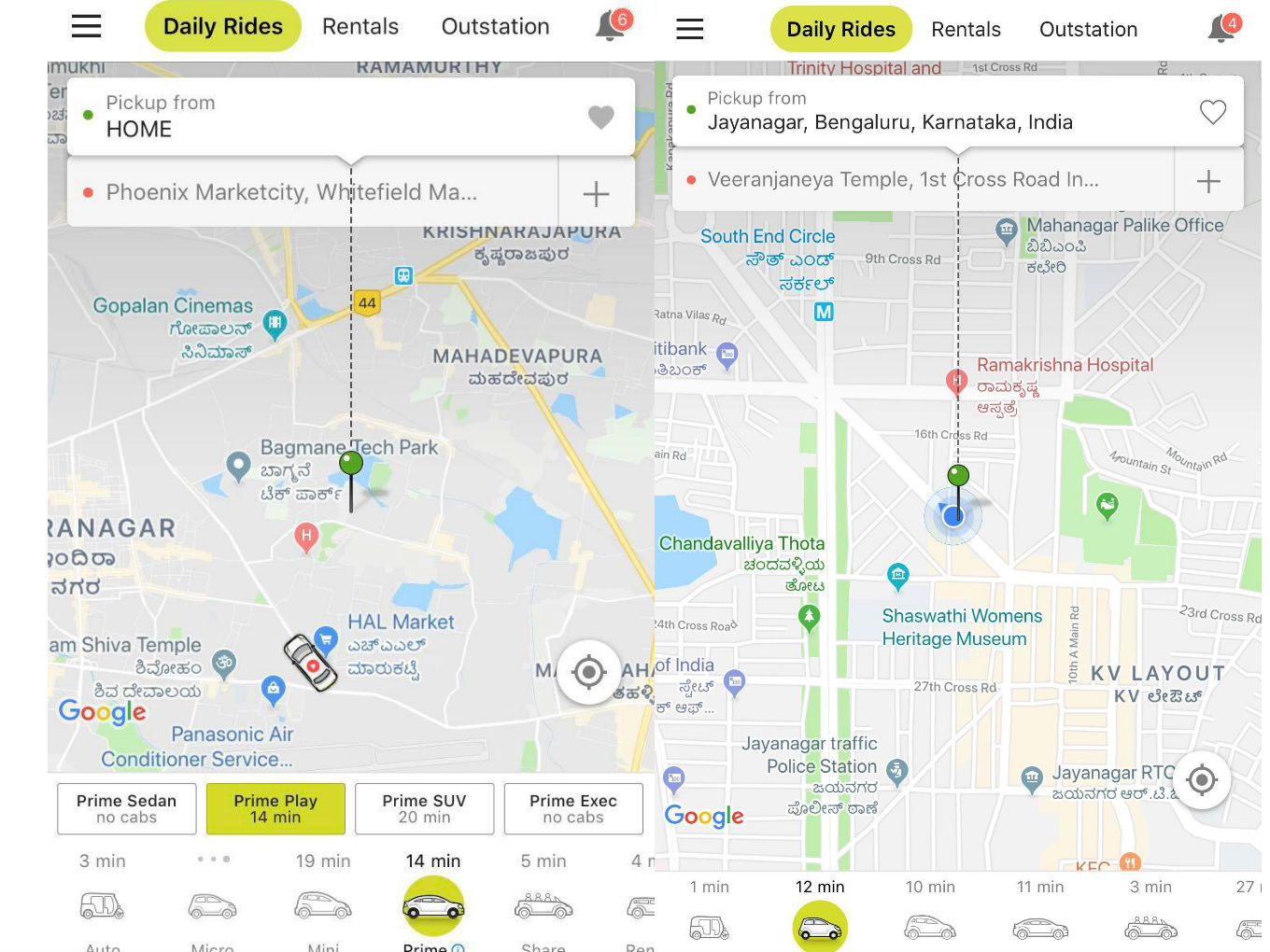 On Friday evening (March 22), the Regional Transport Department of Bengaluru suspended Ola’s licence and prohibited it from running cab operations in the state of Karnataka for a period of six months. The cab aggregator got into this trouble for allegedly violating the license conditions for running bike taxis and also violating government rules.

The notice has been issued due to violation of Section 11 (1) the Karnataka On Demand Transportation Technology Aggregators Rules 2016, owing which the Transport Department can decide to cancel the license of the cab aggregator as there is a violation of rules.

The notice added, “Prior to this, a notice must be sent to the company in question. Hence. on February 15, 2019, the Transport Department had sent Ola a notice, asking the company to respond to the findings of the probe. Ola sent its reply on March 3, 2019. As the company’s reply was not satisfactory and did not provide any evidence which proved it did not violate norms, the Transport Department, as on March 18, 2019, has decided to suspend the license of Ola for a period of six months.”

Here’s what public had to say on the ban: 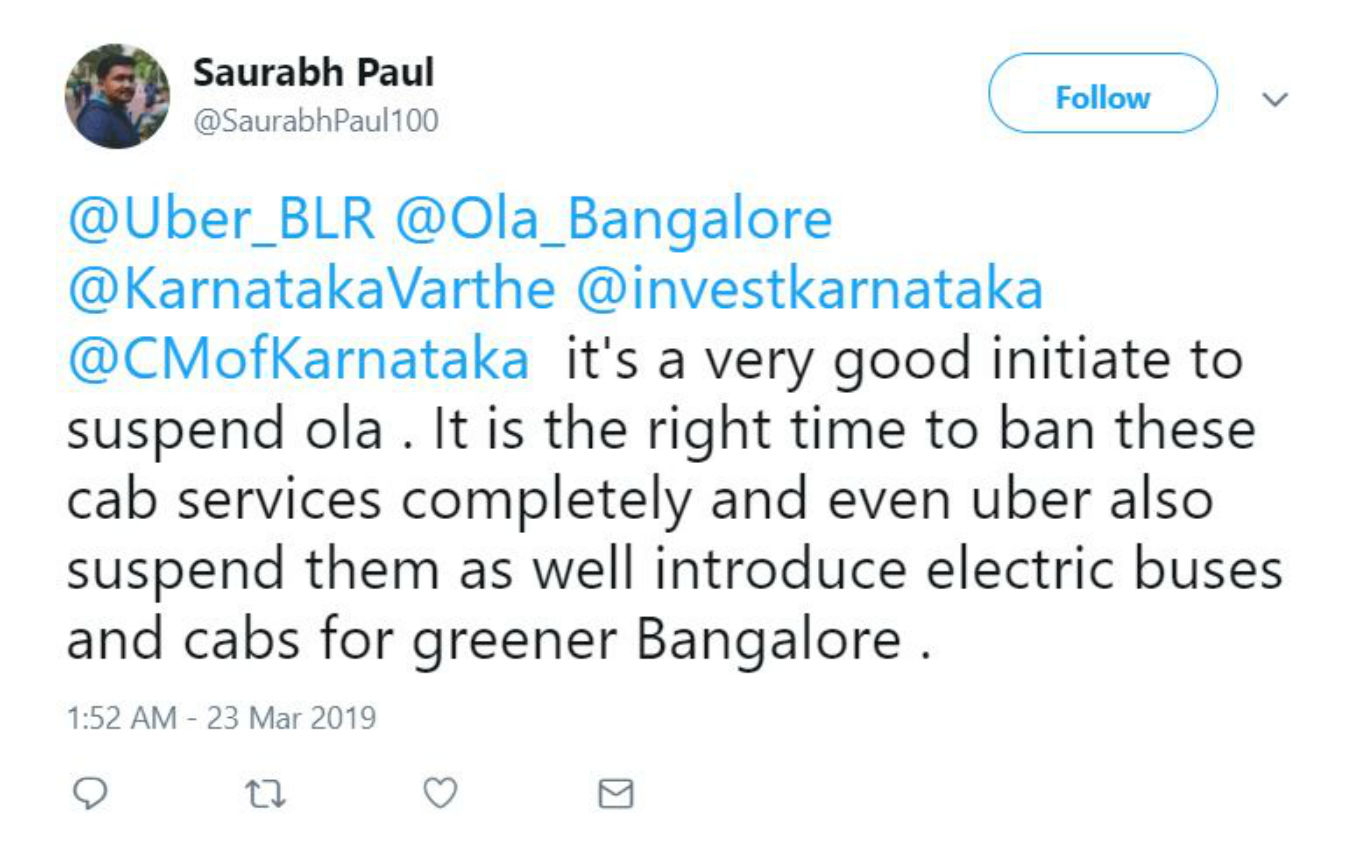 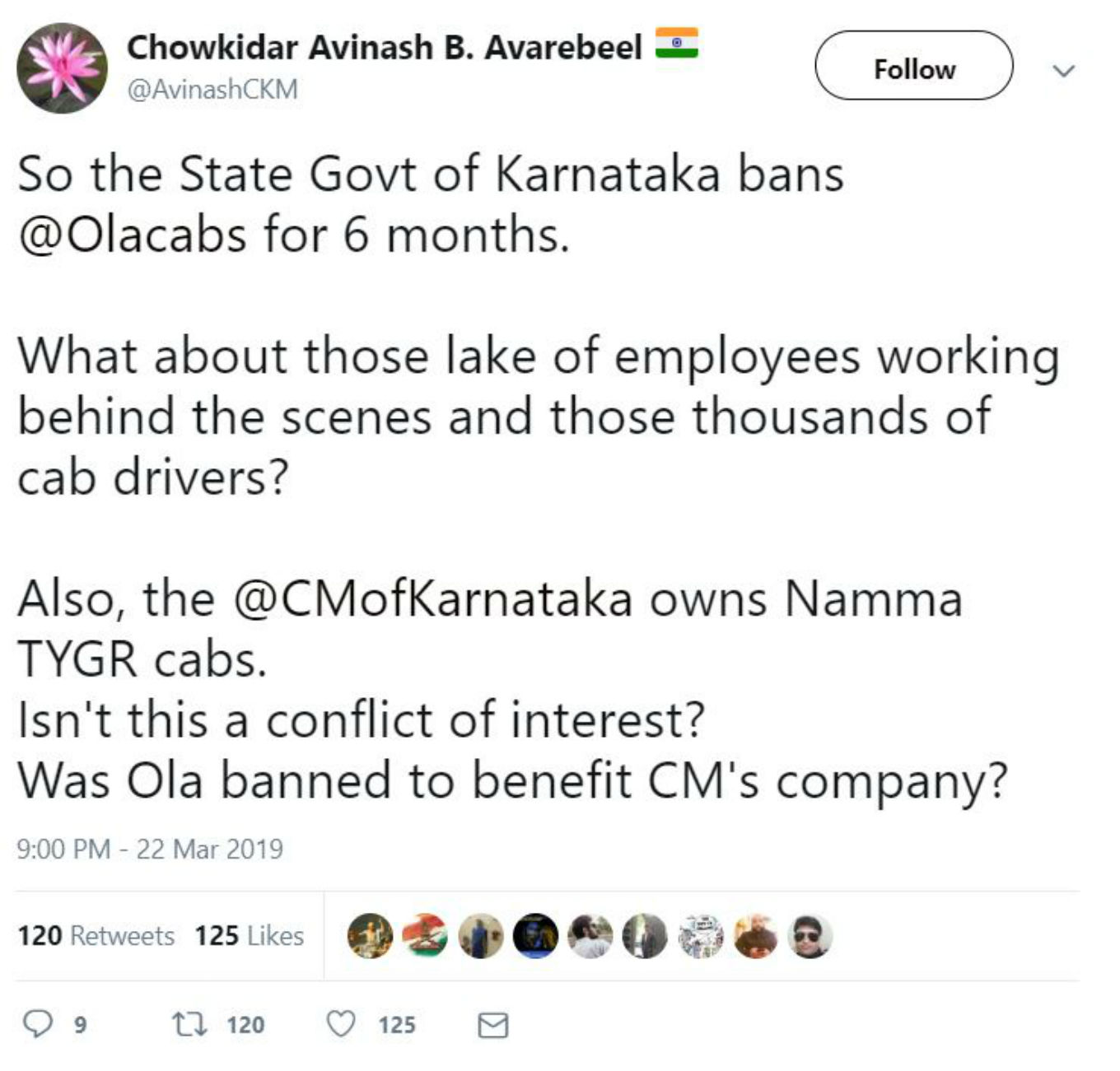 Ola responded saying that the notification was unfortunate and is now evaluating all options to find an amicable solution.

“We have been closely working with the authorities on this topic, responding to queries and making proactive representations to the ministry. Despite other companies continuing to operate illegally, we halted our bike taxi experiment weeks ago. Instead, we sought the state’s cooperation to develop a legal framework for a pilot that will continue to take advantage of emerging opportunities in the mobility economy,” said the cab aggregator in a statement.

Following this, Karnataka’s Social Welfare Minister Priyank Kharge tweeted that he has spoken to the CM and Deputy CM and will have it resolved by tomorrow (Saturday).

He said, “Our government will maintain a healthy balance between investors, industries, consumers, and welfare within the ambit of law.”

It is to be noted that Ola has nearly 1 Mn drivers in the country, with maximum of those employed in the top three metros. Inc42 sources confirmed that Ola employs nearly 50,000-60,000 drivers in Bengaluru itself.

Ola has been aggressively pushing its two wheeler strategy. As part of this, in December, it invested $100 Mn (INR 712 Cr) in Bengaluru-based Vogo to fund the purchase of 100K scooters to boost Vogo’s current fleet.

This is not the first time any new services by cab aggregators has faced a ban. Earlier in 2017, Delhi government, under its new City Taxi Policy 2017, was examining a ban on ride-sharing services like Ola Share and UberPOOL in Delhi. The amendment will come under the purview of Motor Vehicles Act, 1988.

Prior to this, in March 2016, Uber and Ola’s bike sharing services, uberMoto and Ola Bike were also declared ‘illegal’ by the Karnataka State Transport Department and were consequently banned from the state.

The recent notification has also reportedly affected Rapido’s bike taxi services, however, the company refused to comment on the development.