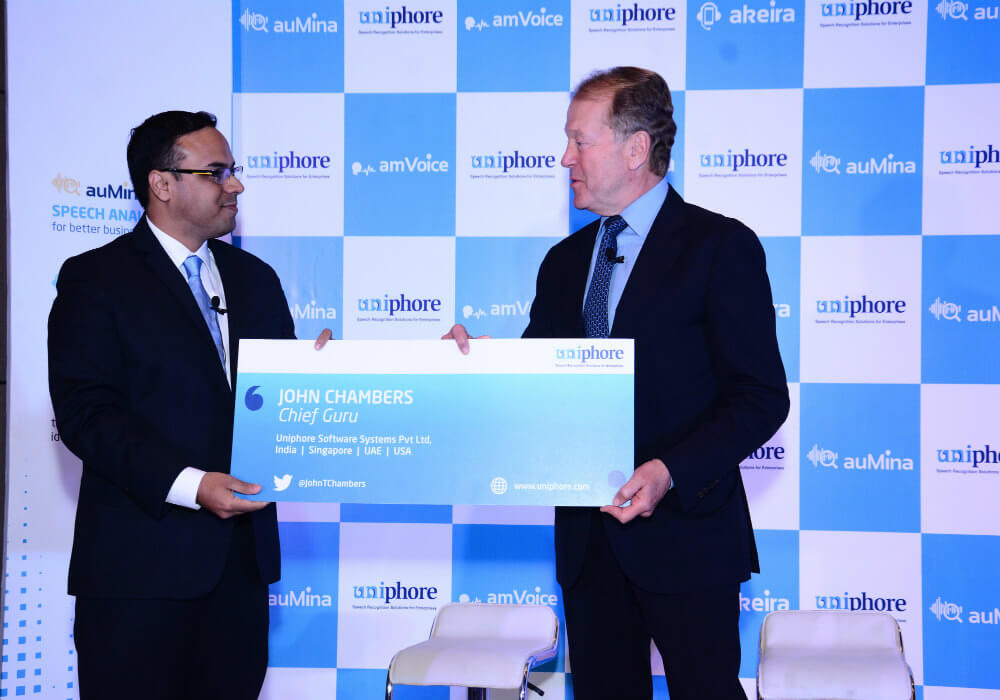 Developing voice assistant and speech recognition solutions, Chennai-based IT startup Uniphore Software Systems has closed its series B round of funding led by the Executive Chairman of Cisco and the newly made US-India Strategic Partnership Forum (USISPF), John Chambers, in his personal capacity. The round saw participation from other existing investors including IDG Ventures who led the previous round. This is the first startup-investment of Chambers outside the US. Earlier this year, John Chambers was also part of the top 20 American CEOs delegation invited by PM Modi, to invest in India.

Commenting on the fundraise, Umesh Sachdev, cofounder and CEO of Uniphore Software Systems said, “We are humbled by John’s concurrence to be Chief Guru at Uniphore. It is our good fortune to have an industry veteran like John invest in the future of Uniphore. While John’s monetary investment is certainly important to the company, it is his vast and varied experience building a globally leading IT company that adds incalculable value to Uniphore and I am certain that the company will gain immensely from his counsel and guidance.”

Founded by Ravi Saraogi and Umesh Sachdev in 2008, Uniphore is an IIT Chennai-incubated IT-startup developing solutions in speech analytics and virtual assistant verticals such as auMina and akeira. The startup has now its offices in Chennai, Bengaluru, Singapore and UAE. The existing investors of Uniphore include John Chambers, Kris Gopalakrishnan, IDG Ventures India, India Angel Network, YourNest Angel Fund and Ray Stata.

Speaking of the investment, John Chambers said, “I am a big believer in India and its potential for producing globally relevant startups like Uniphore. The company was able to foresee the growing need for deep technology in the area of speech recognition and has innovated ahead of the market to capture this significant opportunity. During my time working with and mentoring Umesh, I have been impressed with his leadership and passion for improving customer experiences, and his ability to build a world-class team of software experts.”

While the speech analytics and virtual assistant verticals are estimated to touch $10 Bn by 2021 globally, with funds from John Chambers, Uniphore aims to establish an early lead in the segment. While Amazon and Google lead the race in the segment, recently, many Indian startups such as CogiCor and active.ai have also jumped in the virtual assistance race, integrating ML, IoT and AI.