Earlier, Flipkart Was Operating Through 11 Offices In Bengaluru 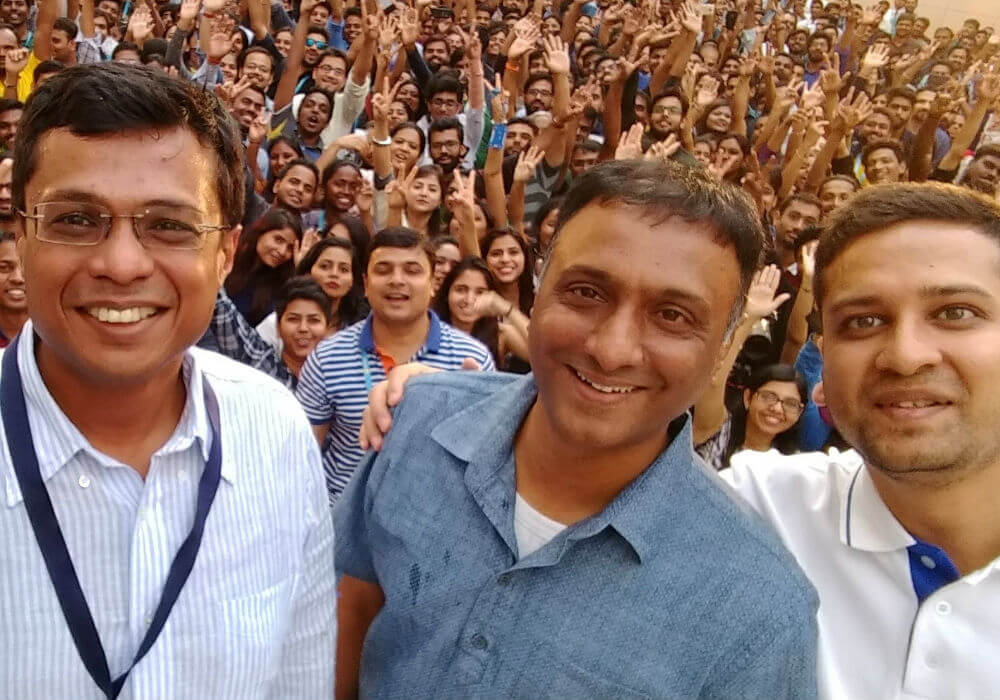 Google. Facebook. Apple. Twitter. Spotify. These tech giants might be excelling in different segments on the consumer front, however, one thing that’s still common between them is, their massive office buildings.

Post weekend comes Monday with its dreadful Monday blues and this marks the beginning of a monotonous office routine. To enliven time in the office, companies from across the world are bringing changes in the office to nurture a positive and progressive environment. From office structural changes to engaging games and activities amongst employees, workplaces are going all-out to nurture the work environment and Silicon Valley has so far been the best in this.

However, it seems now that Silicon Valley’s Indian counterpart, the Bengaluru city is not far behind to ramp itself up. Flipkart’s Bengaluru office is enthralling the global startup community with its new and, so far, the largest office space launched recently. 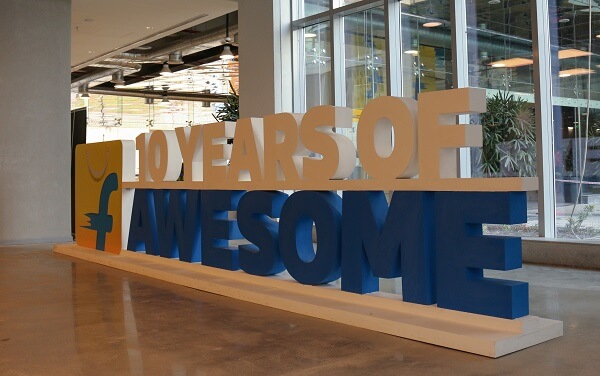 Here’s is the interesting part of all this.

The Indian ecommerce poster boy and a unicorn valued at $11.6 Bn, Flipkart has now consolidated all its Bengaluru offices and is now operational out of one campus in the Embassy Tech Village (ETV). On March 31, the leadership team from Flipkart including, Kalyan Krishnamurthy, Binny Bansal and Sachin Bansal were present with their employees for the launch of the new campus.

Just to give a head start, the new campus is spread across 8.3 Lakh Sq. Ft area, with three separate buildings (A, B & C having interconnected bridges) comprising 30 floors and a seating capacity of 7,300+ altogether. It offers a range of basic amenities and shared facilities such as food-court, gym, daycare, etc.

The leased space has been designed on the concept of “European Town”. As a Flipkart spokesperson explained during an email interaction with Inc42, “We wanted to bring in the sense of variety in the buildings as it typically happens in any town and the campus, not to look like a traditional office space.”

He further added, ”As the town grows the buildings of different sizes with different façade come up. Hence the concept of the mini-city suited this vision. The idea was to have internal pathways which are pedestrian friendly and give the employees sufficient space to walk around, walk while you talk some serious business solutions with their peers. That defines the European small town concept.”

The Non-SEZ portion of the ETV now manifests itself into three unique looking buildings with variable volumes and a variety of façade treatment. The central street form the “High Street” impression with food courts on the both sides and plazzas at the either ends. 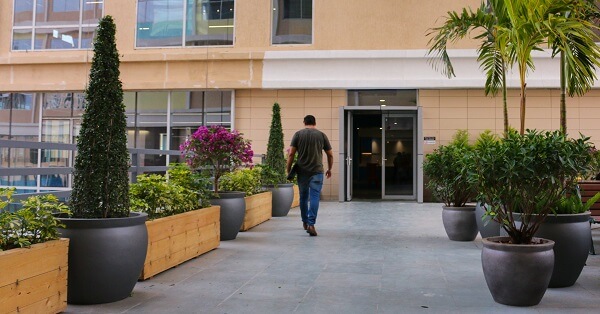 From a planning perspective, the requirements of the new office were drawn up based on the workplace usage study in Flipkart’s previous offices. Additionally, the leadership team’s vision of the new office called for the spaces to be efficient, functional and comfortable, as well as contemporary, open, bright and lively. 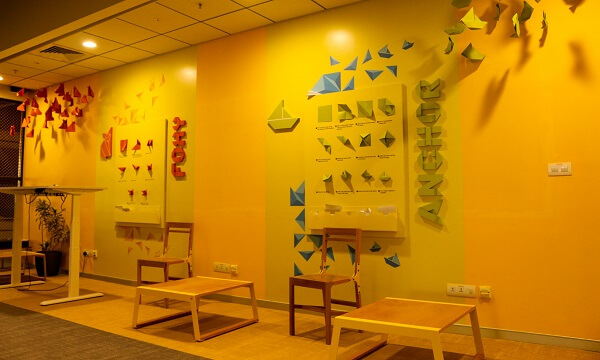 There are improved meeting room ratios, there is usage of connecting bridges between the buildings to locate the internal staircases to induce people to walk across floors and benefit from chance encounters and collaborations, and employees’ amenities like recreation and entertainment spaces, relax rooms, mothers room, laundromat, café shop, outdoor recreational or activity space. 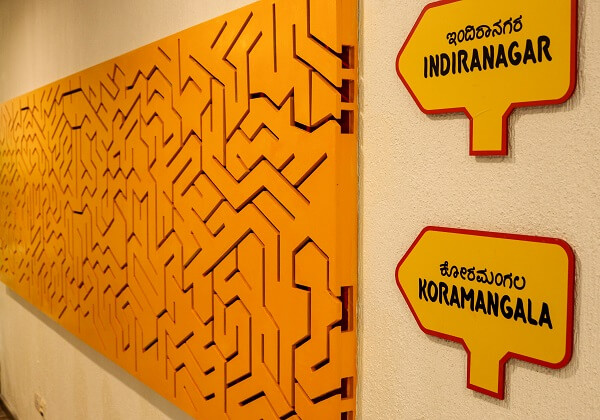 All the space in general, are therefore functional in their planning and treatment, with ‘frugality’ being a key attribute of the design. The idea was to create lots of simple and smart space around the campus, void of unnecessary ornamentation. The buildings have a composite structure, with steel sections and members exposed and the interiors designed in line with the structure of the building rather than attempt to conceal them. 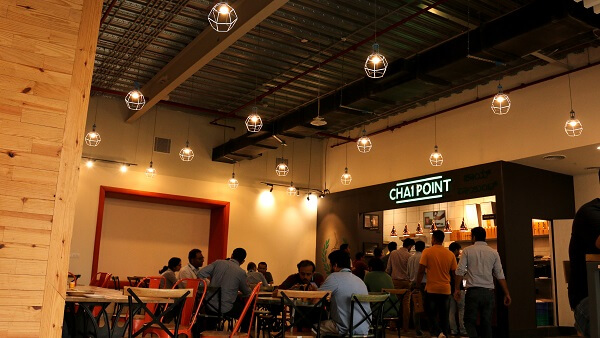 The new office also brought in the much-needed connect with the warehousing and logistics part of the business. With this approach, the underlying idea therefore, became to use a handful of rugged materials sensibly – mainly, steel, concrete, glass and timber. Thus, the end result is a space that is probably a true reflection of Flipkart and its business. 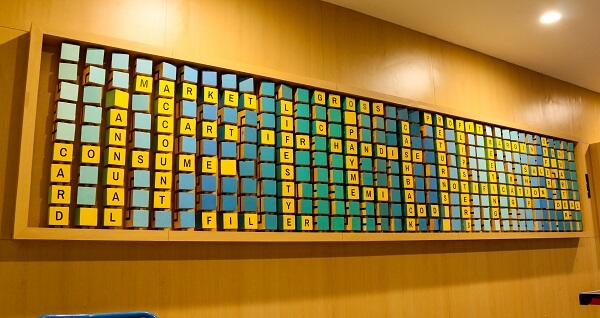 Usage of five Flipkart brand colours across the floors has further added the playfulness and reflects the young population in the facility. ‘Energy’ and ‘collaboration’ as keywords, combined with the ability to look at things from a different angle resulted in the concept of ‘Meet Me on The Flip Side’, which is now the theme behind the wall graphics and meeting room names for the three buildings. 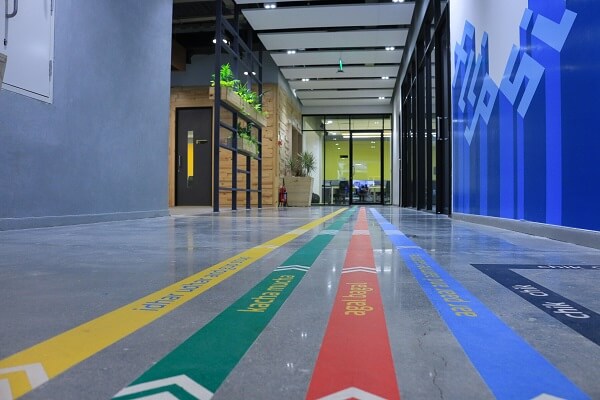 There are also Quiet Zones inside the building with enclosed spaces in each building to allow for quiet and focussed working. Apart from this, indoor and outdoor recreation space, desk plants, laundromat counter are the few other things which automatically lures the team to the office, even on the dreading Monday Mornings. 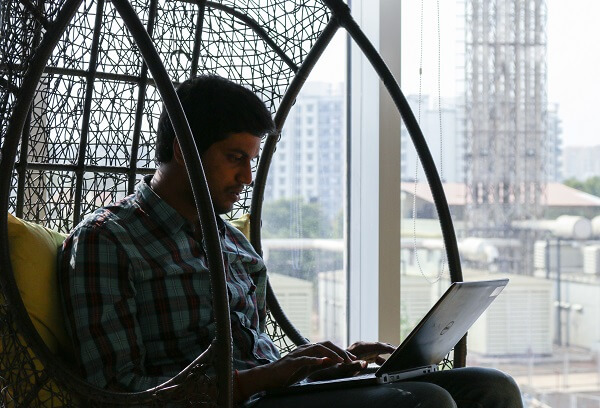 10 Years Of Operation, Why The Consolidation Now

As per the company’s spokesperson, the first move towards the consolidation was made in 2015 itself. “This decision, to be ‘Better together’ was taken in 2015, and was largely aimed at improving operational efficiency and to also benefit from the resulting synergy between its various teams and functions, who would work out of a single location for the first time in years.”

The mid-2015 was one of the golden periods of Flipkart. In particular, July 2015 was the time when a lot was talked about the company’s profitability, achieving positive unit economics and great leadership. With promises to generate $10 Bn GMV, investors gave it a 1.5X multiple (on the previous valuation), thereby valuing the company at $15 Bn.

However, late 2015 to the early 2017 era narrates an entirely different story. The period was majorly filled with several struggles for the founders Sachin and Binny Bansal, until March 2017 when the company onboarded investors like Tencent, eBay and Microsoft with $1.4 Bn funding and later, with another $2 Bn from Softbank.

Be it the launch of new private labels or its foray into new verticals like hyperlocal delivery, online grocery, manufacturing of electronics products as well as smartphones, or even the utilisation of new age technologies like AI, ML and Big Data, the company is currently running at the forefront in every segment.

Most recently, the company has also reportedly got a rival offer from Amazon for consolidation and is in talks with Walmart for a significant investment, against 51% stake in Flipkart, raising the valuation to $20 Bn.

What Challenges Will The New Consolidated Working Space Solve For Flipkart?

At one point of time, Flipkart operated from 11 offices spread across Koramangala, ORR and Hosur Road in Bengaluru. The total area occupied was approximately six lakhs square feet with the biggest facility accommodating around 2,000 people and the smallest of about 400 seats.

Consolidating all its Bengaluru offices and moving into a central location has its own benefits to the companies as well as employees. By co-locating all its business units into one new, agile work environment, the company aims to create a unified office that supports cooperation, collaboration and flexibility.

“In the last 10 years, the growth of the teams happened as per business requirement of these diverse teams. We believe centralisation will promote increased productivity and engagement through efficient ways of working,” the Flipkart spokesperson added.

Also, because there were multiple offices, teams had to travel between these offices leading to variable commute times. With the new campus now accommodating all the teams at one place, Flipkart management expects that there is going to be enhanced synergy in working together as a team and leadership being accessible at all times within the same facility. The commute time for teams can now be leveraged more meaningfully.

Have there been any challenges from the employees’ side on shifting to the office location? To this, the spokesperson stated, “As the campus was being planned and worked on for almost last three years, the final movement to the campus was an expected thing with employees. During this time, regular updates were shared with employees on the progress of the campus project. The benefits to the employees working from one location are so immense that there was hardly any convincing needed to move to the campus.”

Since its launch in 2017, Flipkart has raised its own mafia of investors, entrepreneurs and startups. As per Inc42 DataLabs, there are over 207 startups founded by ex-flipsters in India so far and there are 50+ startups being backed by Flipkart, Flipkart founders, and current or ex-employees.

The new consolidated office space has added another feather to Flipkart’s cap. Sachin Bansal and Binny Bansal has not only build a unicorn but also imbibed the trust of the ecosystem stakeholders in startups and made entrepreneurship a buzz-word. As Paytm CEO Vijay Shekhar Sharma pointed out in one of Inc42’s earlier AMA’s, “Sachin Bansal is the reason this country has this bright vibrant startup ecosystem”, Flipkart’s recent consolidation will certainly boost the team’s morale to add some more milestones in its journey ahead.