Chennai-based Inkmonk, an online printing marketplace for customised products has raised around $750K in a Seed funding round. The investment was led by VAMM Ventures, which invests in seed and early-stage startups, and is headquartered in Dubai, United Arab Emirates.

Two Japan-based companies, Raksul, a printing marketplace and Dena, an internet firm, also participated in the funding round.

With the marketplace model launched in 2015, Inkmonk has till date raised about $1 Mn in funding including the current round. In August 2015, the startup had raised $250K angel funding from notable investors like Girish Mathrubootham, founder, and CEO of Freshdesk; Phanindra Sama, ex-CEO of Redbus, among others.

Inkmonk: Funding And The Journey So Far

Founded by Isaac John Weasley and Surya Sankar, online printing marketplace Inkmonk is currently raking in around 180K monthly visitors on the platform, comprising 30 product categories spanning across 5,000+ product customisations. With a team of 22, the platform works by helping customers design online and discover print shops across India with instant pricing and delivery options for the customer to choose from.

With around 200 print shops onboard, Inkmonk is also building an online reputation for each shop to compete against each other on a fair basis with genuine ratings and reviews by customers. The Inkmonk founders now aim to reach 100 categories in the next four months and further increase their marketing activities, with the newly raised funding.

Isaac particularly claimed that Inkmonk’s capability is to bring out the industry prices outside the system as well as ease off the complex considered offline printing market in many parts of the country. As he claimed, there were some markets in Bengaluru where it became difficult for people to identify good vendors. With Inkmonk’s online printing marketplace, such print shops have got more visibility.

Commenting on the journey of building Inkmonk, Isaac said,

“The $29 Bn print and customisation market of India is ripe for disruption with most businesses preferring convenience and ease of purchase in online platforms. I believe around 5% of this market is already discovering print service providers over the internet with business value worth $1.4 Bn annually. This is a big motivation for us to keep pushing further in taking over the industry with sheer trust and convenience.”

From the customer perspective, Isaac indicated that there has been an increasing demand for discovery and booking of print services online due to the inconvenience of visiting local print shops and comparing the best service amongst them. However, he also got an opportunity to witness the gaps on the other side closely being part of a family where offline printing business has been running for over 25 years.

As Isaac added, “I realised that the publishing capacity is underutilised. Although, my father had a repeat customer base from over 15 years, and he published 250K copies per month, but on an average per day only 10K-15K sheets get published. This is kind of the utilisation- just 5%to 8% of the entire printing mission, which originally has the capacity to print 250K copies a day.”

Later, while he was in Bengaluru, working as a Product strategist and designer for Interviewstreet – HackerRank, he used to sit in print shops in Koramangala and talk to the people coming over there.

“I found that almost 90% of the people come there with digital files and spend 40-50 minutes in the mom-and-pop shops. They talk to vendors, compare prices, take samples, etc., – a variety of tasks which can easily be done online. Also, we already have players such as Vistaprint, PrintVenue, etc., but still I found that these local print shops dominate the market more. Thus, this was not the problem of availability of service, but a fundamentally unorganised market,” added Isaac.

Isaac left HackerRank in February 2014 and started working full-time on building his own venture. Coming from a tech background, the first concept that came to his mind was of building a printing API with a complete B2B model in mind. As he reminisced, “I realised not only printing, but it’s the logistics of printing that is the main problem for the companies. During a startup meet, I met my co-founder Surya who was luckily thinking to quit from his position of Software Developer in Amazon. So we together developed an API for printing and started approaching the companies.”

The API worked as follows. Traditionally, if a bank needs to print the information for each of the new joinee in a particular month, a person specifically has to collect all the data, take it to the nearby local printing store, and then collect the parcel (adding upon the multiple follow up visits and each to and fro movement to get the samples approved). With the Inkmonk API, the person in the bank can interact with the Inkmonk interface, fetch data from the system, get approvals then and there, and start printing and shipping the required product. Thus, saving time and effort both. 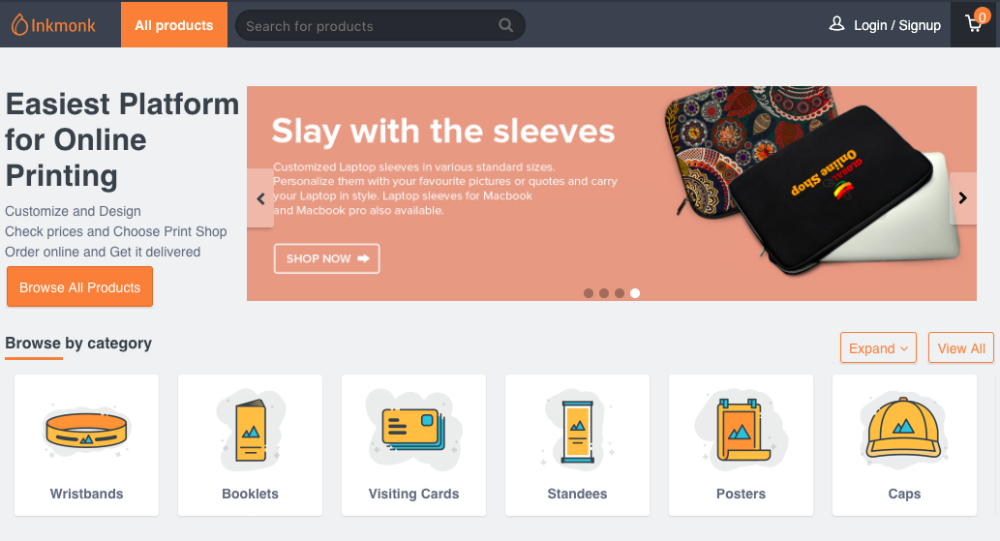 However, like many other SaaS companies in India, they also faced similar problems – the inability to convince the companies to adopt new technology. Despite months of hard work, they were not able to go beyond seven clients in India, but got a huge hit in the US. However, ultimately, they decided to pull shutters down on the concept.

As Isaac said, “We realised that India is too early a market for such kind of technology. We could have pushed ourselves for Silicon Valley, but we found a similar firm, LOB.com, backed by Y Combinator, there. So, either we could have burnt ourselves in the competition, or we could try another business model to tap the unscratched $29 Bn online printing industry of India.”

The duo again started out with their research and found that, although, availability of local print shops is there, people face problems in procurement and authentication of the vendors.

As Isaac added, “So, that’s when the idea of a marketplace started up, and after working for two months, we officially launched it in April 2015. Inkmonk is now the bridge between local printwallas and the companies/customers. In essence, we are the Zomato for printing, giving all information as well as a one-stop shop solution for ordering any kind of customised print products.”

What Is Inkmonk Counting Upon?

For Isaac and Surya, the synergy built between various local print shops and Inkmonk have played a major role in driving growth, even in the presence of players like Vistaprint, which acquired Printbell and entered the Indian market in 2011.

“Plus we don’t own any assets. So expanding product and printing categories are quite easy for us,” Isaac added.

The Inkmonk founders are majorly focussing on small companies, law firms, restaurants, etc., with a significant 60% B2B and 40% B2C user base. However, 80% of the GMV comes from the B2B while the rest 20% comes from the B2C. “Thus, the B2C portion just acts as a bait for us to attract bigger orders and get connected with corporate clients,” chuckled Isaac.

As Isaac said, “It took us a little longer time to get a product-market fit. The tech architecture that we wrote for printing, we highly underestimated its worth. For instance, on an ecommerce marketplace, one can build a system where a seller can take a photo of an SKU, add a price for it and start selling it on the platform. However, printing is entirely different, as for each product there are on average four-five levels of customisation, thereby, altering the pricing too. Thus, we need to build an engine where we can provide this level of customisation to each customer. We have rewritten the entire architecture and have worked on these gaps from the bottom, helping us scale so far.”

Since the inception in 2015, Inkmonk has come a long way. With the newly-raised funding, whether the online printing marketplace will be able to fulfill its plans and achieve the top spot is something that remains to be seen.