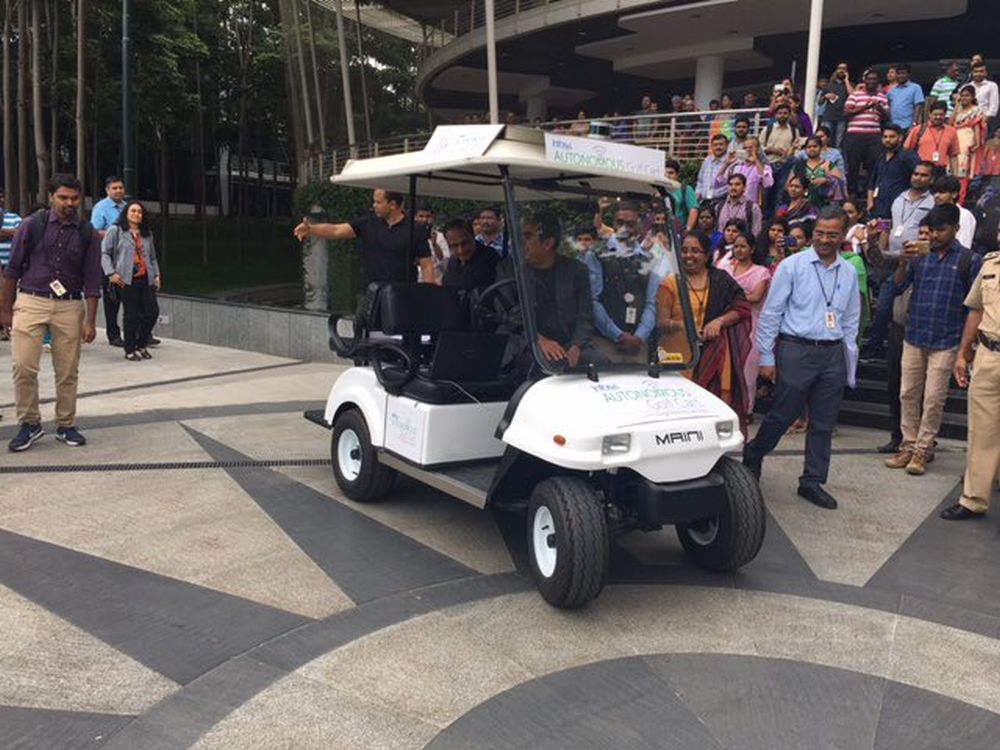 Infosys has reportedly built a self-driving vehicle. CEO & Managing Director of Infosys, Vishal Sikka showcased a futuristic driverless cart at a recent media briefing by the company in Bengaluru. According to sources, the vehicle was developed at the IT giant’s Mysore campus.

The automatous cart was built to train employees on the latest technological developments in emerging fields like artificial intelligence and machine learning.

In a recent tweet, Vishal Sikka introduced the driverless vehicle.

Equipped with an array of sensors, the driverless cart is programmed to autonomously sense its surrounding. It does so by using an AI-driven system to navigate without having to rely on a human driver. The vehicle also comes fitted with advanced control features that enable it to identify road signs, traffic signals, and obstacles.

Commenting on the cart’s innovative design, Vishal Sikka stated, “I drove here to this venue in our own indigenously— built autonomous golf cart. This is a test bed that we have built to train thousands of engineers on autonomous driving technology as we renew our existing services on the basis of these dual forces of automation and innovation.”

The driverless cart is one of Infosys’ many initiatives geared towards exploring new technologies, software and services in a variety of sectors. At the media briefing, Sikka claimed that over 10% of the tech company’s total revenue came from these new products and services in Q1 2017.

Founded in 1981 in Pune, Infosys is a multinational information technology company. It primarily offers software development and maintenance services to businesses in sectors such as finance, insurance, manufacturing and banking, among others. It has served more than 1,045 clients in 50 different countries across the world, as of January 2016.

In recent years, Infosys has been looking to expand operations in India through the development of new products and services in emerging domains. In December 2016, for instance, Infosys invested an undisclosed amount in Mumbai-based drone maker ideaForge, as part of a $100 Mn (INR 70 Cr) Series A funding round led by WRV Capital and IndusAge Partners.

The tech major has contributed greatly to the growth of the Indian startup ecosystem in the last two years. The Infosys Innovation fund was started in 2015 with a corpus of $500 Mn earmarked for startups and businesses in the field of technology. In January 2017, the company poured$62 Mn from the fund into up-and-coming startups in automation, unmanned aerial vehicles (UAVs) and IoT. The innovation fund also infused $4.6 Mn (INR 31.6 Cr) in Bengaluru based early-stage VC firm Stellaris Venture Partners in November 2016.

Electric Cars And The Move To Driverless Vehicles

As per reports, the global driverless car market is expected to cross $65.3 Bn by 2027. At present, the United States constitutes the largest market share at 39.08% and is poised to reach $24.04 Bn by 2027. The space is currently inhabited by big players like Mercedes-Benz, General Motors, BMW, Toyota, Tesla and others. In recent years, Internet-based companies like Google and Uber have also forayed into the realm of self-driving vehicles.

The Indian autonomous vehicle industry, however, is still at an embryonic stage, with the government currently working to promote electric cars as a viable, environment-friendly alternative to conventional ones. In January 2017, the Indian government announced to bear up to 60% of the research and development (R&D) cost for developing the indigenous low-cost electric technology. Later, in June Tesla CEO Elon Musk said that his company was in talks with the Indian government for import exemption.

The government is aiming to make the country a 100% electric vehicle nation by 2030. The endeavour coupled with the indigenous model of driverless car, like the one built by Infosys, proves that driverless cars might be soon arriving in India.