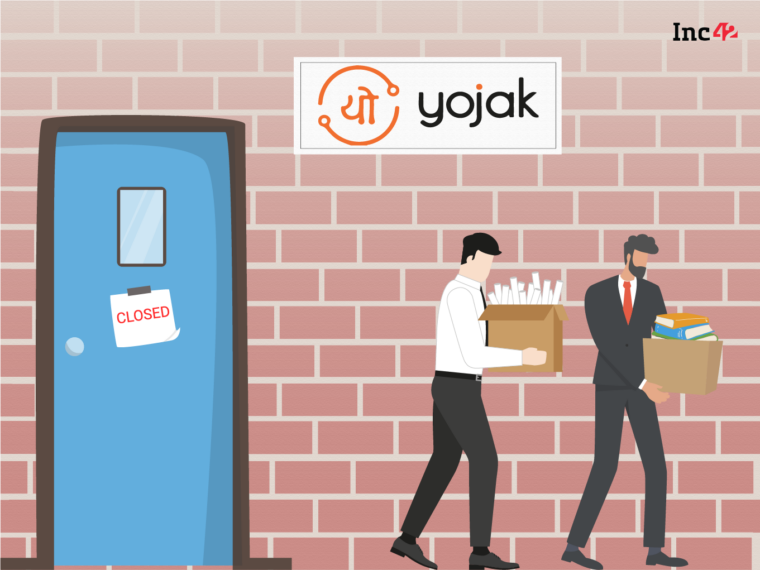 Yojak, the B2B marketplace for construction goods, has laid off employees mostly from domestic operations

The layoffs come nine months after it received $3.8 Mn Pre-Series A funding round

Gurugram-based B2B ecommerce marketplace Yojak has shut down its India operation and laid off around 140 employees in April and May. The Info Edge-backed startup let go these employees as it ran out of funds to operate its domestic business. Of the 140 laid off employees, 60 were full-time, while 80 were contractual resources, sources told Inc42.

As per the sources, Yojak had a total headcount of around 280 employees, including full-time and off-role employees, before the layoffs.

As per people aware of the development, Yojak, which connects manufacturers in the construction business to small retail stores across India, will focus on exports through Yojak Exports. The startup exports construction goods to the US, the Middle East, among others.

Founded in 2019 by Anuj Jain and Rachit Garg, Yojak is a full-stack platform for the construction industry. It works directly with manufacturers, and offers full-stack value propositions to smaller businesses.

The startup started laying off its employees from the second half of April and continued till May.  According to Inc42 sources, Yojak was anticipating an investment early 2022, but it didn’t materialise. Sources told Inc42 that employees from tech, design, sales, marketing, category, finance, operations, and logistics teams were laid off.

When contacted, the founder of the startup Rachit Garg too confirmed Inc42 about shutting down its domestic operations and the layoffs. However, he said that the startup let go of around 60 full-time employees. Besides, third-party workers were also laid off from the closed business unit too, he said, without sharing any numbers.

However, multiple sources told Inc42 that the count of the laid off employees was much higher than what Garg stated.

“We have scaled down our domestic business and (are) scaling up our overseas business…There is a significant fragmentation between domestic manufacturers and overseas buyers. Thus, we are moving towards creating digitisation between the two and helping Indian manufacturers excel. The company is well-capitalised currently and that bit has no role to play in this decision. Rather, it’s all about a new business direction for us. Before we took this decision, we shifted the relevant people to new departments as well, but unfortunately, had to let go of the rest,” Garg said.

Garg claimed that the employees were given a notice period of up to 2 months. “We have provided all of them with severance packages and are in fact helping them look for new roles as well, wherein many employees have secured their new job through our references,” he added.

However, one person, requesting anonymity, said that severance packages were offered to employees based on how long they had worked with the company.

Some of the impacted employees also told Inc42 that they haven’t received any severance package or health insurance coverage.

Though the situation in the startup looked precarious since the end of March, employees were given reassurance about their job security.

One of the impacted employees said that when he asked his manager about the startup’s situation, he was told, “Startup hai, aisa hota hai. Funding ajayegi.” (This happens in startups. Funding will come).

According to laid off employees, startup’s managers also cited the lack of funds as the reason for the layoffs.

Yojak hired a large number of employees in January and February as it was expecting a new round of funding, sources said, adding that this led to a 40%-50% increase in its employee benefit expenses.

“They should have at least waited for the funds to come. Between January and February it was hiring-hiring, and in April and May it was firing-firing,” said another person requesting anonymity.

Not only did the startup hire employees but also  started leasing new and bigger warehouses. A source told Inc42 that there was no need to increase the size or number of warehouses. Leasing warehouses not only meant paying high rent but also paying people to look after them.

The startup had around 8 to 10 warehouses located in various cities such as Chennai, Guwahati, Hyderabad, Vijayawada, Vizag, Patna, among others. Currently, only three warehouses are operational, the rest have been shut.

Rationale Behind Closing Its Domestic Business

Inc42 has learnt that Yojak hiked the product prices it supplied to small shopkeepers during the first three months of 2022 as the market started crashing in the backdrop of the Ukraine and Russia war.

“Initially we convinced our old customers to continue to buy from us at newer prices while the price at the market was lower, (but) later even they denied,” a former employee said, adding that in April there was no business.

The development comes almost nine months after Yojak secured funding. The startup bagged $3.8 Mn in a Pre-Series A round led by Info Edge Ventures in August 2021. The round also saw participation from Kae Capital.

It is worth noting that founders of Zetwerk, Bizongo, Blackbuck, Medikabazaar are angel investors in Yojak.

With the layoffs, Yojak has become the latest entrant to the list of ecommerce startups which have laid off employees in 2022. Prior to this, Meta-backed Meesho laid off 150 employees, and social commerce platform Trell let go of hundreds of employees.

Automobile marketplace Cars24 too fired over 600 employees in the past two-three months, while quick commerce delivery startup Blinkit let go of over 1,600 contractual employees earlier this year to cut costs.