Risky, Avoid, Miss: Infibeam’s Much Awaited IPO Gets A Thumbs Down From Analysts On Its First Day

Risky, Avoid, Miss: Infibeam’s Much Awaited IPO Gets A Thumbs Down From Analysts On Its First Day 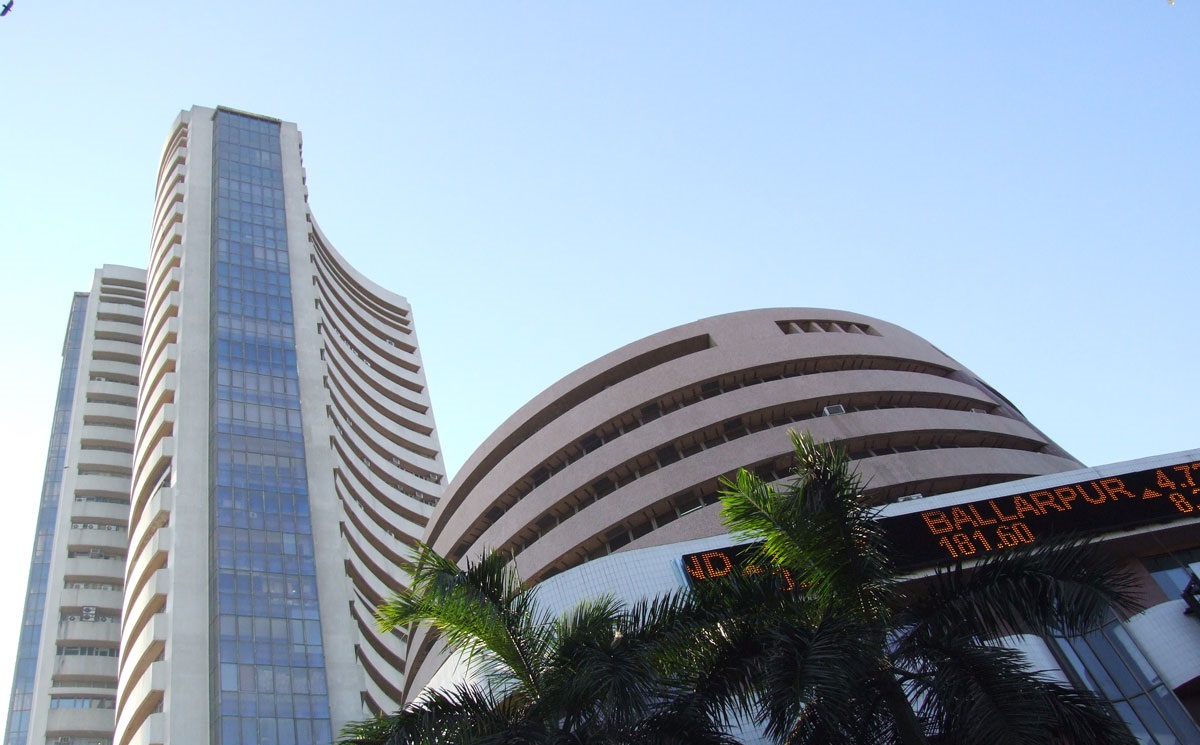 Infibeam Incorporation Ltd has earned the distinction of becoming the first Indian ecommerce firm to launch an initial public offering (IPO). But will it be able to earn the distinction of successfully carrying through the issue and raising the desired INR 450 Cr? Looking at the data of first day’s share sale, it appears that Infibeam’s ambitions might be thwarted by its steep valuation, especially at a time when the ecommerce sector is facing headwinds in the form of drying up of funds, marked-down valuations, and the fierce competition.

As per NSE’s data till 1700 hrs yesterday, the issue received bids for 26,44,792 shares as against the total issue size of 1,25,00,000 shares. This means that the INR 450 Cr. issue was undersubscribed at a measly 21% on the opening day. Investors’ disinterest in the issue is clearly visible from the low subscription percentages. The portion set aside for qualified institutional buyers (QIBs) was subscribed 22% and non-institutional investors received 21% subscription. Retail investors’ category was subscribed 17%. The company has fixed the price band at INR 360-432 per equity share for the IPO, which will conclude on March 23.

Founded in 2007 by Vishal Mehta, Sachin Dalal and Neeru Sharma, Gujarat-based Infibeam’s business can be divided into two parts- first the ecommerce website Infibeam.com which has more than 5,000 registered merchants and about 7.8 million active users as of December 31, 2015.  And second is their services business BuildaBazar (BaB) provides customisable digital solutions and other value added services to enable merchants to set up online storefronts. Infibeam competes with Flipkart, Amazon and Snapdeal, among others in the ecommerce space.

Infibeam plans to use INR 235 Cr out of the IPO proceeds to set up a cloud data centre and purchase property to shift the registered and corporate office(Ahmedabad). It also wants to use INR 67 Cr to purchase software and INR 38 Cr for setting up 75 logistics centres. The IPO will also add to the INR 70 Cr worth cash it already has on its books.

Why is that not many brokerages rated the issue and those that did mostly advised investors to avoid the issue? Let’s take a look at some of the factors which have affected the performance of the issue.

The Exit Of Two Investment Banks 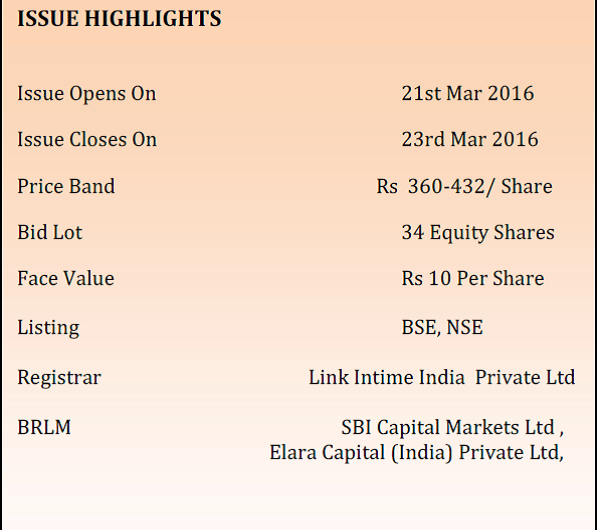 As per a Mint report, Kotak Mahindra and ICICI bank could not agree with the company on the valuation and pricing of the offer which led to a parting of ways as well as the timing of the launch, given the lull in the ecommerce sector. The exit of these two banks hinted at the fact that the issue would be deemed expensive, when valuations of biggies such as Flipkart are being marked down.

According to Angel Broking, “Even at the upper price band of INR 432, the company is valued at 5.2 times its sales, which is ‘steep’. Given that the company is still evolving, has an unproven profitability track record and the expensive valuation, we have a ‘neutral’ recommendation on the issue. Infibeam’s e-retail business has a similar model as Flipkart and Snapdeal, but is significantly smaller than the two dominant players which have strong PE backup. Its other business, i.e. BaB, in revenue terms is also smaller compared to global players like Shopify.com. Moreover, even if BaB business does gain dominant position in India, it is insufficient to justify the valuation.” 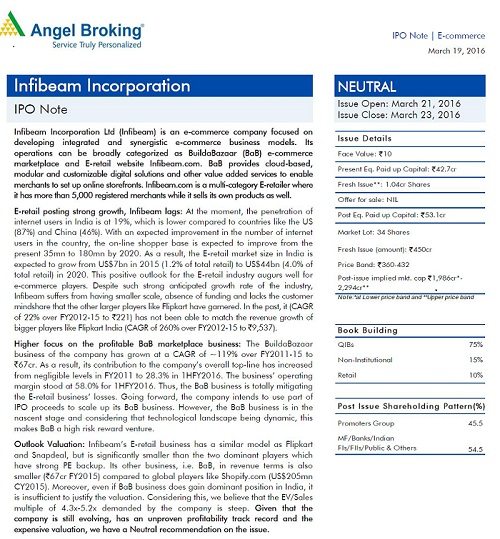 It added that Infibeam,

“Suffers from having smaller scale, absence of funding and lacks the customer mindshare that the other larger players like Flipkart have garnered. The company faces intense competition from players like Flipkart, Snapdeal, etc for its e-retail business, which entails heavier discounting to gain market share, thus resulting in higher operating losses for the business. The company has reported continuous losses from INR 18 Cr in FY 2011 to INR 10Cr in FY 2015. Although it has reported maiden profits amounting to INR 6 Cr in FY 2016, there lacks a proven track record in terms of profitability. Any unfavourable regulations for Internet and ecommerce industry can have a negative impact on the company’s business growth.”

Similarly, Hem Securities also asked investors to avoid the issue, stating, “Though the company has integrated ecommerce business model with a large merchant and customer base & has association with established brands but financial performance of company is not able to instil confidence of investing at present level. Also looking after the valuations of company, issue looks expensive at current level.” 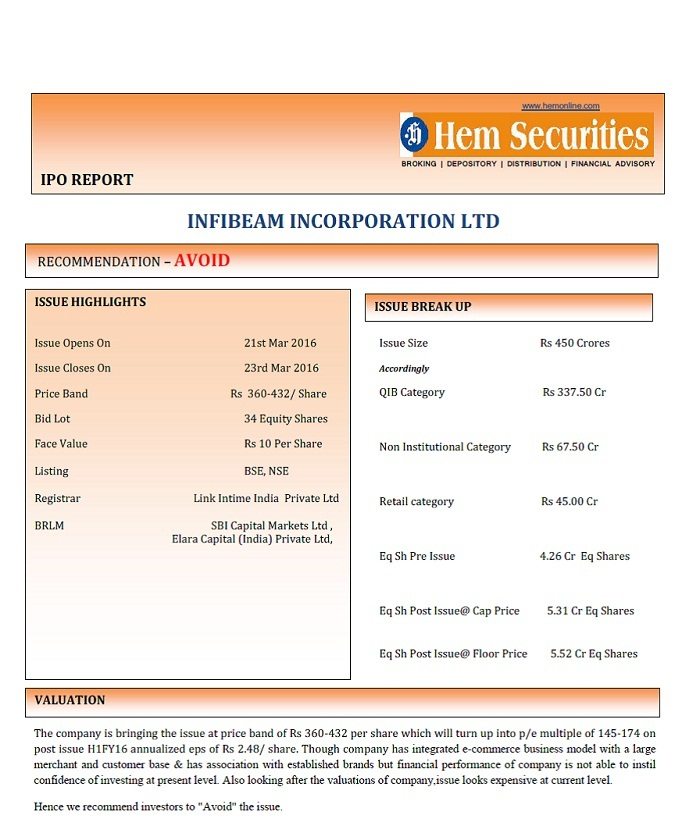 Similar sentiments were echoed by brokerage Elite Wealth Advisors which termed it as a risky bet. It stated ,

“Keeping in mind the current situation of the e-commerce industry when private equity (PE) investors are not keen to invest further into this segment, offer price of the IPO looks expensive.” 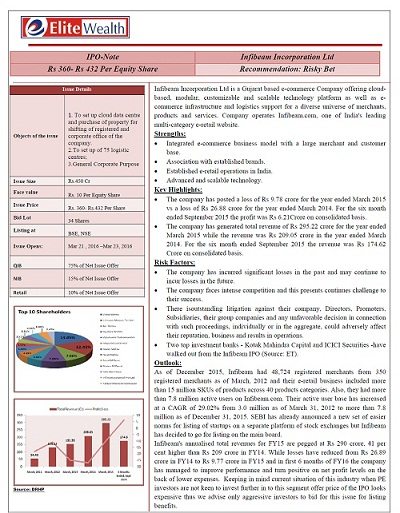 The brokerage added, “Only aggressive investors should bid for the issue for listing benefits.”

An IIFL report voiced similar sentiment asking  investors to give the IPO a miss. The report stated, “Unlike other ecommerce startups, Infibeam has opted to raise INR 450 Cr directly from the primary market. Notably, there were some instances in recent times, wherein valuations of e-commerce companies were either marked down in the unlisted space or have corrected in the global listed space. However, Infibeam has not compromised on its valuations. Furthermore, the exit of two investment bankers just before RHP calls for concerns. It will be a challenge for Infibeam to compete with the existing e-commerce giants. Furthermore, to raise additional funds in the future, the company may go in for equity dilution or increase its debt. This can be a cause of concern for investors.” 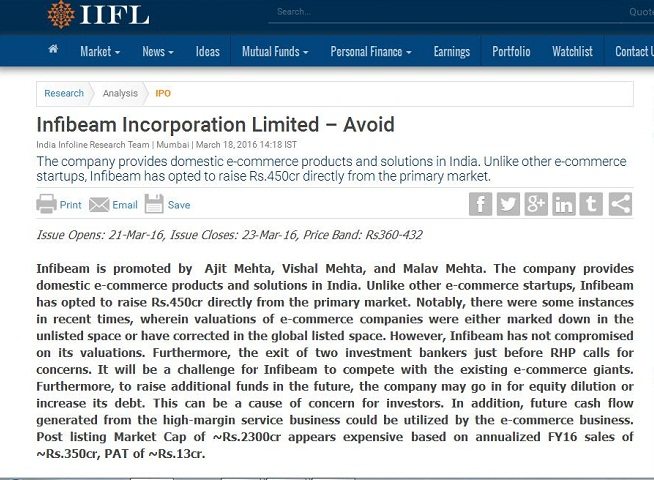 Yesterday a post on Medium written by Jayadevan, co-founder of FactorDaily (Ex-ET), pointed out how mysteriously the #ProudofInfibeam was trending on Twitter and unearthed the fact that a digital media agency has been paying social media influencers to promote the Infibeam IPO.

I am #ProudOfInfibeam for offering training & educational to merchants to help them improve online storefronts.

#ProudOfInfibeam as they are offering transparency to it's customers & investors by going public.

In a separate report filed by Mint, Infibeam clarified that it has not directly or indirectly paid to promote the campaign on Twitter. However, this kind of alleged propaganda at the time of IPO would only raise more doubts in the minds of the investors.

Intense Competition In The Ecommerce Sector

Valuing an ecommerce startup has always been tricky as one cannot be sure of how much premium can be given to them just on the basis of their GMVs. Unlisted ecommerce firms such as Flipkart and Snapdeal have grown by compromising on profits and on account of their ability  to raise several rounds of funding from international investors. Infibeam on the other hand has no such massive foreign fund backing. So, it would be a challenge to compete with these giants with limited funding. Additionally, it lacks the user base as compared to the two giants.

While it is praiseworthy that it has managed to turn in a profit after years of consecutive losses, its earnings for the next few years will primarily depend on its services business which is still small and the scalability of which remains to be seen. Its ability to continue to generate profits in the face of intense competition is also something which is on the minds of investors. Hence, expecting a market capitalisation of almost INR 2,300 Cr does seem pretty ambitious. Today’s and tomorrow’s share sales will reveal more if these ambitions would be realised or not.