The Indonesian tech startup market is continuously evolving with rapidly shifting economic dynamics. Many international players have understood the market’s importance by leading various partnerships in the country. Here’s our dedicated weekly review of the biggest startup news in the country.

FlySpaces, The Airbnb Of Coworking, Comes To Indonesia

Popularly called the “Airbnb for workspaces,” FlySpaces has been recently launched in Indonesia. The first FlySpaces office was launched in Philippines in 2015 and it opened a facility in Singapore in the same year, as well. It also offers coworking facilities in Hong Kong, Macau, and Kuala Lumpur. 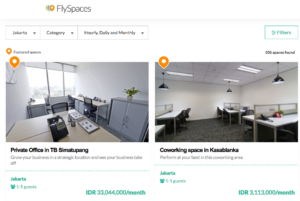 Working along the lines of an Airbnb, FlySpaces connects property owners and users who are looking for spaces with flexible arrangements. Users can find meeting rooms, desks in a shared space, or private offices, that can be booked according to their needs at a given time.

The company acquired Malaysia-based coworking space 8spaces for an undisclosed amount of cash and equity in November 2016. In early 2016, FlySpaces secured $500K in its Seed round of funding and, as per a Deal Street Asia report, plans to raise another round very soon.

As per a Deal Street Asia report, the Jakarta city administration has launched The Jakarta Creative Hub – a fully subsidised coworking space for young entrepreneurs. The move aims at solving the problems of affordable workspaces for budding entrepreneurs.

The coworking space will provide trainings, workshops, and conferences in addition to facilitating a place to work. It houses facilities such as 3D printers, woodworking, sewing, and fashion-sizing machines which entrepreneurs can use at a lower price.

The hub is located at Gedung Graha Niaga Thamrin in Central Jakarta and stretches up to 1,500 sq mts. It currently has 12 meeting rooms and classrooms. Residents who have Jakarta identification cards may apply to use the space and the hub’s management will then select entrepreneurs based on those applications.

The startup was founded in 2016 and is based in Jakarta. The funds raised will be deployed towards cultivating people’s interests in the professional gaming sector of Indonesia, as per an official statement.