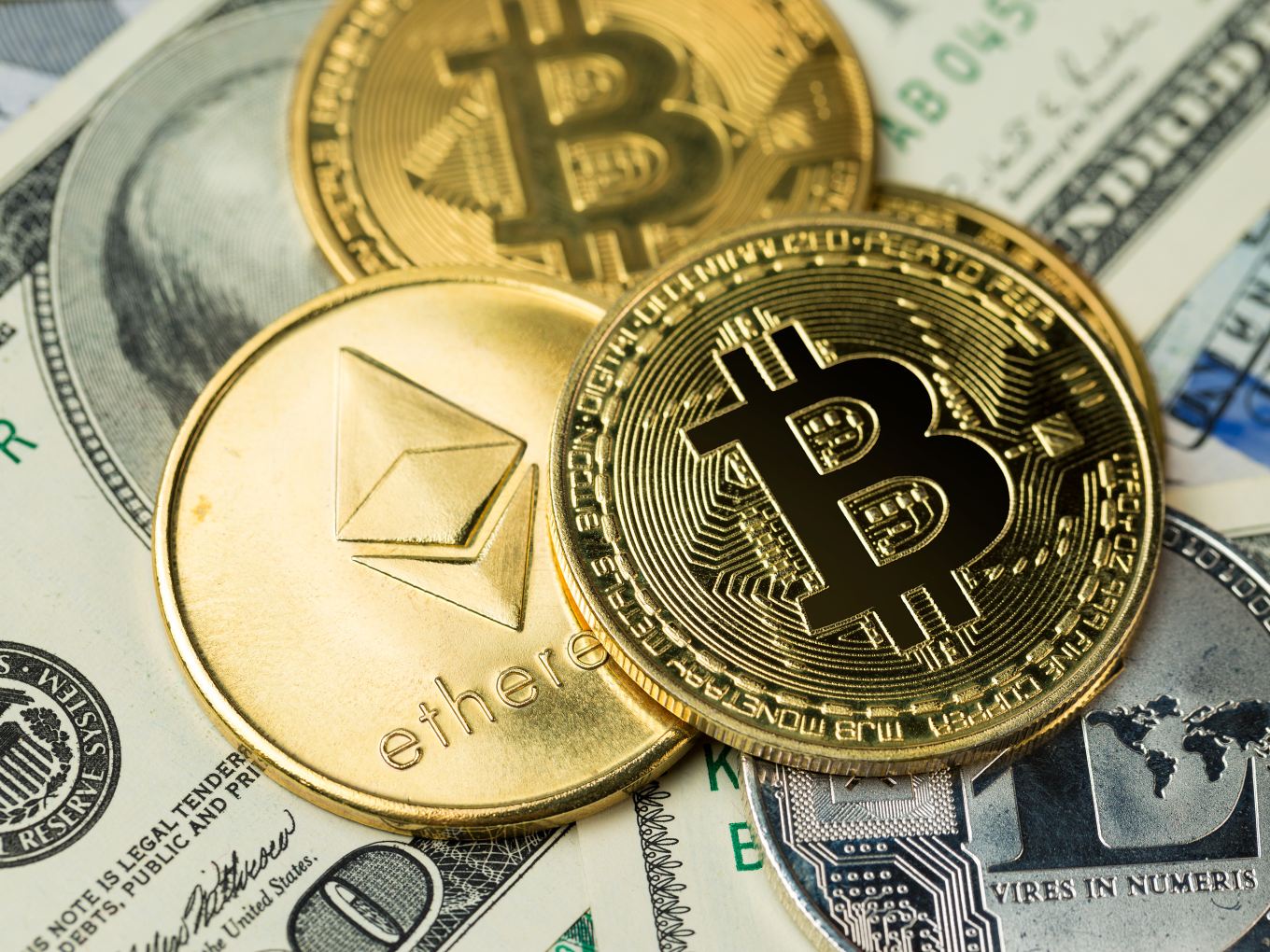 INDMoney users can invest in fractional shares of cryptocurrencies such as Bitcoin, Ethereum, Dogecoin, Ripple, Cardano and Uniswap

Instead of directly buying cryptocurrencies, users can invest through virtual holdings of these currencies that can be redeemed for cash

Cryptocurrency is clearly the flavour of the season with the rise of Dogecoin epitomising just how quickly it has entered the mainstream even in India. Despite no clear cryptocurrency regulations, interest around cryptocurrency such as Ethereum, Dogecoin (which is considered a meme crypto by most), Cardano (ADA) and others has definitely piqued the interests of India’s fintech startups. The latest to join the bandwagon is INDMoney, which has added fractional crypto investments with its TechStars partnership.

Using the in-app INDCoins rewards, INDMoney users can invest in shares of cryptocurrencies such as Bitcoin, Ethereum, Dogecoin, Ripple, Cardano and Uniswap. Founder and CEO Ashish Kashyap, who announced the launch on his Instagram feed, told Inc42, “Cryptocurrency is the asset of the future. We feel that it will become an important element in diversification of investment for our customers. And we have had many customers give us feedback about wanting to invest in crypto.”

Kashyap said the initial goal is to deliver a simple experience for investors who may not be familiar with crypto investments. The Gurugram-based investment tech platform has enabled fractional virtual holdings through TechStars, a virtual exchange, which facilitates trading in virtual fractional holdings of Apple, Amazon, Google, Microsoft and other tech giants as well as cryptocurrencies. 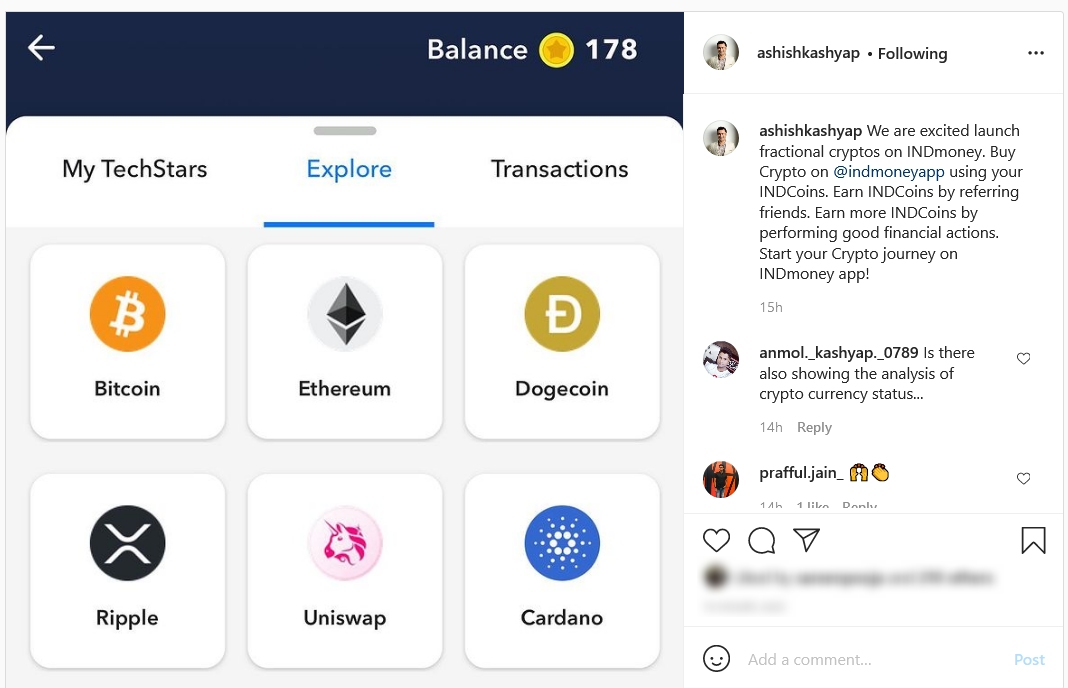 Founded in 2018 by Ibibo cofounder Ashish Kashyap, Pratiksha Dake and Varun Bhatia, INDMoney is a personal financial advisory agent, which offers advice across asset classes, loans, and tax management. It enables consumers to organise and track their wealth across investment avenues such as fixed deposits, ETFs, mutual funds and more.

While the company has started with its proprietary INDCoins for the crypto investments, the plan is to broaden this to the extent that is allowed by any potential regulations for cryptocurrency.

“We will be enabling customers to buy crypto assets using fiat currency like INR. This will be going live in four-six weeks. We have taken a scalable approach with the INDCoins, which can be extended as we know more about the regulations,” INDMoney founder and CEO Kashyap said.

He added that INDMoney would also be adding a cryptocurrency wallet so customers can invest in real holdings and not just fractional virtual holdings.

In the case of INDMoney, redemption of the investments is possible, but it does seem a lot more complicated than it should be if the goal is to familiarise its user base with cryptocurrency. Users need to sell their virtual holdings on TechStars to get INDcoins in their INDMoney account. Alternatively, they can get cash in their accounts by transferring the virtual holdings to a friend who has to then claim those virtual holdings. Another option is the real monetary value of the INDcoins would be credited to the user’s bank account. Presently, the value for redemption on TechStars is 10 INDcoins is equal to INR 1.

The foray into crypto, INDMoney’s Kashyap highlighted, was prompted by customer feedback across channels. “Our goal is to cocreate with customers. When we read all the feedback on our app store and other channels, we saw users need a one-stop shop for all investments.”

While some have derided these fractional holding models as not being real cryptocurrency investments, they have massively increased the addressable base by making it easy and affordable for Indians to invest — even though there are several challenges still to overcome.

For example, CoinSwitch Kuber claims to have over 4 Mn users in India and is targeting to cross 10 Mn users by the end of 2021 on the back of mainstream promotions. It crossed $4.2 Bn in transaction volume in February 2021. In the growing Indian crypto market, CoinSwitch competes with several other homegrown exchanges such as WazirX, CoinDCX, Unocoin and Zebpay, among others.

Given that cryptocurrency is currently a self-regulated market (i.e. no overarching regulations from RBI or SEBI), there are a variety of models at play. Fractional investments in cryptocurrency is essentially what CoinSwitch Kuber, CoinDCX, WazirX and other exchanges in India offer. Crypto investors can buy up to 0.00000001 of a virtual holding (up to the eighth decimal). Investors are allowed to ‘withdraw’ these investments to external crypto wallets for a fee, which is usually quite steep.

Essentially, fractional investments are used for trading between cryptocurrencies, or cryptocurrency-based fixed deposits and loans, as in the case of Bengaluru-based Vauld (formerly known as Bank Of Hodlers).

Other investment tech and fintech platforms are also exploring cryptocurrency as an investment class or a way to drive activity. Fintech company CRED partnered with WazirX last month to offer Bitcoin as a reward as part of a promotional campaign. With the crypto industry hopeful of regulations, will widespread adoption of crypto be the key to finally bringing it to the mainstream and out of the shadows?

Will Crypto Regulations Come At The Right Time?

INDMoney’s Kashyap strongly believes that regulations will come in for crypto just as it has for all investment asset classes. While he did not speculate on how the regulations will play out, he was confident that the industry will grow on the back of these rules, and there will be opportunities for INDMoney to partner with dedicated crypto platforms too.

In recent weeks, Indian cryptocurrency exchanges have alleged that payment gateways are blocking their transactions on instructions from some of the country’s leading banks. “Confusion in India’s banking industry is hurting 1.5 Cr Indians in crypto,” Nischal Shetty, cofounder and CEO of Mumbai-based cryptocurrency exchange WazirX wrote on Twitter earlier this week.

Kashyap believes that the current roadblocks will be cleared for all kinds of crypto operations in due time. It will pave the way for more innovation around cryptocurrencies, he said.

While in 2018, the Reserve Bank had barred banks from providing services for cryptocurrency trading and to crypto companies, this was overturned by the Supreme Court in March 2020. The SC had called the RBI bar as ‘unconstitutional’, but one year later, banks are still wary of providing financial services to crypto exchanges. At the same time, the National Payments Corporation of India (NPCI), the umbrella body for retail and digital payments, has refused to block fund movements for cryptocurrency trades and has left it to each bank’s risk and compliance team to take the call. Naturally, confusion abounds for the crypto industry.

“Ideally, it would help the industry if RBI could give some clarification. As currently, banks are not willing to provide access to the crypto industry due to confusion about whether they’re allowed to service the industry or not. If the RBI could clarify its stand to all the banks under it then that would tremendously help this fast-growing sector in India,” WazirX’s Shetty told Inc42 earlier this week.

Lobbying efforts from the industry continue to call for regulation so that crypto companies can go about scaling up their businesses and driving economic value. IndiaTech.Org — an industry association representing India’s consumer internet startups, unicorns and investors  — has proposed a five-point recommendation on boosting India’s cryptocurrency economy potential to 12 government departments such as the income tax department, ministry of corporate affairs, and other bodies including the Reserve Bank of India.

The proposals have been made to bring in more clarity over various aspects related to cryptocurrency investments, taxation, transaction traceability and money laundering. The association has also demanded that crypto companies be recognised as startups.