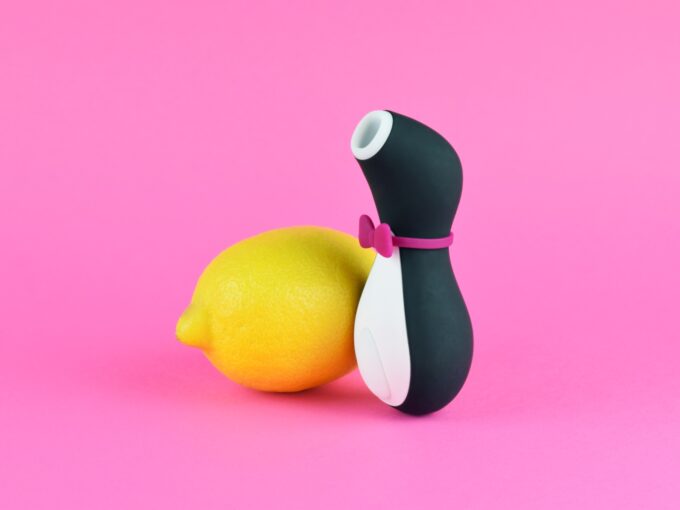 A recent Inc42 report also revealed how Indian OTT platforms wholly specialising in the adult or 18+ genre witnessed a 70-80% surge in website visits during the lockdown. And now, supplementing the same trend is the growth in sales for sexual wellness products in India post the lockdown.

An annual report released by ThatsPersonal.com, an online store selling sexual wellness products, has revealed that the company witnessed a 65% growth in India sales post the lockdown when the delivery of all items was permitted. The growth became visible after comparing the sales in the last 43 days of the second quarter (Q2), from May 18 to June 30, with the first 43 days of quarter one (Q1), from January 1 to February 12. This methodology was adopted since the company’s warehouse was shut from March 20 to May 18 with no deliveries taking place because of the coronavirus pandemic and the resultant countrywide lockdown.

There’s a whole range of data points mentioned in the report that would help one gauge India’s obsession with sex toys and recreational products, even though these products are still considered taboo by and large in Indian society.

Of the most purchased sex toys, massagers and male penile pumps rule the roost, comprising 19% and 16% of the total sales of sex toys in India. The other products that figure in the list include male and female performance enhancement products, pleasure rings, strokers and lingerie. 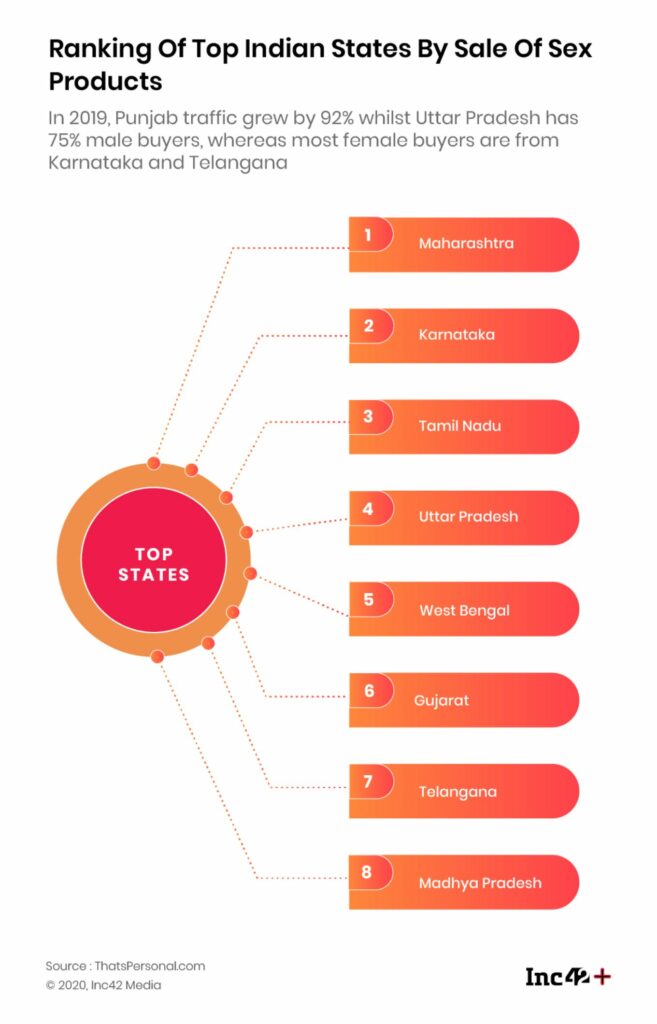 Maharashtra & Mumbai On Top In Sale Of Sex Toys

In terms of the sale of sexual products, Maharashtra emerges on top, followed by Karnataka, Tamil Nadu and Uttar Pradesh. Tellingly, Uttar Pradesh has 75% male buyers, while nationally, 66% of buyers for sexual products are male, and the remaining 34% are female.

The report also mentioned that most of the female buyers of sexual wellness products are from Karnataka and Telangana. To perhaps make up for the lack of access to sexual wellness products, old Nokia 3310 phones are the most preferred sex toys among women in India, among other unconventional alternatives — according to an IBTimes report.

Among the metro cities, India’s financial capital Mumbai ranks number one in terms of sales, followed by Bengaluru, New Delhi and Pune. The report also ranks Tier 2 and Tier 3 cities. While Lucknow ranks number one among Tier 2 cities, Panipat ranks at the top among Tier 3 cities. Interestingly, Panipat is among the few cities where female buyers outnumber male buyers. The other such cities mentioned in the report include Jamshedpur in Jharkhand, Belgaum in Karnataka and Imphal in Manipur, among others.

The growing interest in sexual wellness products wasn’t just seen in the period post the lockdown. The report also said that other festive occasions have seen a spurt in demand for sexual wellness and recreational products. These include Valentine’s Day, Women’s Day and Navratri when the sale of sexual wellness products saw a more than 30% hike. Further, media and entertainment were seen to be playing an important role in enhancing acceptance for such products among the masses.

The report mentioned that the company saw a 54% increase in searches for ‘sex toys for women’ around the release of the Bollywood film ‘Lust Stories’, which featured one of the female protagonists of the film using one such toy. 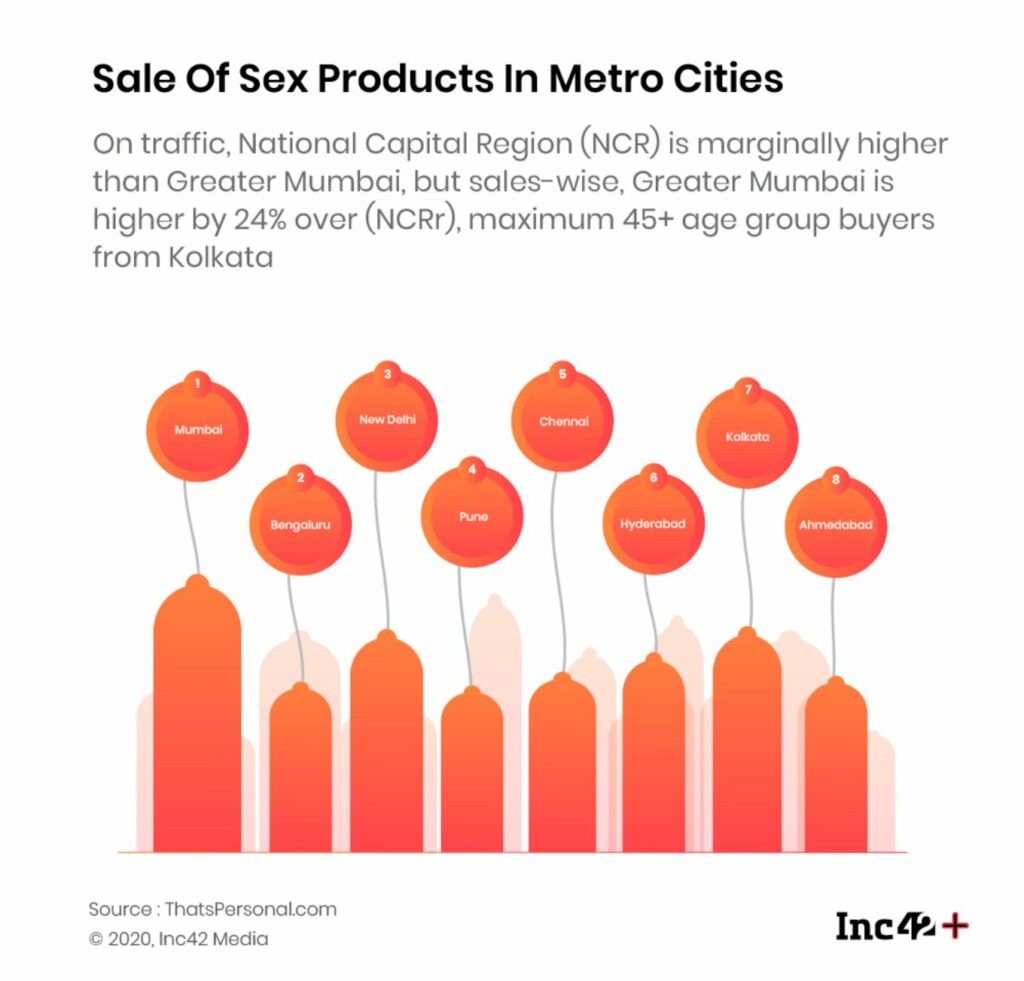 ThatsPersonal founder Samir Saraiya said that the most fascinating part is seeing the way Indians are buying sexual wellness products, especially the variations across different parameters like age groups, genders, cities and towns. “The buying habits of different communities are always interesting and we strive hard to make our offerings in tune with Indian sensibilities, customs and traditions,” Saraiya told Inc42.

He attributed the significant growth over the last few years to the launch of Jio and drop in mobile tariffs which have helped increase access to the internet. “Recently, we have hit new traffic records as this has been fuelled by the coronavirus lockdown and significant uptake in ecommerce sales. We have been averaging approximately 35% growth in terms of CAGR and expect this trend to continue this financial year.”

A similar trend for growth in sales after the lockdown was also witnessed by Kaamastra, another Indian ecommerce startup selling sexual wellness products. Founder Rahber Nazir told Inc42 that Kaamastra lists more than 4000 sexual wellness products. He claimed the company witnessed a 20% growth in sales once the lockdown opened. “Compared to going out, buying sex toys or couple products can cost as little as INR 500 and offers many fun nights,” said Nazir, adding, “The demand for categories such as sexual performance supplements was much higher.”

Moreover, Kaamastra, which allows its customers to get advice related to sexual health and wellness and products, saw a 25% growth in phone inquiries during the lockdown. Nazir also claims to have seen a 30% growth in website visits, with sex toys seeing 45-55% growth in searches. “The lockdown has been good for business although our deliveries and operations had an impact. Overall, we saw increased customer demand and interest,” he added.

Clubbed under sex toys, sex therapists and performance enhancers, the global sexual wellness market was worth $39.42 Bn in 2017 and expected to grow at a CAGR of 13.4% to reach $122.96 Bn by 2026. According to a Reuters report, this huge growth will be led by the Asia Pacific and within this larger region, the likes of India, China, Japan, and South Korea are key market drivers.

The sexual wellness market in India is on an upswing according to key players in the segment, due to increased internet penetration, growing openness among the youth about sex and the proliferation of sexual products through digital media.

However, ambiguity about the legal status for such products remains. This is because under Indian law, ‘obscenity’ is an offence. Although, there is no clear definition in Indian law for what constitutes ‘obscenity’. Section 292 of the IPC and section 67 of the IT Act, (which corresponds to section 292 of the IPC) explain ‘obscenity’ to mean anything, which is lascivious or appeals to the prurient interest, or if its effect is to deprave and corrupt persons. It doesn’t take a legal expert to understand the very subjective interpretations which could arise from such a definition of obscenity.

Nevertheless, barring the confusing legal grounds for obscenity, the sexual wellness industry is poised to grow at a quick pace in India. Saraiya attested to the same. “We have seen strong growth year on year primarily due to macro-economic factors like smartphone penetration that have driven ecommerce adoption. Globally, sexual wellness has been one of the fastest-growing categories in ecommerce as it solves a genuine customer purchase issue of privacy. We hope to see the same in India and look forward to catering to the country’s sexual wellness needs in future,” he said.