Indians Willing To Pay For Connected Cars, But Apprehensive About Data Misuse

Indians Willing To Pay For Connected Cars, But Apprehensive About Data Misuse

The study reveals that 69% of Indians are apprehensive about the misuse of their data, once they start using connected cars

According to the study, 40% of Indians would consider buying a hybrid, or battery electric vehicle

The Indian consumer’s willingness to pay for advanced technologies such as connected cars has grown over the years, according to Deloitte’s Global Automotive Customer Research for 2020.

A connected car is one with access to the internet through its own Wireless Local Area Network (WLAN). This allows the car to share internet access and data with other devices, both inside and outside the vehicle. Theoretically, while sitting in a connected car, one could inquire from their fridge if they are low on milk. The same could then be ordered from the nearest store.

By 2025, most cars in India are expected to be connected to the owners’ homes and offices. Such cars would be enhanced with partnerships between original equipment manufacturers (OEMs) for cars and insurance companies. The OEMs would supply the insurance companies with data, which the insurance providers, in turn, may use to design specialised products to fulfil your specific needs. 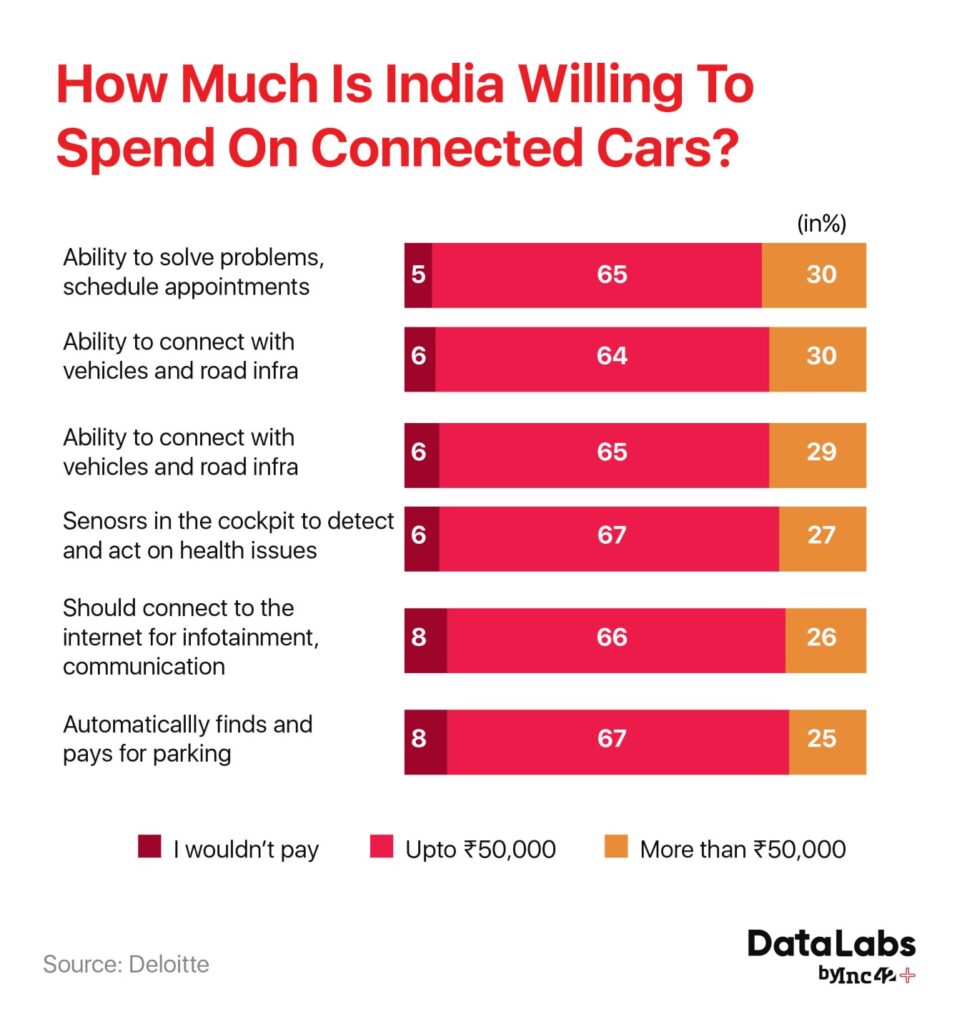 The Deloitte survey reveals that two out of three Indians are willing to pay up to INR 50,000 for connected cars.

While the willingness of Indians to pay for connected cars has grown from 2017, according to the survey, 69% of Indian consumers are also apprehensive about their biometric data being misused by external parties, once they start using connected cars.

Till date, connected car technologies in India have witnessed just 5% penetration in the case of infotainment systems and digital cockpits. Moreover, such connectivity is largely seen between users’ smartphones and in-car services.

Rajeev Singh, partner and automotive sector leader at Deloitte says, “The need for being connected is a lot more now than what it had been in the past. The era of a chauffeur-driven car will be a thing of the past.”

The survey also attempted to gauge the consumers’ mindset about electric vehicles (EVs). According to the study, 25% of Indian consumers would consider buying a Hybrid Electric Vehicle (HEV) for their next vehicle, while 15% would consider buying a Battery Electric Vehicle (BEV). Around half of Indian consumers would still prefer to buy a vehicle with an Internal Combustion Engine (ICE).

The Indian consumers’ mindset regarding EVs holds a lot of weight, as the NITI Aayog has set an ambitious target of 30% transition to EVs for private cars, 70% of commercial vehicles, 40% of buses and 80% of two- and three-wheelers by 2030. According to a NITI Aayog study, India could save up to 474 Mn of tonnes of oil equivalent (Mtoe) and 846 Mn tonnes of net CO2 emissions if it manages to realise its EV ambitions. However, given the fact that India still has a largely coal-powered electricity grid, and taking into account the carbon emissions during electricity production, EVs may not be as green and eco-friendly in the Indian context as they are made out to be.