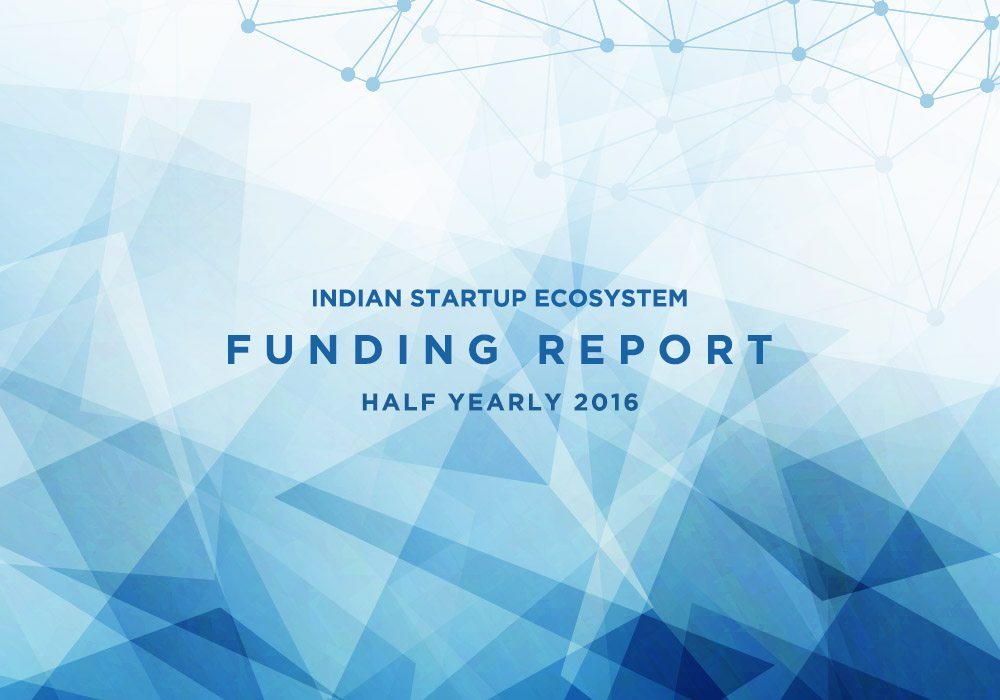 The first half of 2016 passed by and as we step into second half of 2016, let’s have a look at the performance of H1 2016. Over the months we have been observing a number of change in the ecosystem, questioning and highlighting various trends and activity. What happened to the so called startup bubble? Which city is the best startup destination: Delhi/NCR or Bangalore? Is the Bangalore ecosystem saturating? What is the most trending market: Ecommerce, FinTech or HealthTech? Is there any new industry coming up? Who are the hottest investors in the ecosystem? How is the M&A market changing?

Finally, as the second quarter of 2016 ends, we have enough data to conclusively answer few of the questions that our monthly reports couldn’t.

2016 has been tough on startups in terms of the total deal value. More than 18 startups shutdown in these 6 months with yet another 6 months to go, while, in 2015 only 15 startups shutdown. Flipkart shut down its grocery delivery division Nearby that was launched in October last year in Bangalore. Ola shut down its food delivery service ‘Ola Cafe’, and grocery delivery service ‘Ola Store’. On-demand grocery delivery startup PepperTap roll-backed its consumer-centric grocery app and pivoted to a full stack ecommerce logistics company. Helpchat did yet another pivot closing its entire chat-ops, moving towards a chat-less service.

So many changes observed in the first half of 2016, it is surprising to find out few of the trends originated in 2015 itself. In this first half of 2016, we observed 538 startups that raised funds with a disclosed deal value of $2.4 Bn, out of which, 253 startups were funded in Q2 of 2016 itself raising close to $1 Bn (disclosed).

Lets have a look at the numbers and the key findings!

The Rise and Burst of the Bubble

From the half yearly plots of deals between 2015-2016, the rise and fall of the bubble is quite evident. H2-2015 witnessed the peak of the bubble receiving all the big ticket deals: Flipkart, OYO, Pepperfry, Saavn, Snapdeal, Ola, Paytm, Grofers. Together they accounted for nearly $3 Bn of the funding bubble. In H1-2015 to H2-2015 the rise of the bubble saw a soaring 50% increase in Deals and 64% increase in Deal value. While, in H2-2015 to H1-2016, the bubble burst and the total deal saw a whopping 53% drop, while number of deals remained almost the same. 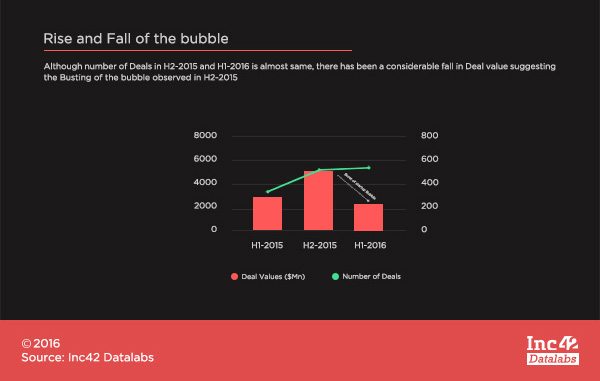 In this month’s report we confirmed our observation of lack of big ticket funding in the late stage. The trend has been quite steep from Q3 2015. 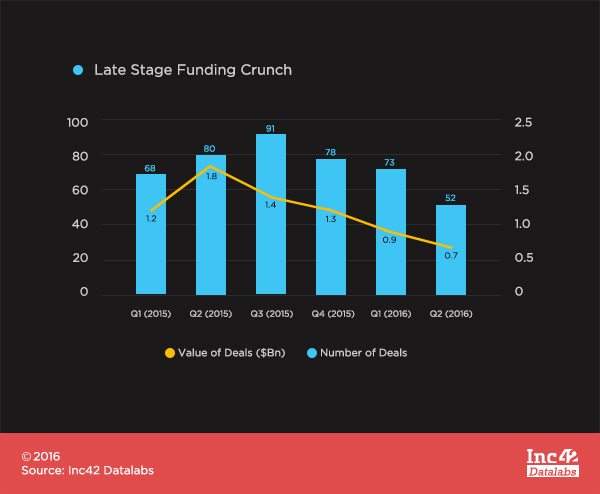 The Era of Bridge Funding

It seems we have stepped into the the age of Bridge funding. There has been definitive fall in Series A and Late Stage deal value, while, a surprising rise in Pre-Series A funding or Bridge Funding: 123% by Total Deal Value and 542% by numbers as compared to H1-2015. 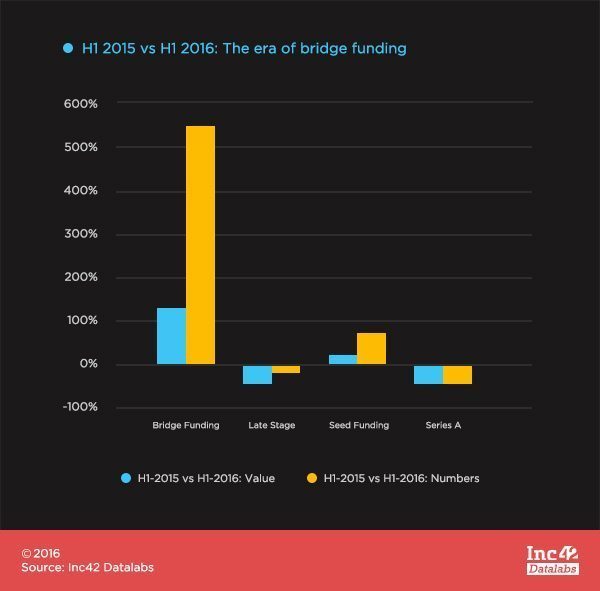 Delhi/NCR – Top Startup Destination. But! For how long?

We have been talking about the rapid rise of startup funding in Delhi and even observed a month where Delhi actually dethroned Bengaluru. But, those were just monthly observations. Now, going by deal value Delhi has been on top since Q3 2015. Bengaluru actually temporarily took back it’s #1 spot from Delhi only for Q1 2016 as Delhi gained back its position in Q2 2016 by 25%.

Also, the trend suggest the number of deals in Delhi that rose from H1 to H2 2015 by 85%, has taking a dip from H2 2015 to H1 2016 by 7%. Although, a drop by 7% may not seem significant, but, Bangalore has been steadily rising in deal number. Will it be able to take back it’s place from Delhi yet again, we have 6 more months to see before making our conclusion.

Although it continues to be the top market for funding, its share has been decreasing steadily since Q4 2015. Instead, we are observing the rise of HealthTech and FinTech to prominence. 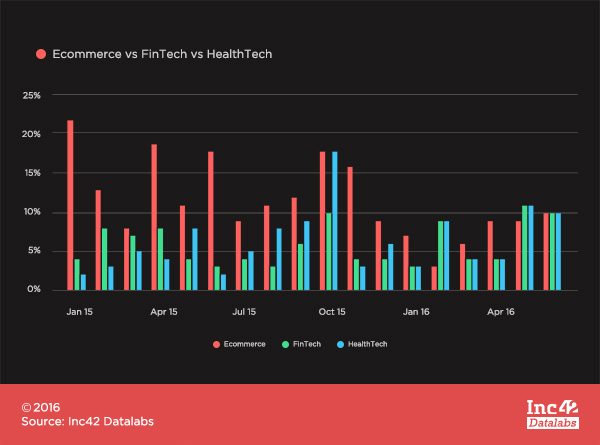 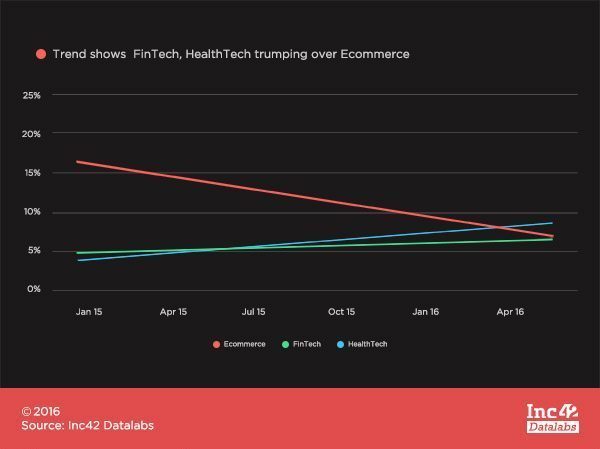 SaaS and Enterprise Tech came up to replace AdTech and MarTech industry. However, the trend suggests the fall of SaaS. This, is further confirmed by M&A trend for 2015 that shows SaaS based companies getting acquired. This is quite contrary to the so called shift in funding from B2C to B2B companies that many investors and outlets have been claiming! 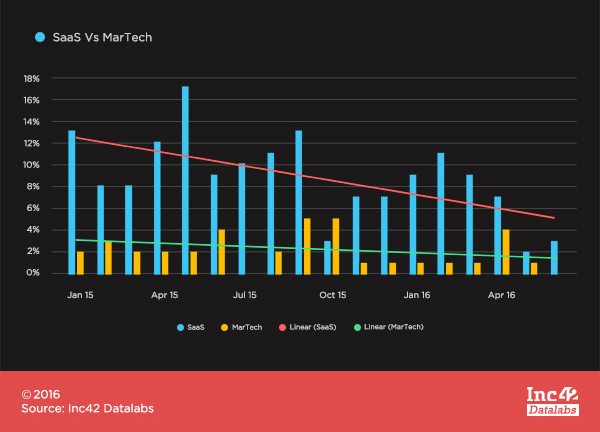 Analytics has seen a steady rise, given more business are relying on stats for decision making. 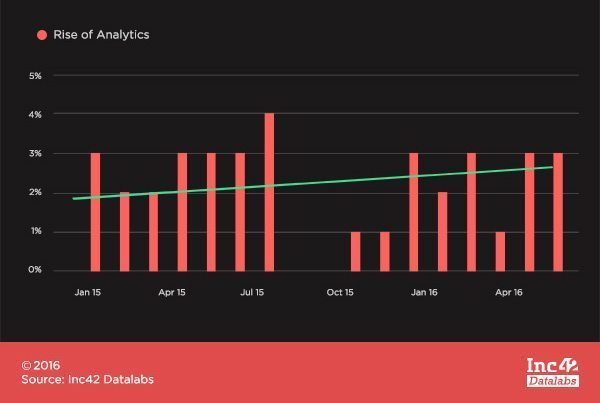 Rise of AI and VR

Artificial intelligence and Virtual Reality startups are showing a gradual rise given its prospects. However, funding is quite low as the market is quite nascent. 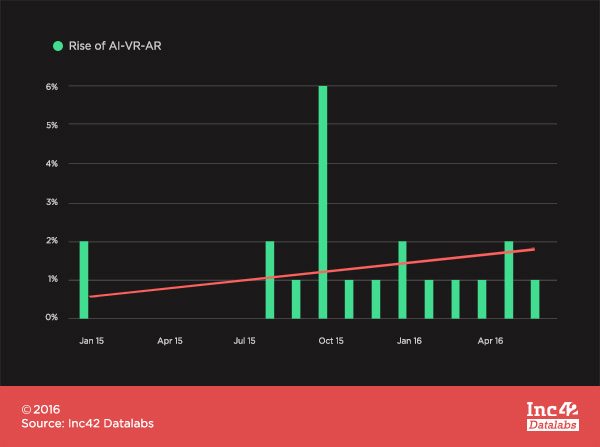 We have been talking about IoT in Indian market for quite some time. However, trend shows that the market has been pretty stagnant throughout the past 1.5 years. 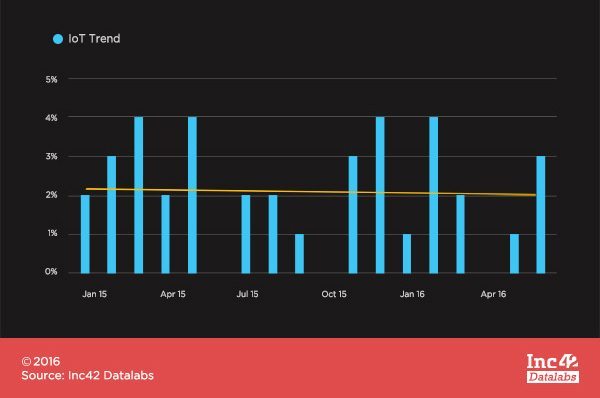 Hyperlocal has been the center point of the startup bubble in India. It let to creation of some giants in the hyperlocal sector along with lots of smaller players, given the scope of the market. This year, we have observed highest number of M&As in Hyperlocal Sector (16% ), furthermore, the ticket size of the deals has been less, suggesting, hyperlocal market would move towards saturation over the next half of 2016. 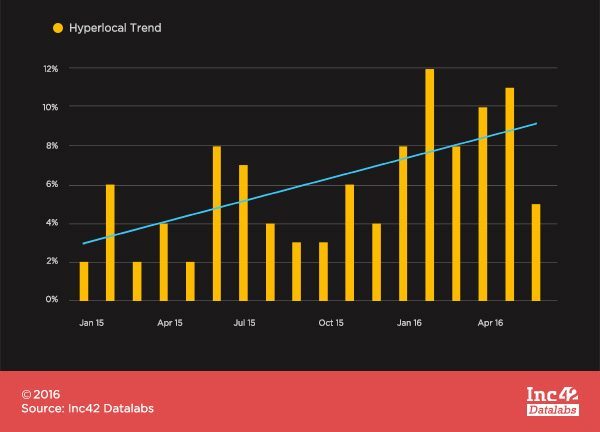 The number of investors has drastically fallen since Q4-2015. There has been a steady drop in their numbers since Jan-2016. Although market is a bit bullish in terms of number of deals but investor confidence seems bearish. 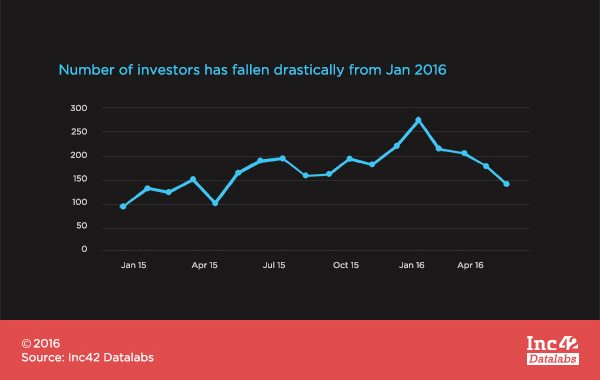 Survival of the Fittest

With so many startups in the market, there is bound to be a struggle for survival where smaller players would perish or get imbibed into bigger ones. This Half of 2016, we have already observed 18+ shutdowns and 77 M&As (51% increment from H1-2015). 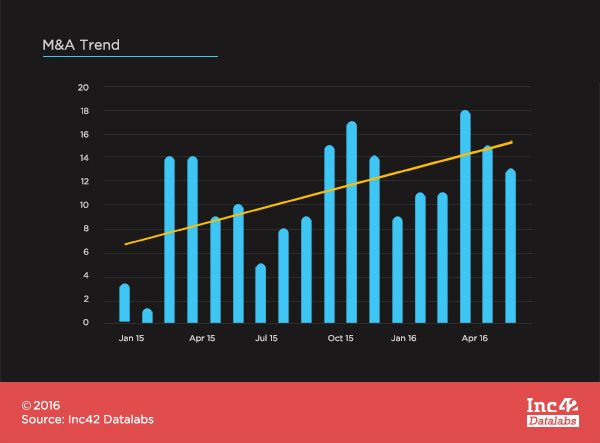