This week, we looked at FY19 performances of Square Yard, Fresh Menu, CarDekho and more 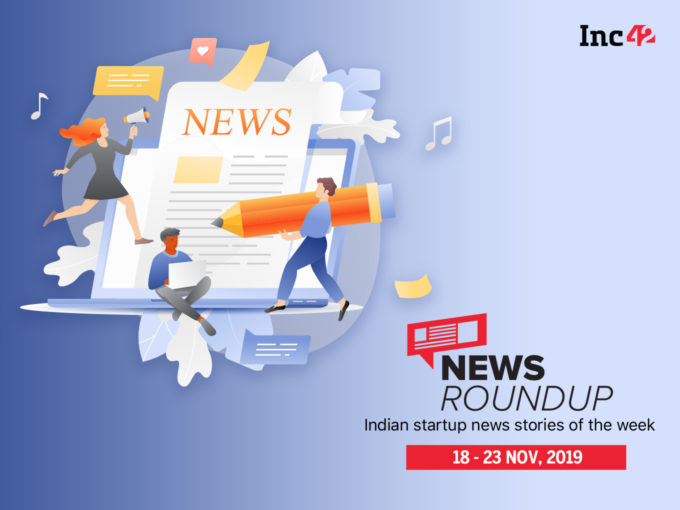 In one of the most important developments this week, the department for promotion of industry and internal trade (DPIIT) has proposed to reduce the compliance time for Indian startups in its drafted Startup India Vision 2024 document.

To boost the tech industry in India, the government has laid out plans to offer incentives to 324 companies including US-based automotive and energy giant, Tesla and UK-based pharmaceutical major GlaxoSmithKline (GSK) to set up manufacturing units. Not only this, in the next five years, SEBI will be spending INR 500 Cr in IT infrastructure and technological innovation.

In another interesting development, Raebareli (Uttar Pradesh) railway coach factory is set to be modernised with the introduction of humanoid robot ‘Sona 1.5’ to transport documents and greet visitors. The humanoid robot was built by Club First Technologies, who also demonstrated the product on November 18.

Around 35 vendors had filed an FIR for unpaid dues against Doodhwala founders. Over a dozen employees have alleged that the company owes up to INR 20 Lakh in salaries. Doodhwala had been unable to raise funds and had to wind down operations in October.

What Social Media Players And Apps Were Up To?

Opinions From The Industry Leaders

The online travel aggregator MakeMyTrip (MMT) plans to expand its reach in the growing homestay market in India by adding more private properties, villas and apartments in the next one year. The decision came to light after MMT decided to aggressively capture the market on par with US-based Airbnb and startups alike. The company plans to focus on leisure destinations such as Goa, Coorg and Manalu, apart from its metro cities expansion plans.

The popularity of Ola’s ride sharing application comes to light after its launch in the international markets, including markets such as the UK, Australia and New Zealand. It currently operates in more than 20 international cities. Launched in 2010, the company has come a long way from where it all started. The Bengaluru-based cab sharing application has now entered the list of top five ridesharing and taxi apps downloaded globally.

According to one of the media reports, Ola is the fourth most downloaded ride-sharing app internationally. On Google Play Store, the app was also the third most downloaded app.

K N Govindacharya, a former Rashtriya Swayamsevak Sangh (RSS) has urged the government to expedite the passing of the personal data protection bill (DPB). Govindacharya wrote a letter to Shashi Tharoor, the chair of the parliamentary standing committee of IT that the WhatsApp matter must not be buried like other spying incidents.

Recently, Govindacharya filed a petition in the Supreme Court after the WhatsApp spying controversy. In the petition, it urged WhatsApp to give a reply within four days, and he also proposed data protection law is getting skewed, day by day.

The parent company of short-video app TikTok and vernacular social media platform, ByteDance will be entering the music streaming market soon. The app is expected to be launched early next month. Conversely, the Chinese company ByteDance is already in talks with the three major record labels — Universal Music, Sony Music and Warner Music, for licensing deals. These record labels control nearly 90% of the global music industry.