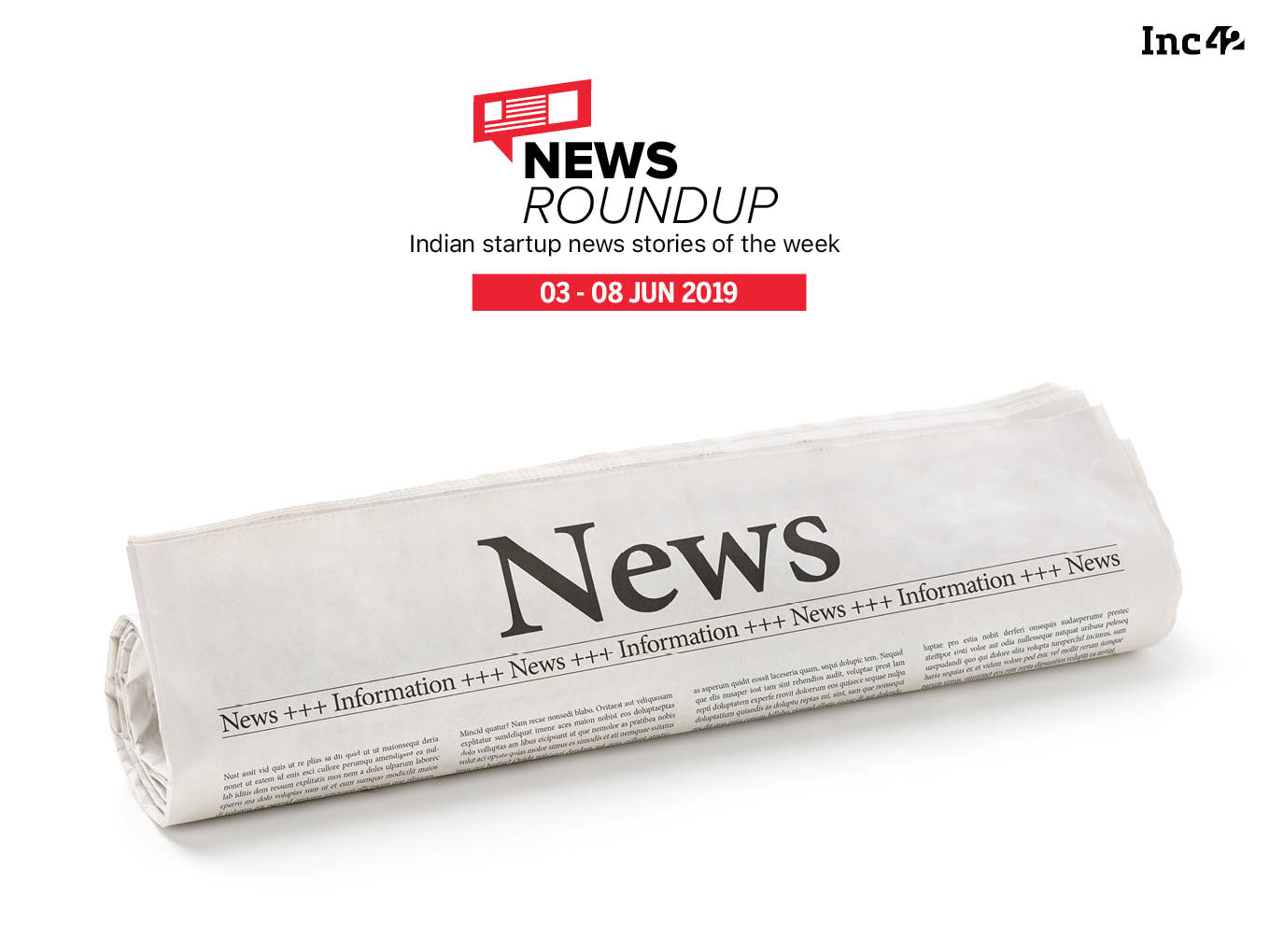 There’s a lot that happened this week in the Indian startup ecosystem. Interestingly, a recent analysis revealed that almost all the twenty-five cabinet ministers under the India’s newly elected government including the Prime Minister Narendra Modi have verified twitter accounts, except Arjun Munda and Prahlad Joshi, whose twitter handles are yet to be verified.

Also, DPIIT has announced that it will expand its operations to the district level where many businesses constantly need licenses, NOCs, and renewals — to make it easier for them to do business. Ramesh Abhishek announced that states have been asked to share the ranking of districts based on a framework shared with them.

India will maintain its stance on not framing global rules on ecommerce at the G-20 Ministerial meeting on trade and digital economy at Tsukuba City, Japan. It will also be Piyush Goyal’s first international engagement as the newly appointed commerce & industry minister. Reportedly, Piyush Goyal will be arguing that it would be premature to go in for multilateral rules on e-commerce as the sector was still evolving.

The Reserve Bank of India has recently removed charges levied for transactions done through Real Time Gross Settlement System (RTGS) and National Electronic Funds Transfer (NEFT). Also, in a move to lead a tenfold increase in per capita digital transactions in three years, Nandan Nilekani-led Reserve Bank of India (RBI) committee has suggested removal of 18% import duty on point-of-sale (PoS) devices for three years, and also reduce the goods and services tax (GST) on digital transactions to boost acceptance of digital payments among the users. It has also recommended a cut of 15 basis points (one basis point is equivalent to 0.01%) on the interchange rate on card payments

The National Payments Corporation of India (NPCI) is now looking to leverage the potential of ecommerce marketplaces, Amazon and Flipkart, for next phase of growth of Unified Payments Interface (UPI). The NPCI is looking at Amazon and Flipkart to enable online payments only after the product is delivered. the money will be credited to e-tailers only after the delivery is confirmed by the consumers. At the time of purchase, UPI would create the escrow-like account where the money for the order would be parked. Once the order is confirmed, the payment will be transferred then. However, this plan may reportedly take six-eight weeks to roll out.

Zomato Vs Swiggy: What’s Cooking In?

Are Ola And Uber Losing Their Edge?

PolicyBazaar had obtained an ex-parte injunction in a trademark infringement case against Acko on May 16.  In response Acko, told the court that PolicyBazaar has “concealed and distorted material facts, made misrepresentations and false statements” to obtain the ex-parte ad-interim injunction.” Further court proceedings showed that PolicyBazaar itself had been using Acko’s name in its website’s keywords. The court has thus asked PolicyBazaar to deposit INR 5 lakh with the Prime Ministers Relief Fund and other Rs 5 lakh with Delhi Legal-Aid Services Authority.  It has also asked PolicyBazaar to submit an unconditional apology and an undertaking in court.

Google Pay Claims Top Position In UPI Transactions In May

Online travel marketplace ixigo is now venturing into digital content space with a focus on providing vernacular content for its users. The app will have an entertainment section for train travellers with a lot of time to kill. They will be curating and aggregating the content from other platforms as well as making original content. Their first original web series, Zindagi Express, will be launched today on its Entertainment and News section.

Walmart May Introduce Myntra In US

After expanding to Canada, Flipkart-owned fashion etailer Myntra is now planning to sell its in-house brands across US Walmart stores. This development follows the online launch of the Myntra brands on Walmart Canada. Citing JP Suarez, executive vice president and chief administration officer of Walmart International, a Livemint report said that the company is also considering launching Myntra brands in Canadian Walmart stores in Q3. The company is exploring trade lanes with Myntra products.

Global System for Mobile Communications (GSMA), a trade body which represents the interests of mobile network operators worldwide, has predicted that India will contribute to about a quarter of the world’s new mobile subscribers by 2025, making it the second largest mobile market in the world. It estimated India to have around 920 Mn unique mobile subscribers by 2025 as compared to 750 Mn subscribers in 2018. Further, India is predicted to have 88 Mn 5G connections by 2025, which is around 7% of the country’s total telecom connections.

Encryption Does Not Allow Tracking Of Messages: WhatsApp

In the latest chapter in its tussle with the Indian government over tracing the origin of messages, WhatsApp has informed the Madras High Court that its end-to-end encryption software has been designed in a way that makes it impossible for the company to trace message sources, including for forwarded messages. According to a report by Bar & Bench, the submission was made by WhatsApp before the Bench of Justices S Manikumar and Subramonium Prasad in response to the ongoing case for keeping social media platform free from fake news and misinformation.

The Department for Promotion of Industry and Internal Trade (DPIIT), in its fact sheet for 2018-19 performance of FDI has shown that India received investments worth $44.36 Bn, a fall of 1% against $44.86 Bn in 2017-18. However, in rupee terms, the growth is 7%, with investments increasing from INR 288,889 Cr in 2017-18 to INR 309,867 Cr in 2018-19.The fluctuation is because of the conversion rate applied on the basis of monthly average rate provided by FEDAI (Foreign Exchange Dealers Association of India).

Digital payments company Paytm has claimed to reach a gross transaction value (GTV) of over $50 Bn, while clocking 5.5 Bn transactions in FY19. The Delhi NCR-based company attributed this growth to the rising adoption of Paytm across multiple use cases such as retail payments, fees, utility payments, travel booking, entertainment, games among others. Its recently launched subscription-based rewards program Paytm First also contributed to this growth along with increasing the customer retention.

Electronics Share Fall As Fashion And Grocery Sales Go Up

The e-tailing market is not shying away from betting big on the grocery and fashion domain as recent developments have shown. And there’s a good reason for that as groceries and apparel are outselling electronic goods. Management consulting firm RedSeer revealed in a new study that the share of sales of mobiles and electronics for ecommerce platforms has dropped to 38% in the first quarter (January-March) of 2019 from 45% in the same period last year. The decline has been steady in the past year.

Globally, India and China are leading the fintech adoption in the world. According to a new report by EY, the adoption of fintech rose to over 60%, of which the significant chunk was contributed by emerging markets such as India and China. The Global Fintech Adoption Index 2019 report said that both Asian countries have about 99.5% of consumers aware of money transfer and mobile payment platforms and standards. The adoption rate in both China and India stand at 87%, followed by Russia and South Africa at 82%.

Google has added three new features to Google Maps in India to make local transport more “relevant, accurate, and reliable”. These are part of Google’s yearlong effort to add localised features to Google Maps, which also include the bike mode as well as the Plus Codes for deliveries. Earlier, Google Maps had updated its voice navigation system in March to include six additional Indian languages: Bengali, Gujarati, Kannada, Telugu, Tamil and Malayalam.

Swedish online music streaming platform Spotify is testing a new ‘social listening’ feature which will allow friends to listen and collaborate on a live playlist from different devices. This means multiple people can add and listen to a shared playlist in real time. Users will be able to get access to a friend’s playlist with the help of a share link, or a scan code.

Google-owned video sharing platform YouTube has amended its policies to remove hateful and supremacist content from YouTube. The company also claimed that it has made changes to reduce borderline content and demonetise hateful content. The company claimed that it has been investing in policies, resources and products needed to protect the YouTube community from harmful content. Which has helped them in removing videos violating company policies faster than ever and users are seeing less borderline content and harmful misinformation.