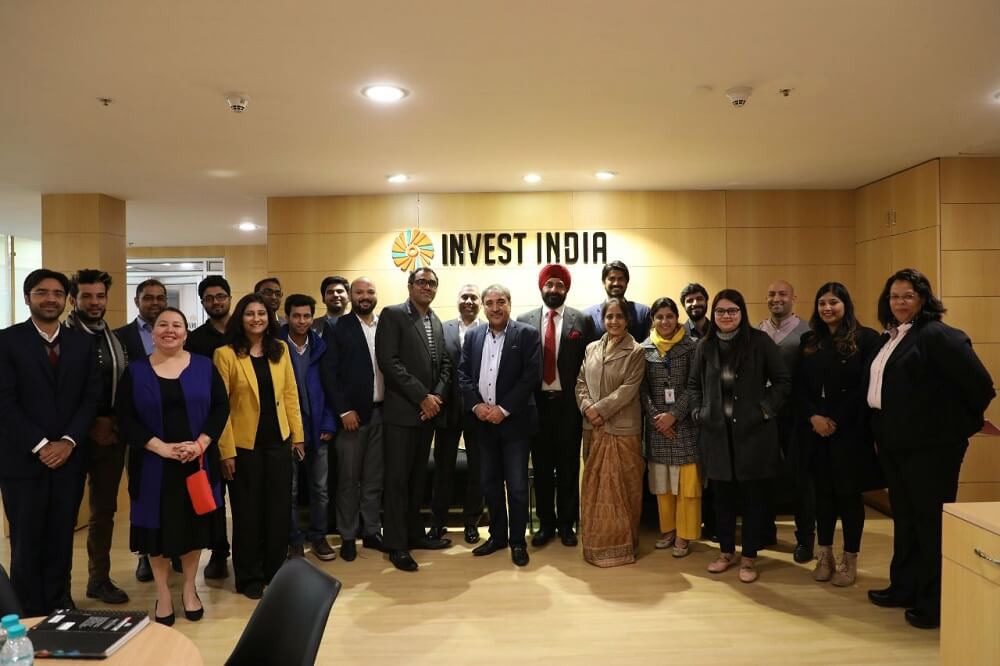 PoC or Proof of Concept has always been a difficult stage to attain funding at in the Indian startup ecosystem. In comparison to the western world, where even startups at the idea stage are known to have million dollars fundraises, the investor community is quite ‘risk-averse’ when it comes to Indian startups. With India being home to over 20K startups (of which around 5,000 to 5,200 are the tech startups), and the Indian government engaged in building a startup-friendly infrastructure, this certainly is a big hurdle for the Indian startup community.

Invest India, the national investment promotion and facilitation agency of India, conducted an elaborate round table conference last week to discuss such key concerns plaguing the growth of the Indian startup ecosystem currently.

Hosted at their Vigyan Bhawan office in New Delhi, the round table was joined by the management team of the Startup India programme, which is Invest India’s flagship programme under the Department of Industrial Policy and Promotion — as well as by many startup founders and budding entrepreneurs. The session was also attended by Dr. Pradeep Khosla, the eighth Chancellor of the University of California San Diego (UCSD).

The two-hour-long interaction between Dr. Pradeep Khosla and the founders of startups from various sectors was aimed at discussing vividly the startup ecosystem and its key concerns along with highlighting the upcoming technology trends in India.

The session depicted both positive and negative sentiments from the startup community end. For instance, Karan Anand, Senior Assistant Vice President of Invest India, seemed quite optimistic and stated that the startup scenario is looking up in India. According to him, angel networks have started picking up the pace and in the previous year alone, the government decided to give a boost to the startups in India. The policies for startup generation are already in place in 17 states with a lot of enthusiasm.

However, this was not a popular opinion amongst founders of the other startups present at the roundtable. As per Deep Bajaj, founder of PeeBuddy, “In India, the way you do the business is, ‘you build the product, make customers your first investors and if you are successful, then you have your story going’.” Evidently, as per Inc42 Data Labs H1 2017 and Q3 2017 report too, the early-stage funding has been at an all-time low in India as well.

The Stark Absence Of Indian Universities From The Startup Ecosystem

The discussion commenced with Dr. Pradeep Khosla’s pivotal question — how can universities in India create startups? He mentioned that the University of California San Diego (UCSD) attracts over $1 Bn for research funding in a year. Khosla has also been extremely instrumental in initiating and leading UC San Diego’s public phase of the  Campaign for UC San Diego — an ambitious and bold $2 Bn endeavor aimed at transforming the university.

The University has also been in news for receiving an endowment of $70 Mn from the India-based philanthropic organisation, Tata Trusts. Also, in countries like the US, universities are richly funded for their tech and biomedical research programmes. Despite institutions like SINE, IITB, IIMA, SE CEll, etc. that have acted as hyperactive incubators, helping many startups to find their grounds in the Indian market, a fertile pitch for the Indian startups are yet to be prepared and policies are far from being conducive.

Difficult To Get Funds At The PoC Level

Almost all the founders present in the session agreed that it is very difficult to get investors at the PoC level. The process in India is not to sell the idea but to develop the product and then sell it. If the product is scalable and is developed within time, then investors might pick it up. Bio-incubators developed by public sector holdings such as Biotechnology Industry Research Assistance Council (BIRAC) have been instrumental in strengthening biotech startups.

Akshay Verma, co-founder of FitPass also stated that the Indian startup ecosystem is flawed, with investors often making billion-dollar investments in a single startup. They end up empowering it too much, thus essentially eliminating any formidable competition.

Other concerns voiced during the conference pertained to the exit route available to founders. According to the speakers, the only way startup founders can exit a venture and start other projects is through acquisitions or IPOs. Acquisitions are much more common than IPOs and they happen most of the times when foreign companies are involved and are vying to enter India.

The group is also of the view that acquisitions are not serving the required purpose because they are majorly done in all stock deals. Therefore, they do not facilitate the influx of money into the ecosystem or give the acquired company’s founder a chance to start afresh. Verma was of the opinion that acquisitions are just used to retain talent, at times forcefully, which is probably not the correct way to entice talent into an organisation.

Lack of clarity on policy norms always played a hurdle in making, sustaining and procreating startups. These hurdles are even more imminent for the startups catering to the niche categories, for instance, in the biomedical industry.

Kavita Singh, founder, and director of Sakosh Biotech, further highlighted during the session that policies are still a long way off from implementation. She also said that a startup faces many problems, especially wherever clinical trials are involved. So, there is a good understanding of what needs to be done but there is a lack of implementable policies to realise those aspirations.

During the conference, the Invest India team also threw light upon the milestones achieved by the Indian startup ecosystem and the available opportunities for the budding entrepreneurs. 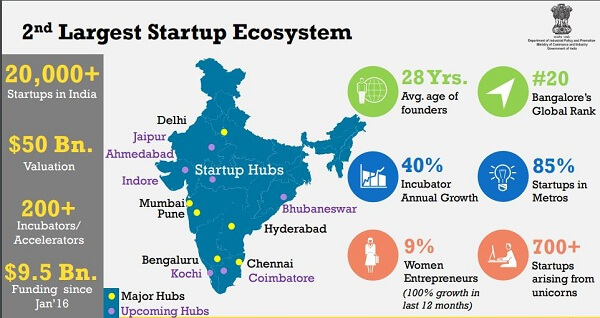 As showcased by the Invest India team in their presentation, India is home to over 20,000+ startups, with their combined valuation reaching $50 Bn. To support the early stage startups, there are 200+ incubators and accelerators and $9.5 Bn funding has been imparted since January 2016. 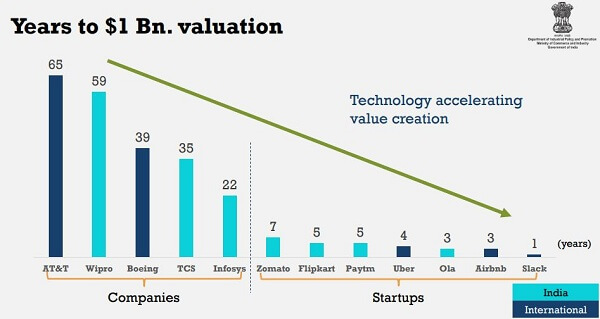 Twenty-eight is the average age of the founders and Bengaluru is the favourite hub for startups in India. There has been a 40% incubator growth annually. In India, as many as 1,300 startups are created every year but even then only 9% are founded/led by women entrepreneurs. Also, the concentration of tech startups lies in the metros and therefore, there lies a huge opportunity in the near future for the upcoming startups to create their base out of the untapped rural market there.

Not only this, with India getting an improved ranking in the charts of ease of doing business, low cost of doing business, proximity to customers/ vendors, a significant number of untapped niche areas, 7 Mn college graduates per year and 55% of the youth preferring to work in startups over corporates make India an attractive destination to startup. 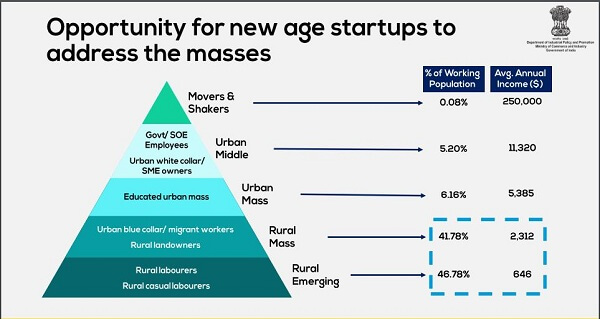 Prime Minister Modi’s move with the Startup India Initiative has marked the importance of propelling and sustaining the Indian startup ecosystem but there are still many more factors at play which are proving to be deterrents to the ecosystem.  Most of the startups would prefer to have a level of transparency with regards to government policies on bidding for tenders. They would also like policies to match the new age business setups.

Also, according to the labour ministry, nearly 1 Mn people enter the job market every month. So, India needs to prepare itself with the Herculean task of creating 1 Mn jobs every month. This cannot be possible unless the startups are given the leverage to rise and become self-sustainable, without depending upon the equity financing, particularly from the foreign investors. Keeping this in view, virtual incubators are coming up that can coach and mentor startups. But still, a lot has to be done.

The last two budgets have brought a much-required hope in the Indian startup ecosystem with an array of government initiatives, funds, tax benefits and more. But after three years of the plans in action and no major numbers in sight, the Indian startup community is a little perplexed. Also, very few startups have been able to gain funding under the government-backed schemes, which is posing questions over Indian government’s execution of the proposed plans and strategies. Thus, going ahead into another financial year, what steps the Indian government will take in order to formulate any plan of action to address the above-mentioned concerns of the Indian startup community, remains to be seen.