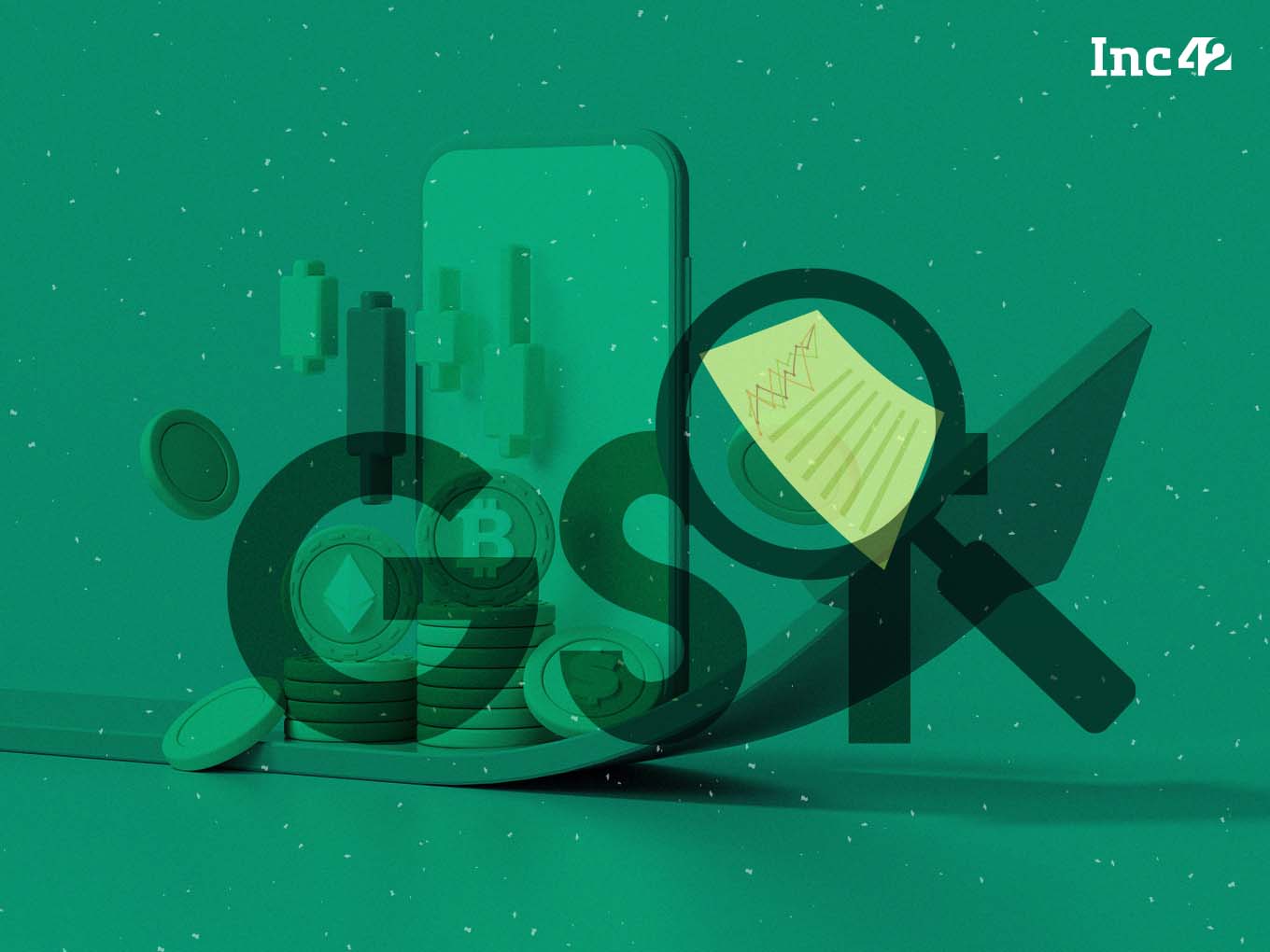 The government detected GST evasion to the tune of INR 81.54 Cr and made recoveries of INR 95.86 Cr

The largest GST evasion was detected at WazirX, where the government recovered INR 49.18 Cr

CoinDCX, CoinSwitch Kuber, and others feature on the list of 11 crypto exchanges accused of GST evasion

The Minister of State for finance, Pankaj Chaudhary, in response to a written question, told the Parliament that the central government has recovered a total of INR 95.86 Cr from 11 of India’s leading cryptocurrency exchanges. These crypto exchanges include the likes of CoinDCX and WazirX, among others.

The government had detected an evasion worth INR 81.54 Cr, Chaudhary added. The timeline for these investigations was not revealed in the response. According to MoS Finance, the government does not collect any data on the number of crypto exchanges in the country.

According to the list revealed by the government, the largest GST evasion was detected at WazirX parent Zanmai Labs Pvt. Ltd. The government detected an evasion to the tune of INR 40.51 Cr, recovering INR 49.18 Cr, which includes interests and penalties. 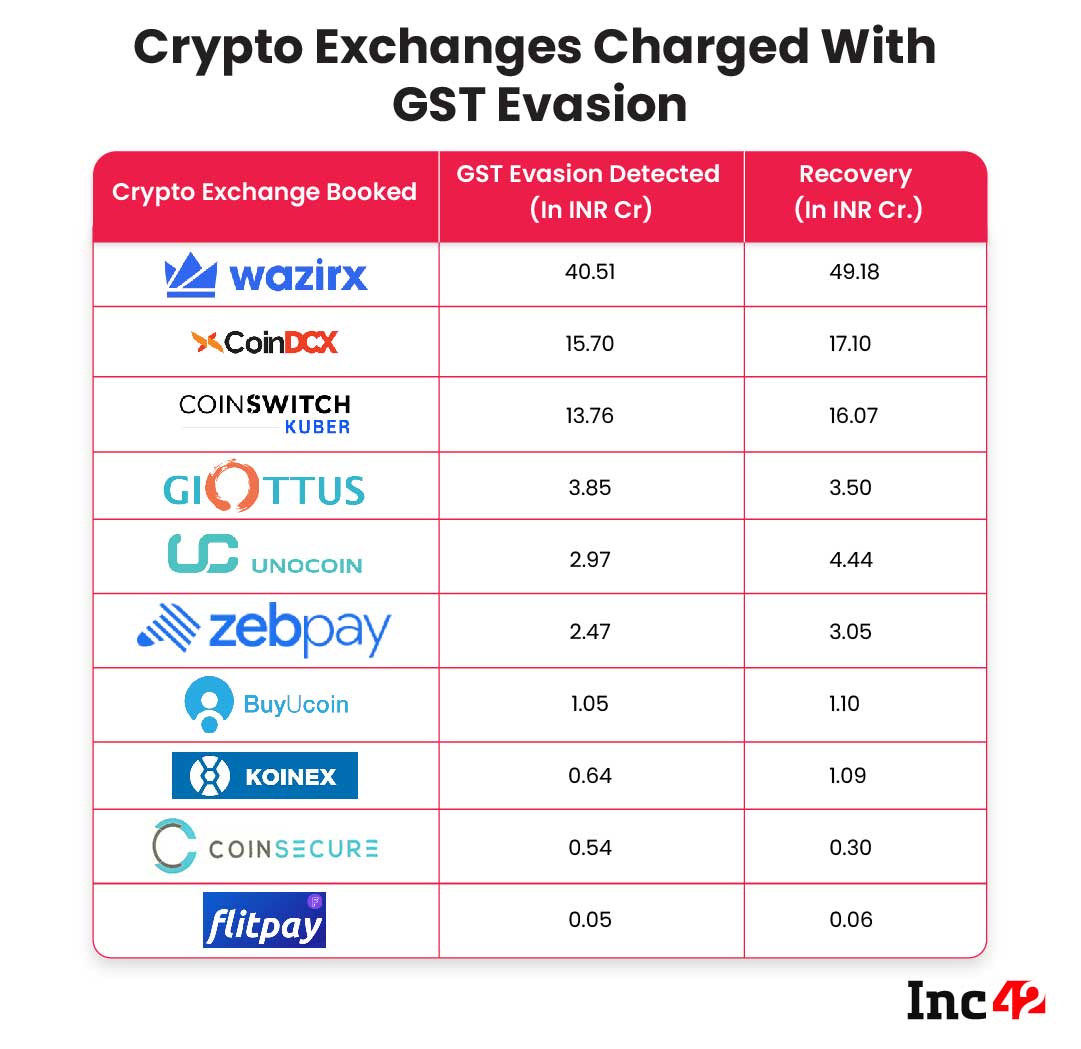 Back in December 2021, the Central Goods and Services Tax (CGST) department, under the Central Board of Indirect Taxes and Customs (CBIC) had detected GST evasion of 40.5 Cr at WazirX, on commission earned by the crypto exchange. As reported by Inc42, cash worth INR 49.20 Cr pertaining to GST evaded, interest and penalty were also recovered, the GST Mumbai Commissionerate said in a statement.

In response, a WazirX spokesperson told Inc42 that there was an ambiguity in interpreting one of the components, which led to a different calculation of GST paid. “However, we voluntarily paid additional GST in order to be cooperative and compliant. There was and is no intention to evade tax.”

Since then, the DGGI has been investigating all major crypto exchanges for GST evasion.

WazirX is followed by CoinDCX, India’s first crypto unicorn, which was charged with a GST evasion of INR 15.70 Cr, and the government made a recovery of INR 17.10 against the same, including interest and penalties. This comes in the backdrop of the crypto exchange considering an IPO at the moment.

CoinSwitch Kuber, India’s second crypto unicorn, is the third on the list, with an evasion detected to the tune of INR 13.76 Cr and recovery amounting to INR 16.07 Cr.

The Indian cryptocurrency market was ranked 11th out of 154 nations in terms of crypto adoption and 6th in terms of DeFi (Decentralised Finance) by Blockchain data platform Chainalysis. The crypto market in India has further grown from $923 Mn in April 2020 to a staggering $6.6 Bn in May 2021.

A recent report suggests that from June 2020 to July 2021, India’s crypto market grew by 641%. It added that large institutional-sized transfers above $10 Mn worth of cryptocurrency represent 42% of transactions sent from India-based addresses, suggesting that India’s cryptocurrency investors are part of larger, more sophisticated organisations.

The RBI is also set to launch its first digital currency trial programme, the Digital Rupee, by the end of the year, according to its governor Shaktikanta Das.