This step will definitely help the industry to introspect about the technology with respect to Indian climatic conditions and make necessary changes: Amitabh Shivpuri

Several industry players seem to have gladly accepted the government’s decision to halt the launch of new two-wheeler electric vehicle (EV) models. However, it remains to be seen how the decision affects the nascent EV industry in the country.

According to latest reports, the Union Road Transport Ministry has asked all two-wheeler EV manufacturers to not launch new models till the ongoing investigation in the multiple instances of EVs catching fire is completed.

The decision was communicated to the EV manufacturers during a meeting called by the ministry on Monday to discuss the fire incidents involving electric two-wheelers.

Sushant Kumar, founder and managing director of AMO Electric Bikes, called the decision “a cautious step” because the government is also targeting big to make the EV industry successful in India.

Kumar said that currently, no one knows why the reported fire mishaps took place as all the batteries were tested and approved by the government agencies. While the government’s decision might look like an obstacle to the industry’s growth for now, Kumar said he believes that such incidents can be avoided in the future once corrective actions are taken.

“Of course, there is some gap existing in the industry…” Kumar said. “I am sure that the EV industry can take care of it.”

He said that the government’s investigation is likely to focus on issues with battery standards or any failures in their manufacturing. Either or both of them can emerge as the reason for the fire incidents, and the industry needs to focus more on quality, he added.

Dr Prajwal Sabnis, cofounder of Orxa Energies, also said that while the government’s decision may affect some companies, it would lead to better quality products in the market.

Sabnis said he believes that engineering should be the strongest muscle in a company, adding, “Well-engineered products will generate a net-positive push for the ecosystem.”

In fact, the ministry has also cautioned the OEMs whose vehicles have not been involved in any fire incidents and asked them to take corrective measures for the sold vehicles.

Shivpuri also called the government’s decision a cautious one which will eventually help the industry grow stronger. There is surely something lacking here and nobody can overlook that, he said.

Since there are not many companies that have reported fire incidents, this is an opportunity for those companies to reanalyse their technologies, which would ultimately help them in the longer run, he added.

Earlier, the ministry had asked electric two-wheeler manufacturers to voluntarily recall an entire batch of vehicles even if one vehicle from the batch was involved in a fire incident.

Responding to Inc42’s query about vehicle recall, Okinawa said on April 28, “We are conducting proper vehicle and battery pack checkups through the extensive drive all across the country at our authorised dealerships. Customers are welcome to bring the scooters for an overall health checkup.” 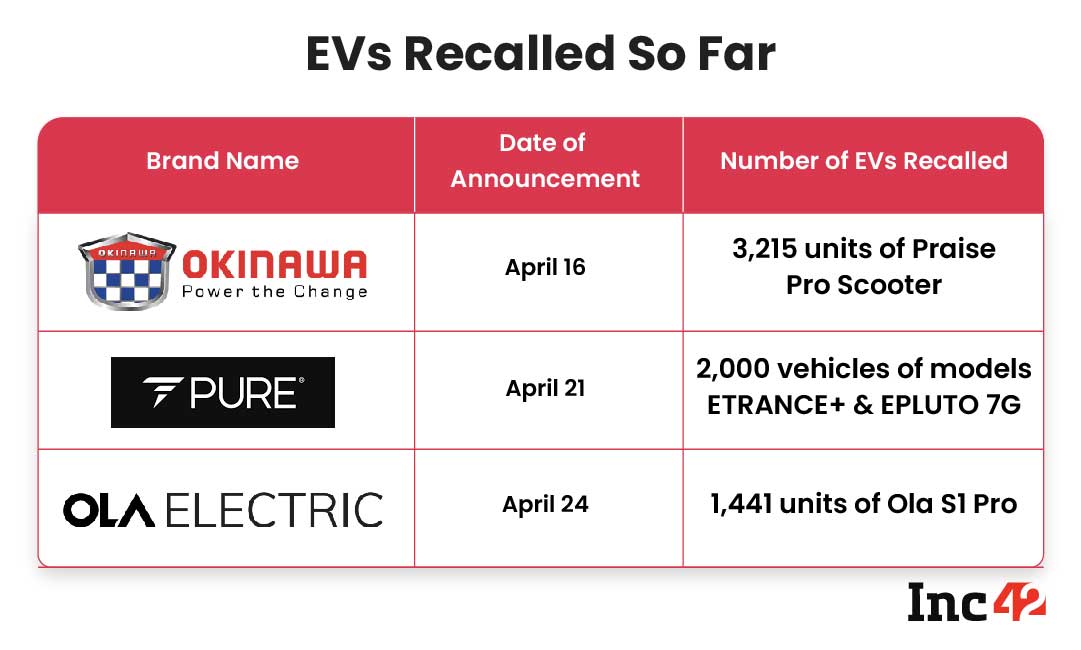 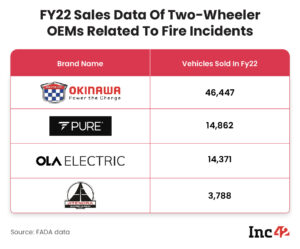 Even as the EV industry is facing criticism due to fire incidents and other reports of malfunctioning, the EV sales in the industry are on a rise. In FY22, EV sales witnessed over 3x growth.

According to the data provided by the Federation of Automobile Dealers Associations (FADA), 4,29,217 units of EVs were sold in FY22, compared to 1,34,821 in the previous financial year.