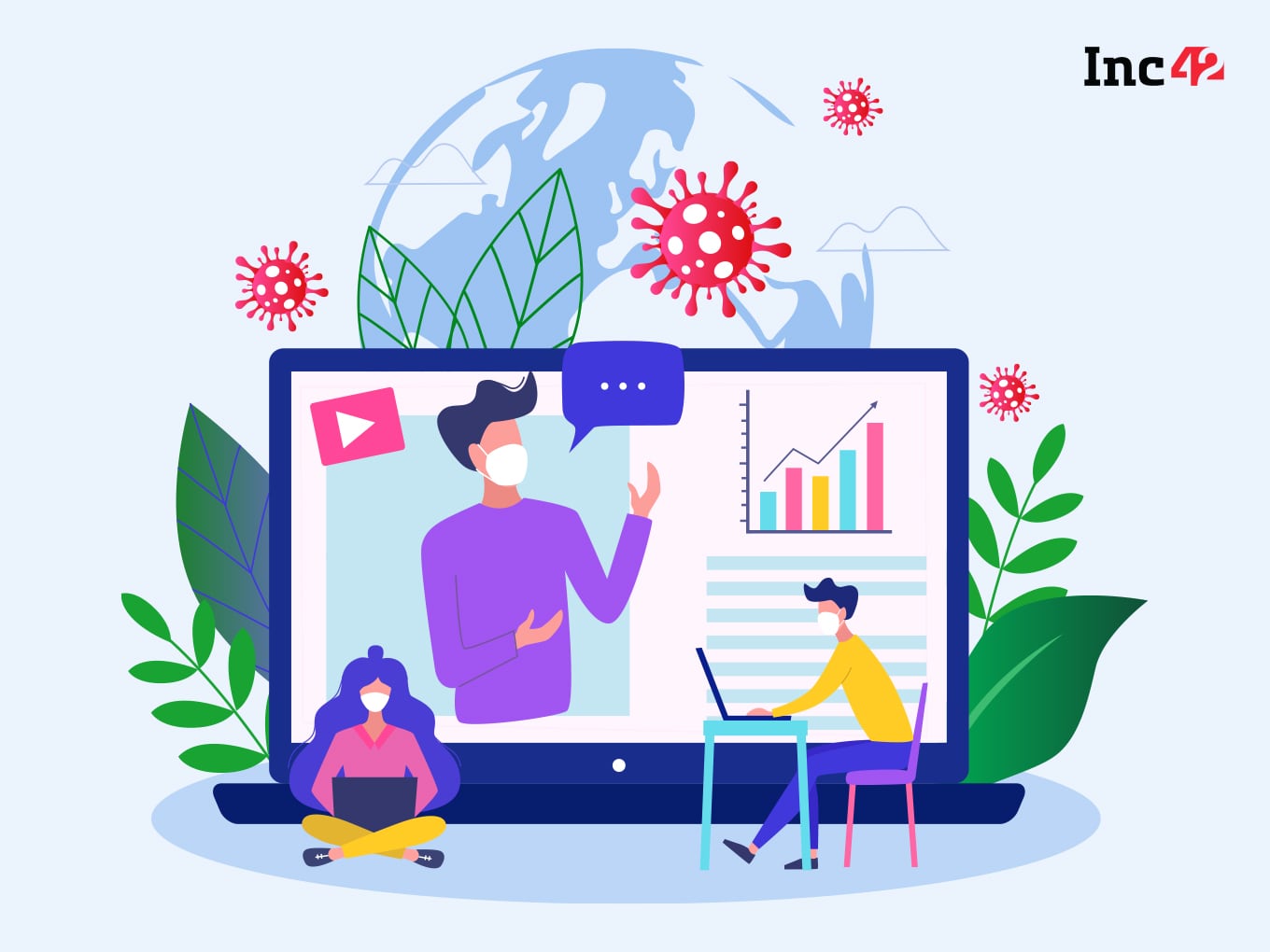 Indian education system might be one of the oldest in the world, but it is definitely not the most technologically advanced in the world. But this coronavirus outbreak has brought out a different side of learning and school education with the proliferation of edtech products and services. From local schools to colleges and universities, everyone is gunning for the new reality — online learning.

With almost 91% of the world’s student population out of school for the foreseeable future, many have said it’s time to take traditional education to another technologically advanced level. After all, for how long will the education of the students get affected by lockdowns, war, natural disasters and other such situations?

Mrinal Mohit, chief operating officer at BYJU’s, believes that learning from home has gained utmost importance more than ever before due to temporary school closure. “Students need a holistic and reliable solution that helps them continue learning from the comfort of their homes.”

Following China’s footsteps, Indian edtech startups and educational institutions have also emerged as leaders in ensuring that digital learning becomes a viable option for more students regardless of their capacity to afford online learning. In fact, edtech has ensured that education is one of the last things to get impacted by the pandemic. Whether it’s schools going online, or online classes going free, every stakeholder is doing their bit to keep the cycle of education running.

For Indian edtech startups, this means a sudden influx of online users, engagements and startups. It’s similar to what played out in the Indian market soon after demonetisation in 2016, when digital payments and the cashless economy got a major boost. Can India’s edtech startups capitalise on this momentary surge?

The Numbers Behind Edtech Growth

BYJU’s, which is one of the most valued edtech startups in the world, has noted a 150% surge with 6 Mn new students on the platform in March 2020. The company has noted the hike in both metro and non-metro regions.

Meanwhile, other edtech platforms have also been noting increase, especially after school started shutting down as a precautionary measure to tackle the coronavirus pandemic. Prime Minister Narendra Modi’s announcement for a 21-day-lockdown led to another spike in the users opting for online learning platforms.

For instance, upGrad claimed that it started noting an exponential growth in usage from February 24 to March 2, with almost 34% hike compared to the previous week. Then, in the first week of March, the company’s traction went up by 75%. Moreover, the enquiries on the platform have also increased by 50% from 2,500 to 3,800 per day. 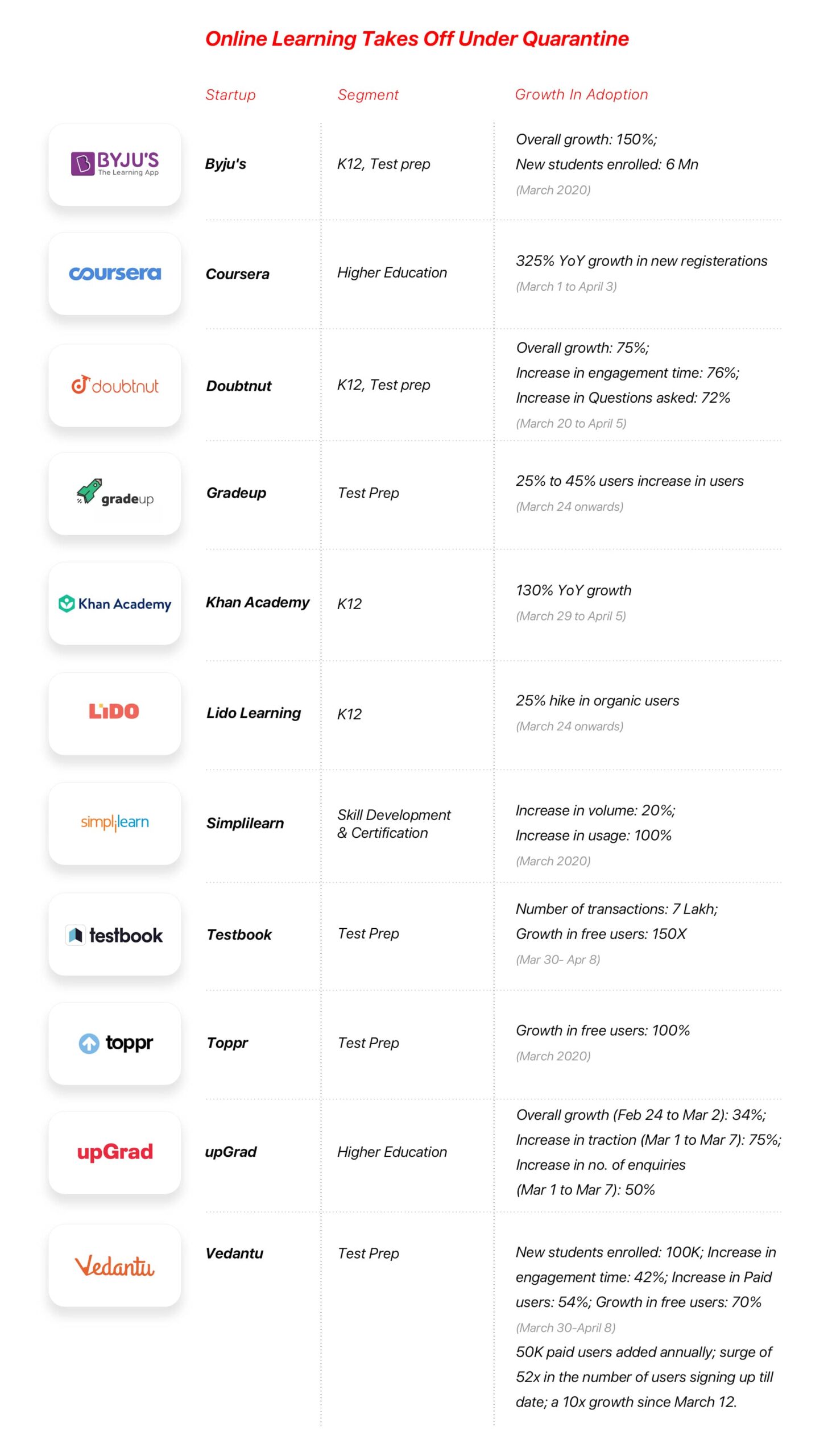 Meanwhile, test prep startup Testbook has noted seven lakh transactions in the last 10 days and over 150x free users in the same time period. Simplilearn has also highlighted that it has witnessed a 20% increase in terms of volume and a 100% hike in users on its android app. Whereas, Gradeup has noted an increase of 25% to 45% users, with JEE and NEET courses gaining high tractions. LidoLearning has also witnessed a 25% hike.

Monthly learning time on the platform in March increased by 50% YoY.  The company also noted that until last year, March was the month where the company would face a drop in usage due to term-end exams, boards and schools preparing for summer holidays.

Meanwhile, Vedantu highlighted that it adds over 50K paid users on its platform annually. However, the company has added 100K new users in just 10 days. Besides this, Vedantu is also noting a 42% user stickiness on the platform, compared to 54% of paid users.

The company also noted that there has been a high session attendance of 70% from the free users. Overall, the company has seen a surge of 52x in the number of users signing up till date, while it has noted a 10x growth since March 12.

Online open course platform Coursera, on the other hand, has noted a 325% YoY hike in new registration, 284% YoY in overall enrollment and 1747% hike in public health content in the last 30 days till April 3. Overall, the company has over 53 Mn registered learners worldwide, 2100 enterprise partnership and 4,100 active courses. In India, Coursera has 5.9 Mn registered learners.

K-12 learning startup Toppr has also noted a 100% growth in free user engagement in the last month. Meanwhile, growth in time spent on Toppr by students of senior classes (10-12) is double that of junior classes (6-9)

With the spike, several challenges have emerged for edtech giants despite the traction and growth.

To keep up with the demand, the company has been relying on its expert faculty of IIT graduates and doctors along with 200 subject expert content creators. Khan Academy too has been helping students better structure and plan their day with a focus on productivity. The company has designed special schedules for children of all ages and grades.

While better content is definitely going to be a big focal point, there are some operational hindrances that need to be addressed. For instance, Testbook had been struggling with the live lectures since its studio is out of reach, and onboarding new learners is also a big hurdle. There has been a drop in paid conversions as well as exams have been postponed. Whereas, processing EMI payments was the biggest task for Lido Learning, all because the EMI partners were unable to do an in-person verification.

“The current situation is certainly an opportunity for EdTech, it is somewhat similar to what demonetisation was for digital payments. We are witnessing an increase in digital consumption of educational services. A change is occurring in the student’s behaviour; there is a willingness to try and learn online,” said Shobhit Bhatnagar, CEO and cofounder of Gradeup.