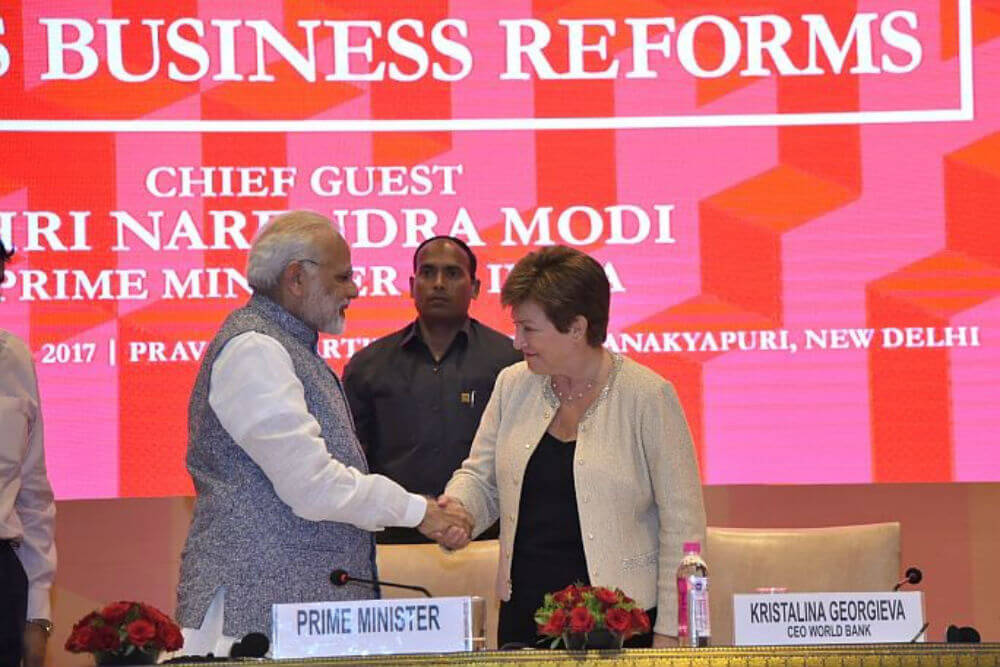 Thanking Kristalina Georgieva, current CEO of World Bank, he stated, “The World Bank has recognised the stupendous work done by us towards improving Ease of Doing Business. We are now among the top hundred countries in the Doing Business rankings. In a short time of three years we have improved forty-two ranks. I thank Kristalina Georgieva for being with us on this joyous occasion. It shows World Bank’s commitment to encourage nations to undertake reforms which benefit society and economy.”

He added that over the last three years, he has been constantly telling the domestic and foreign investor community that, “we in India are making sincere efforts to improve ease of doing business.” And this achievement is important because it is an indicator of good governance in the country; a measure of the quality of public policies and a benchmark of transparency of processes. Ultimately, it reflects the way people live, work and transact in a society.

The PM further pointed out that India’s ranking will improve further when the impact of the GST and all reforms are accounted for. He stated, “For example, this report has not taken into account the implementation of the Goods and Services Tax or GST. As you all know, GST is the biggest tax reform in the Indian economy. And it impacts many aspects of doing business. With GST, we are moving towards a modern tax regime, which is transparent, stable and predictable.”

He also touched upon the many policies undertaken by the government to boost job creation, one of them being positioning India as a startup nation and a global manufacturing hub. He said, “For this purpose, we have launched various initiatives, such as Make in India and Startup India. Through these initiatives, combined with the new eco-system of a formal economy and a unified tax regime, we are trying to create a new India.”

In addition he added that he is particularly keen to develop India into a knowledge-based, skill-supported and technology-driven society. He said, “I have often emphasised that technology must be used to transform governance. Use of technology should minimize physical interface and assist time bound decision-making. I am glad to see that a number of Government Departments and State Governments are deploying technology to improve governance and deliver services.”

Keeping this in mind, the government undertook an extensive exercise redesign laws and re-engineer the administrative processes to make business environment simpler and more conducive. PM Narendra Modi stated that an attempt has been made to align the Indian regulatory environment to international best practices. For instance, he pointed out that the government has abolished more than 1200 archaic laws and Acts which were only complicating governance.

While all in all, PM Narendra Modi’s initiatives have raised the bar for the Indian startup ecosystem globally and the recent positioning by World Bank in global top 100 countries in terms of ease of doing business is a sort of an endorsement for that. But it still remains to be seen how reforms like GST and rigorous exercises like demonetisation will actually help improve the India’s ranking as a business destination in the long term.