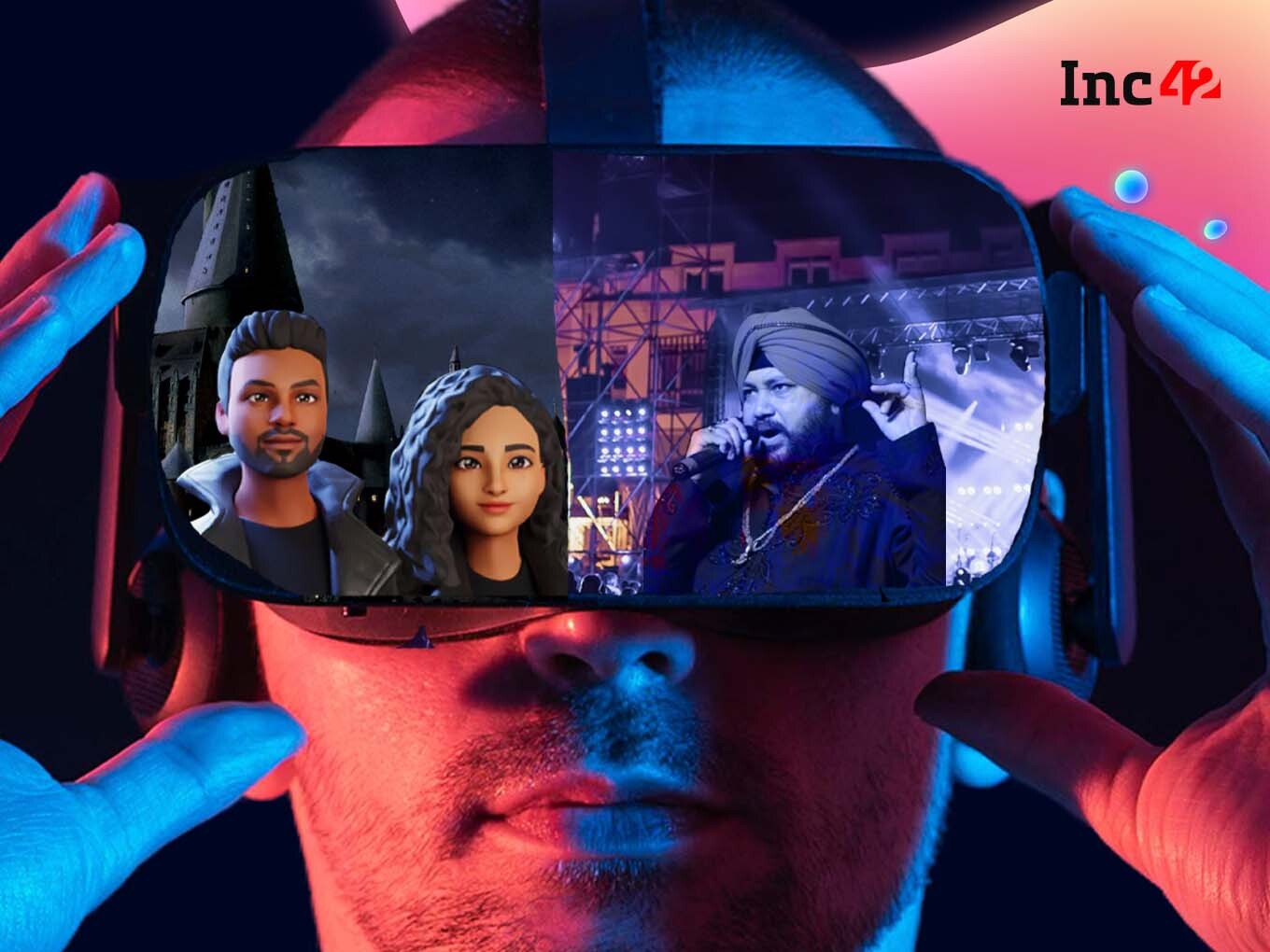 Daler Mehndi, famous for his hit track Tunak Tunak, is set to host a Republic Day concert on the PartyNite metaverse from Gamitronics

Dinesh S P and Janaganandhini Ramaswamy will get married to each other in the village of Sivalingapuram with a Harry Potter-themed wedding reception happening in the ‘TardiVerse’, on Polygon

What does a Daler Mehndi concert, a wedding in Tamil Nadu and the NBA team Brooklyn Nets have in common? You will soon be able to catch them all in the metaverse.

Facebook CEO Mark Zuckerberg made headlines earlier this year when he announced the rebranding of Facebook to Meta; marking a new direction for the company that is fully committing to a future where the internet will move out of our screens to occupy our very reality.

During its Q2 earnings call in July, 2021, Zuckerberg said, “In the coming years, I expect people will transition from seeing us primarily as a social media company to seeing us as a metaverse company.”

While the fever dream of a video announcement may seem like a public relations disaster that spawned endless memes and made the brand the butt of many jokes, Meta’s media team would probably be heaving a sigh of relief at the fact that it has diverted attention away from the massive scandal surrounding the internet giant.

A trove of leaked documents revealed, among many other things, that Facebook continuously and consistently failed to police hate speech and rhetoric on its platform, leading to the incitement of riots and violence against minorities across the world.

But Facebook isn’t rebranding itself to Meta only to shrug off the negative associations that a lot of us have with the social media giant; it is a taste of the lofty and dystopian ambition of the brand. Meta is not happy with controlling just how we communicate with each other; it wants to build a new world (Metaverse) for us to live in and control that.

But What Is The Metaverse?

“It’s a virtual environment where you can be present with people in digital spaces. You can kind of think about this as an embodied internet that you’re inside of rather than just looking at. We believe this is going to be the successor to the mobile internet,” said Zuckerberg.

The market size of the metaverse was $47.69 Bn in 2020, and it is poised to grow at a CAGR of 43.3% to reach $828 Bn by 2028. However, many believe if included the metaverse ETF too, the market size may touch trillion dollars or thereabouts by that time.

Within a short span, huge investments have poured into the metaverse projects, and the MAGMA (Meta, Apple, Google, Microsoft and Amazon) companies are working on it feverishly to capture the market.

Here in India, our compatriots have decided that they wouldn’t be outshone by their counterparts overseas, and have decided to build and contribute towards our own indigenous metaverses.

For example, Daler Mehndi, famous for his hit track Tunak Tunak, is set to host a Republic Day concert on the PartyNite metaverse from Gamitronics, a Hyderabad-based gaming studio, in what it claims will be the first truly-Indian metaverse concert.

On the 6th of February, Dinesh S P and Janaganandhini Ramaswamy will get married in the village of Sivalingapuram in Tamil Nadu. But a Harry Potter-themed wedding reception will be happening in the virtual world — on the “TardiVerse ” metaverse on Polygon.

Indian weddings have earned notoriety around the world for their unmatched extravagance and pomposity. Usually, the words ‘Indian wedding’ conjures up large clouds of friends and family decked up in their finest, loud music, flower arrangements and revelry. A Chennai couple have decided to go another way:

Dinesh SP, who is a project associate at the Indian Institute of Technology (IIT) Madras already had experience working on blockchain products and some interest in cryptocurrencies and web3 before he decided to host a Harry Potter-themed wedding reception on the metaverse with his fiancé Janaganandhini Ramaswamy, who is a potterhead (Harry Potter Fan).

This would make them the first couple in the nation to host a wedding reception in metaverse.

The wedding project will be executed by Vignesh Selvaraj’s startup TardiVerse whose metaverse is hosted on the Polygon blockchain.

“I feel so proud and blessed that I have seen and taken advantage of many great opportunities in this world before millions of people have seen them, the beginning of something big! India’s first #metaverse marriage in Polygon blockchain collaborated with TardiVerse Metaverse startup,” tweeted Dinesh.

“One fine day, I came across a video on Metaverse on YouTube. I thought why can’t we do an event in Metaverse? I know the future is big in Metaverse. Now, companies like Microsoft, Facebook and a lot more are investing in Metaverse. So I thought by conducting an event, everyone in India will know about the technology. We can work on a start-up and develop it,” Dinesh told Indian Express. Janaganandhini’s father had passed away last April, and Dinesh plans to have a 3D avatar of him bless them during the virtual event.

Once a ‘visitor’ logs into the platform, they can choose an avatar. Avatars for the couple, family members and friends have already been designed. There will be a live video stream of the wedding and guests can talk with each other.

Tunak Tunak Into The Metaverse With Daler Mehndi

The events and entertainment industry was hit hard by the pandemic and lockdowns, they never really bounced back to pre-pandemic levels. If industry stakeholders play their cards right, they could leverage metaverse technology to continue hosting events and concerts. India’s first metaverse concert is just days away.

Daler Mehndi will be hosting his own virtual concert on the metaverse that fans can attend using their PCs and mobile phones to access PartyNite, a metaverse being built by Hyderabad-based Gamitronics.

Select NFTs of Daler Mehndi’s work will also be dropped during the blockchain-powered metaverse event. The pre-alpha version of PartyNite is available as a 2GB game install that will be available for download in a little more than a week.

The metaverse will be focused on parties and celebrations which brands and celebrities can leverage to reach their audience directly on the platform.

If all of that is a bit vanilla — a bit of yesterday’s news for you — we might have another glimpse into the future thanks to the American basketball team Brooklyn Nets, who play in the National Basketball Association.

The Brooklyn Nets’ home arena, Barclays Center, has been equipped with over 100 high-resolution cameras surrounding the court that then output a video feed into Canon’s Free Viewpoint System that generates real-time images and models of every player on the court. This feed can then be accessed by NBA fans who want to view the game, allowing them to watch it from any angle or even while virtually walking on the court along with players as they are playing.

The Nets are the only professional sporting team in the United States who have installed the technology so far, but it isn’t a stretch to imagine others following through, wanting to offer a video game-like 360° virtual reality experience for their fans.

Once again, India is able to hold its own against those at the cutting edge of this technology across the world thanks to many homegrown startups working towards their implementation of metaverses. Earlier last year, Delhi-based blockchain startup OneRare, which is building a ‘food metaverse’ raised $2 Mn in seed funding from angel investors and investment funds. Last month, Metaverse and augmented reality builder platform Adloid had raised $4 Mn from Chiratae Ventures and Lenskart Vision Fund.