India Overtakes The US To Claim Second Spot In App Downloads in 2017: App Annie Report

India Overtakes The US To Claim Second Spot In App Downloads in 2017: App Annie Report

When It Came To Consumer Spend, Netflix and Tinder Gained Top Position In India As per the App Annie 2017 Retrospective Report, India overtook the US to take the second spot in terms of the number of app downloads in 2017. China took the first spot, with four of the top five countries by downloads being emerging markets. 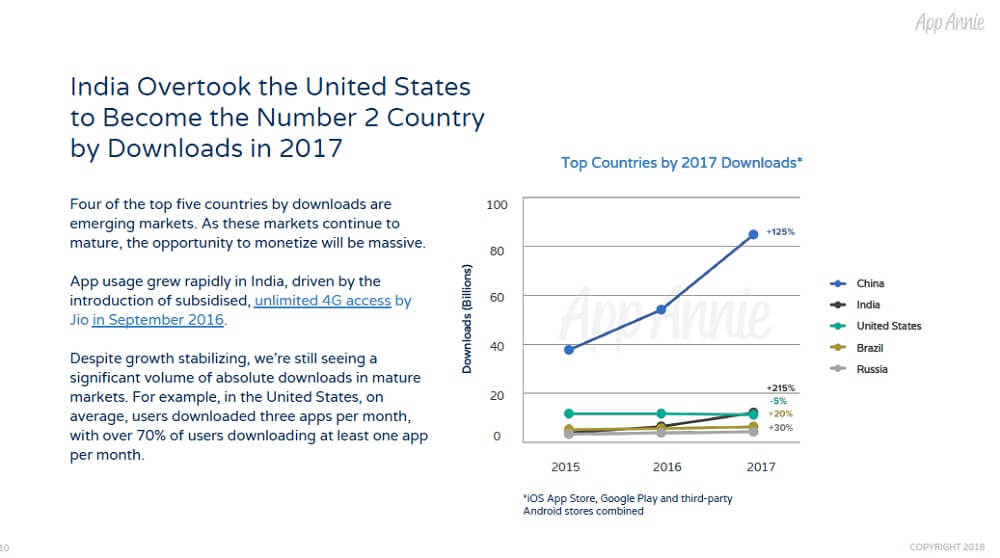 Meanwhile, globally there’s been a 60% growth in the number of app downloads with downloads exceeding 175 Bn. Consumer spending has more than doubled from 2015 and exceeded $86 Bn. Additionally, time spent in apps spiked by 30%, to the point where each user spends about 43 days per year in apps. The top markets by consumer spend have all posted a double-digit percentage growth during this time, with China in the lead (+270%), followed by the US (+75%), India (+60%), Brazil (+80%) and Russia (+35%). 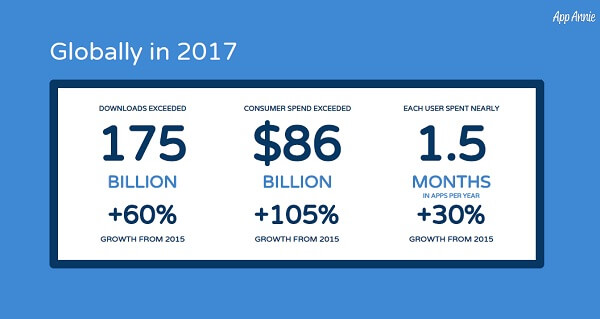 China meanwhile surpassed all other app markets in the world on every count. In Q4 2017, Chinese app users spent well over 200 Bn hours in apps across iOS, Google Play and third-party Android. In addition, $1 out of every $4 dollars clocked from the app stores, in-app ads and mobile commerce is generated by the Chinese market.

In India, on the other hand, users spent almost 50 Bn hours in apps during the same time frame. App usage grew rapidly in India, on account of the introduction of subsidised, unlimited 4G access  by Jio in September 2016. In most of the analysed markets, including India, the average smartphone user has more than 80 apps on their phone and uses close to 40 of them each month. 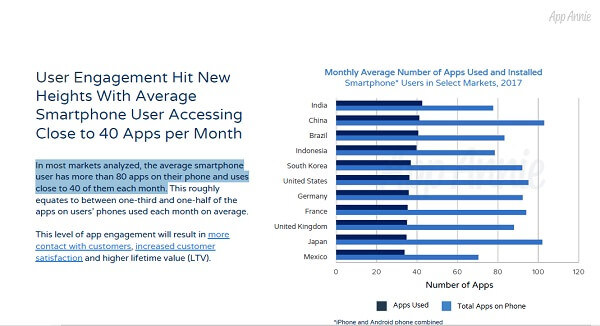 The report also mentions that with the increasing usage of finance apps, apps are creating cashless societies in emerging markets in Asia. In India, UPI, BHIM, Paytm, are boosting the growth of the market. It states that “Payment giant Paytm maintains a strong position in the market, with over 30% usage penetration among Android phone users in 2017.”

Interestingly, when it came to monthly active users (MAU), WhatsApp topped the list, with Facebook in the second spot. Paytm meanwhile clocked more MAUs than Instagram. Going by downloads, it was the other way around.  Facebook took the top spot with WhatsApp coming in at the second position. 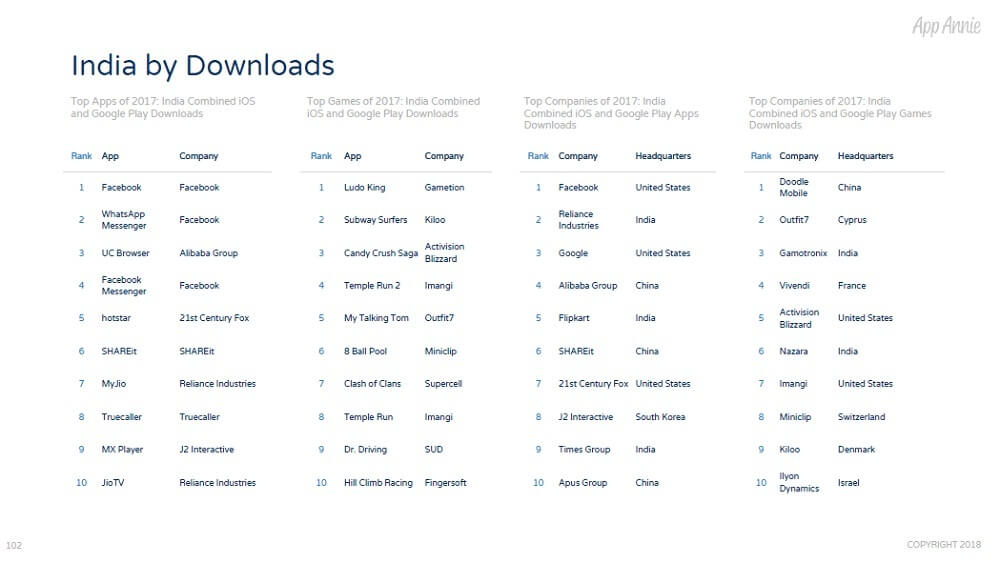 However when it came to consumer spending, video streaming app Netflix took the first spot with dating app Tinder coming on the second position. 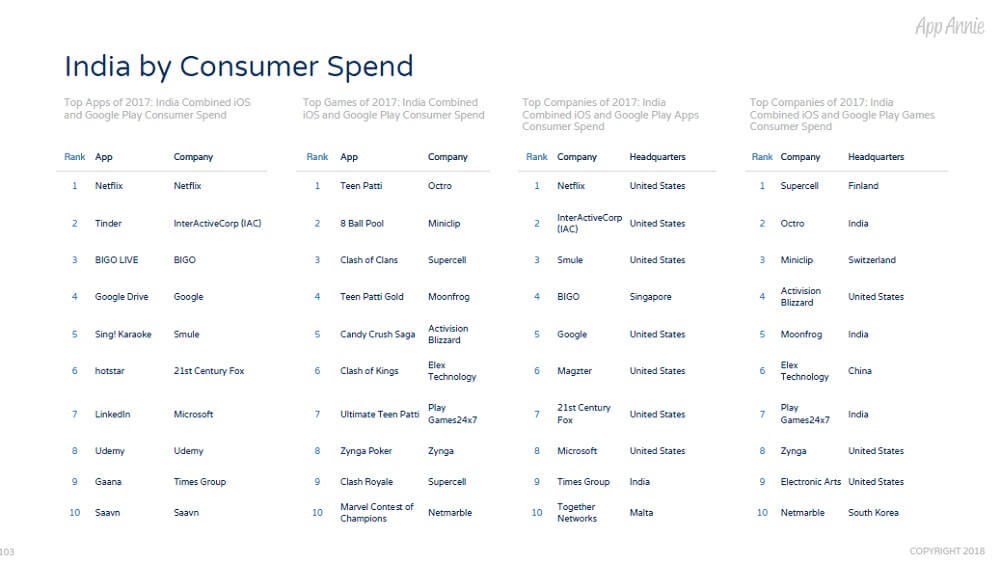 The App Annie report also point out that video consumption, especially via mobile data, increased by more than 6x since the first half of 2016 in India post the introduction of Jio. 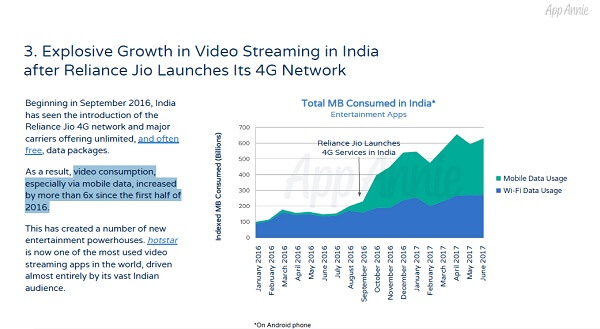 Meanwhile when it comes to social apps, in India alone, over 71 Bn hours were spent in the top five social apps on Android phone, with WhatsApp accounting for over 50% of those hours. 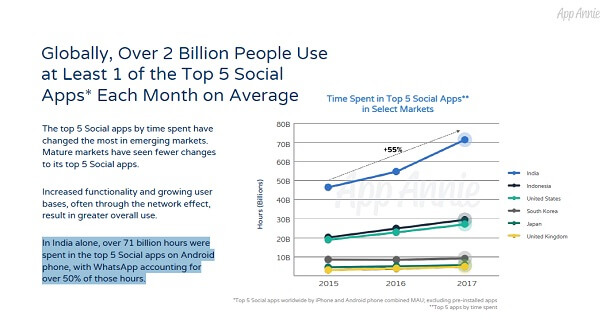 In conclusion, the Annie Report pointed out that while globally China dominated in downloads and revenues, India dominated in downloads globally as far as the Google Play store is concerned. By category, gaming, entertainment, photo and video, utilities, and social networking were the top five categories with shopping, finance, lifestyle, travel, and education following at the next five positions. 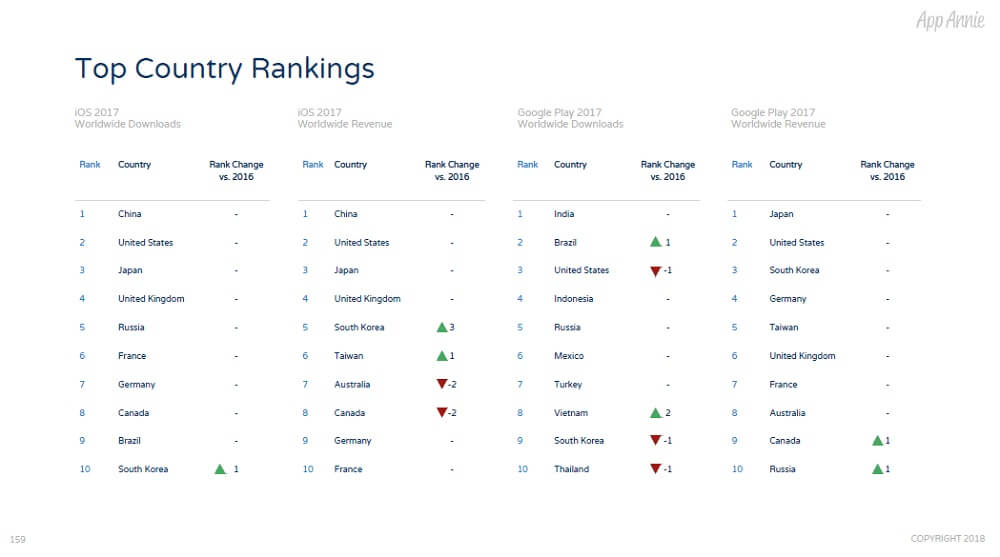