The experiment called ICMR’s Drone Response and Outreach in North East (i-Drone), started with Manipur’s plain land Bhishnupur to the Karang Island — covering a road distance of 23 Km in 15 minutes 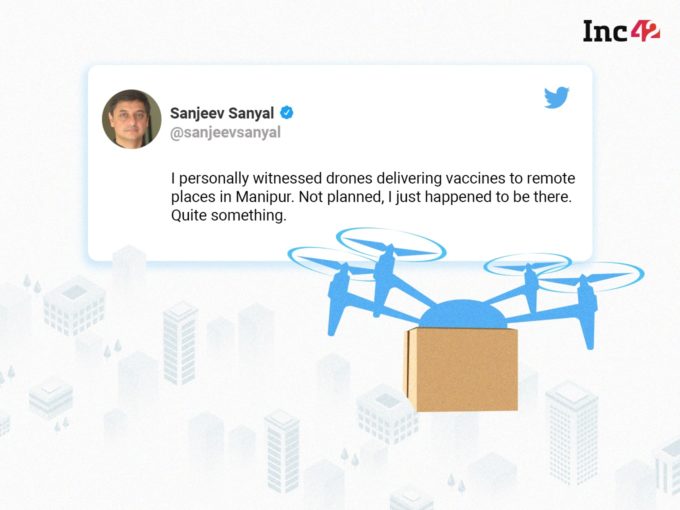 On August 25, 2021, the Ministry of Civil Aviation (MoCA) had notified the liberalised Drone Rules, 2021 to allow wider use of drones while balancing safety and security considerations in drone operations.

Less than a month later, the Indian Council of Medical Research (ICMR) was granted conditional exemption from the Drone Rules to use drones up to 3,000 metres [about 9,843 feet] in Andaman & Nicobar Islands, Manipur and Nagaland for conducting experimental — Beyond the Visual Line of Sight (BVLOS) vaccine delivery — especially for remote areas.

The move has made India the first nation in Southeast Asia to send vaccines in an unmanned aerial craft covering an aerial distance of 15 KM.

In a press statement, Mandaviya said, “Today, 10 beneficiaries will receive the first dose and 8 will receive the second dose at the PHC. This initiative will further help us achieve the highest possible immunization coverage for Covid-19. Incorporating such drone technologies into the national programs would help deliver other vaccines and medical supplies as quickly as possible.”

After spotting the experimental flight test in Manipur, India’s principal economic advisor Sanjeev Sanyal, took to Twitter to announce that he was an “accidental” witness to one of ICMR vaccine delivery via drone experiment, which he called — “Quite something”. 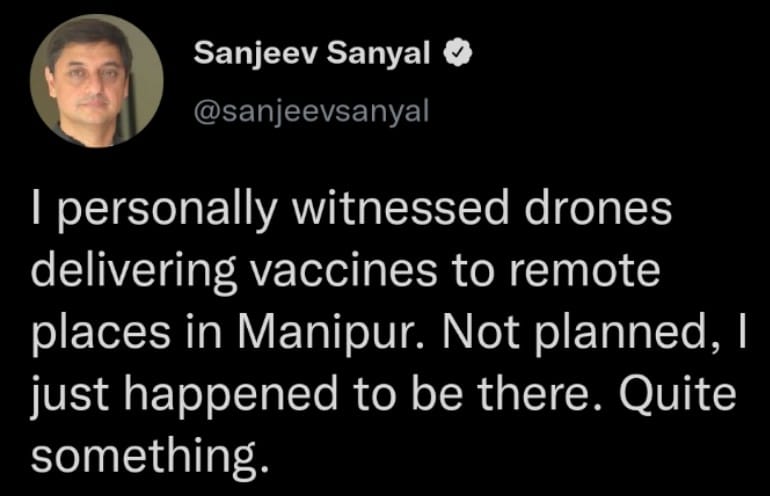 In April 2021, the Telangana government also received permission to use drones within the visual line of sight (VLOS) for the experimental delivery of Covid vaccines. The state government, in partnership with the World Economic Forum, tied up with hyperlocal delivery app Dunzo to pilot drone-based deliveries of medicines in the state for 6 days — September 20 to 25.

Answering a question on the use of drones and the administration of the vaccine sent via it, Sanyal said that many locations have a local compounder or health worker who is trained to administer the vaccine and the drones only work for areas where a local administrator is available. “For other remote places, someone will have to be sent,” he added.

While a lot of planning, training and resources go into vaccine deliveries via drones, the unavailability of a health worker to administer the vaccine is a setback to such an experiment.

Meanwhile, drones have been effectively proven helpful during medicine delivery, sanitisation etc., amid the Covid-19 pandemic.

The Market For Drone In India

According to the Inc42 Plus report titled Drone Technology India Opportunity report 2019, drone startups had only a 2.26% share among the deeptech investments between 2014 and 2018. However, as of 2019, drone startups raised a total funding of $16.55 Mn, which is a significant rise.

The number of Indian drone startups too crossed 50 as the market was introduced to some key players such as Cron Technology, Detect Systems, Drones Tech Lab etc. Several Indian startups such as SenseHawk, TechEagle, Ideaforge, among others have been offering drone solutions to increase better efficiency in various sectors.