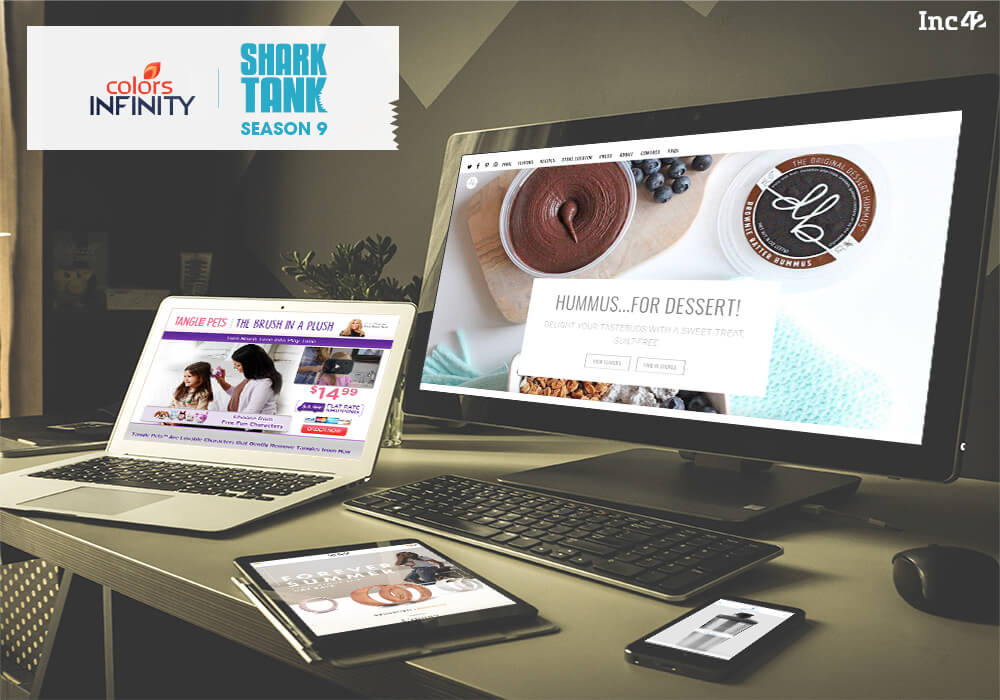 The world of startups is full of excitement and ambition with entrepreneurs racing against time to chase crazy targets, innovating new products and technology, working on prototypes to show investors, all in a bid to make their ideas a reality. It is a lot of hard work as well, but the passion to create something of one’s own makes it well worth the effort.

The startup action from the real world becomes double the fun when a business pitch meets a reality TV show of the likes of Shark Tank, where aspiring or existing entrepreneurs pitch their business ideas to “Sharks” (investors) in the “tank”. The series always offers some edge-of-the-seat drama and interesting products to look out for in the future.

Inc42, in a partnership with Colors Infinity, is bringing you all the action on Season-9 of business reality show Shark Tank, which is currently running. This time, check out episodes 3,4, and 5 with people pitching their business ideas — from silicon rings to hummus dessert — to celebrity guest Sharks like Mark Cuban, Sir Richard Branson, Lori Greiner, Bethenny Frankel, Alex Rodriguez, and more.

Here’s a quick look at all the action from the last three episodes:

There are some products which when spotted for the first time, evoke an “I always needed this” response from customers. Enso Rings is one such product.

Brighton Jones and Aaron Dalley, demonstrated how finger rings and wedding bands made of metal can cause allergic reactions or be harmful for one’s skin, and that there are indeed statistics to back this claim.

They exhibited how Enso Rings, which are made of silicone, are a safer option, but their positioning looked confusing as they also thought of the product as a fashion statement. They were pitching for $500k at a 7.5% stake. Mark Cuban did not want to invest in a product that plays on fears and Barbara Corcoran pulled out citing competition and no clear message or branding.

Robert Herjavec really loved the sales and margins the business offered and made an offer for a 5% additional stake than what was offered. Kevin O’Leary countered that with a complicated debt-equity deal that would result in the founders making more money, in the long run, assuming the business was successful.

In the end, it was Robert who stole the deal by betting on the numbers. This went on to show that numbers don’t lie even if the product or the idea is not understood by everyone.

Liz Martin, a mom to three, went through the nightmare of brushing her daughter’s tangled hair with bad quality and boring-looking brushes. That’s what gave a kick start to Tangle Pets, a company offering good-quality brushes with cute plushies on top. A double incentive for kids to get their hair untangled.

Liz was pitching for $75k for an offering of 35% stake in Tangle Pets. Mark and Barbara were put off by Liz’s over-the-top presentation and not interested as the company did not have impressive business numbers. Kevin saw it as any other brush and Robert bowed out as well. It was down to Liz’s best chance, the queen of QVC — Lori Greiner — who could really put this product out there in front of millions of moms who follow her.

Luckily for Liz, she liked the product for its quality and made an offer for a 50% partnership in the business. Liz offered a weak counter, but everyone in the tank knew Lori was her best chance to make Tangle Pets a success. She accepted the offer and everyone was back to celebrations and confetti. 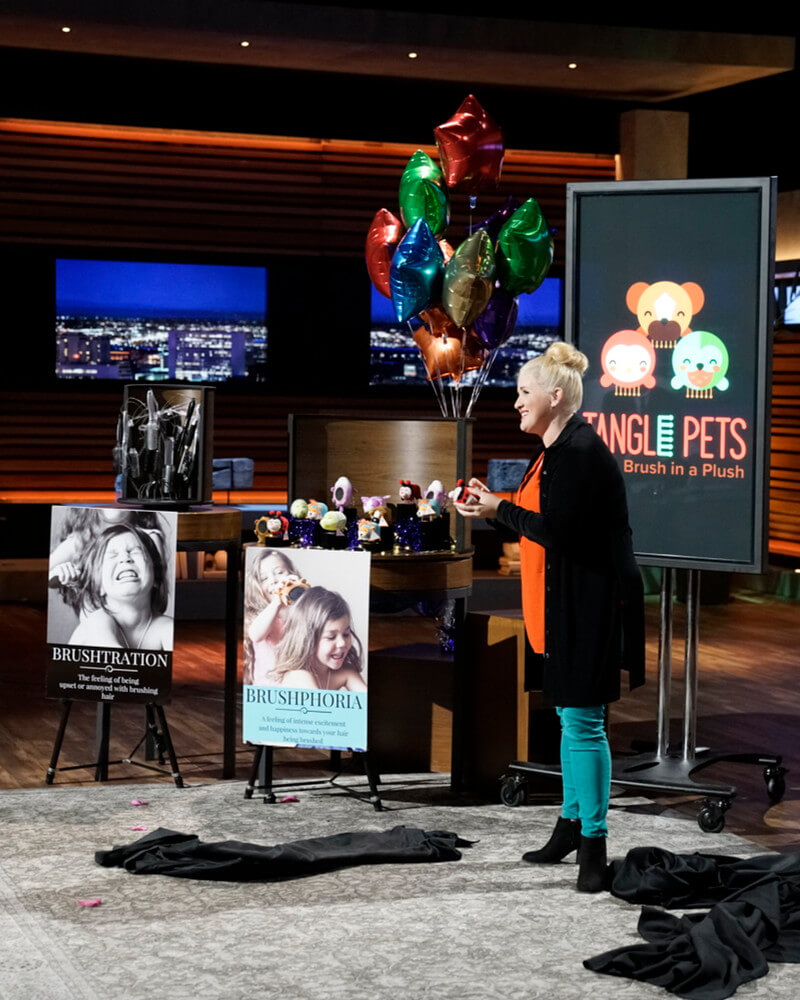 Who does not have a sweet tooth? And who does not feel the guilty pangs after indulging in sinful treats? So, the target customer for a healthy dessert is pretty much everyone. How about hummus for dessert?

Well, that’s exactly what Makenzie Marzluff has come up with. Makenzie pitched for her company — Delighted by Hummus — asking for a $600k investment at a 12% stake.

Makenzie came up with the idea of hummus as a dessert while preparing a dip for a super bowl party, and since then, she has converted the idea into a fledgeling company, hitting a million dollars in the first year’s sales.

The Sharks were impressed with her story of driving a van full of hummus boxes to stores in seven states all by herself. Kevin, the go-to loan Shark made a debt offer, but Mackenzie accepted Mark’s money at half the company’s valuation. Mark was confident that this business could have a big retail play even though the other Sharks disagreed.

Chris Gronkowski, who belongs to the famous Gronkowski family known for athletes in NFL and Baseball, has designed the ultimate protein shaker which keeps the drink cool for a long time and does not have any leakages. He brought all four of his brothers to the pitch and challenged the sharks to a game of flip cup.

The Gronks won it easy and Chris showed the bad quality shakers that were available in the market. Barbara pointed out that the ice shaker’s branding would have to milk the Gronkowski brand name and all the Sharks seemed to agree.

Chris was pitching for $100k at a 10% stake. In one of the rarest moments of the tank, Chris had an offer from all of the Sharks and, in the end, took up a combined bid from Mark and Alex Rodriguez, both of whom have some great connections in the major leagues and the sports industry. 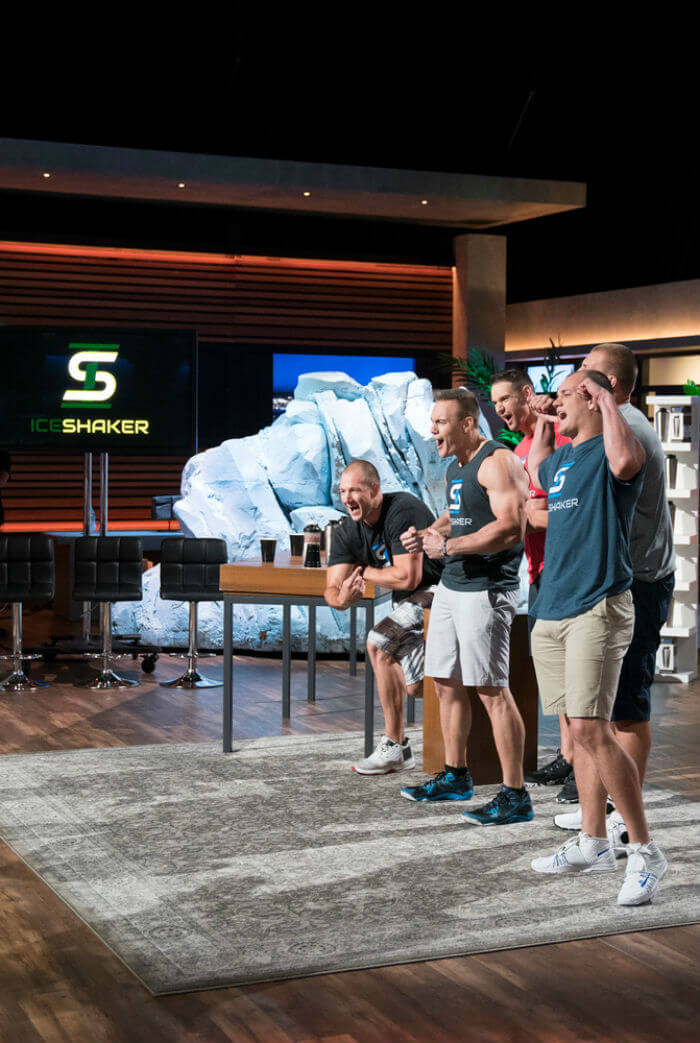 We’ve all heard about short girl problems, but not enough has been said about the short men problem. Yes, that’s indeed a thing. Well, Steven Mazur & Eric Huang’s Ash & Erie, formerly known as Ash & Anvil, seems to have finally found a solution.

On Shark Tank earlier this week, Steven and Eric entered the tank wearing ill-fitted shirts to highlight the problem that they were trying to solve — that of shorter guys not finding shirts that fit right. They highlighted the fact that there are brands for petite and plus-sized women and also for really tall men, but when it comes to shorter men, which is one in three Americans, there is nothing out there.

In the short span of time that they’ve been in business, the two have managed decent sales and that impressed the Sharks. The price points of the products were sharp too, offering decent margins to work with. The duo pitched for $100k against a 12.5% stake.

John and Robert ended up squabbling about their respective heights, but in the end, it was the tallest man of them all, Mark, who made an offer but asked for a much larger stake. Kevin, too, made an offer, but by then Steven had jumped on Mark’s offer for more money in the kitty and the deal was sealed.

Whenever there is a good old photo booth at any wedding or an event, there’s bound to be a queue of people wanting to get clicked. And no one is ever happy with their pictures. Worry no more as Mirmir is here. Mirmir is a device that has a single filter which makes everyone look good.

Sean Spencer and Ryan Glenn from Mirmir entered the tank, pitching for a $350K investment at a 10% stake. The company has done some impressive business this far and is profitable. They now need cash to make more machines and really press the pedal of hyper-growth.

The sharks were quick to try out the filter and get some photos clicked. Mark was concerned about the competition and the lack of proprietary assets while John thought it’s a market that changes too fast.

Interestingly, Robert had been a customer earlier and was delighted with the experience. Since the company is already profitable, Kevin offered a line of credit equal to the amount asked for in return for a 5% equity but it was Robert who got everyone’s attention. He wanted to acquire 50% in Mirmir, which the founders didn’t seem ready to part with. It was a big vote of confidence, and in the end, they settled for a sale of 20% for double the amount asked for.

Between the short men’s shirts and Liz’s OTT show of her kiddie brush, these episodes made for an exciting watch. Watch this space as we bring you more from all that is brewing in Shark Tank Season 9!