How To Build A Startup Team – Lessons From Team StayUncle

How To Build A Startup Team – Lessons From Team StayUncle

It was November. For once I was truly enjoying going out and rejoicing the pleasant warmth of the Delhi sun. It came welcoming after spending a month of travel in holy Tibet.

I’d launched a crowd funding campaign and raised around 1 Lakh rupee for the most ultimate journey of my life which I combined with all of the savings I had in my past 3 years of work, volunteering and writing in India.

I’ve never told my parents that I was running out of money, not at that time not ever. I didn’t even tell them that I was on the brink of suicide 2 years ago, they’ve found out from here.

I came back from Tibet with incredible 3.700 Rupees left. I guess that was it. I was planning to visit few more places in India, pay obeisance to the sea gods and then take my flight sometimes at the beginning of December.

After 3 years, I knew I was going to be a complete failure in the eyes of my parents and relatives – their boy being 3 years abroad and returning back broke. However, I felt super happy and illuminated. India and Tibet had me transformed forever. The manuscript of my first book was ready as well.

Just few days before my last Indian pilgrimage, I decided to visit a Social Media Workshop in Delhi and upgrade myself with the latest in Social Media Marketing.

A curly guy of my age wearing funny beard approached me and introduced himself.

That was him. Sanchit Sethi.

A mechanical engineer from BITS Pilani. I had no idea what that means at that time.

He spoke a brief about his history and then started talking about an idea he was working on.

The only thing he had at that time was a Landing page for launching updates and the name of the initiative.

As an avid traveller Sanchit wanted to change the fact that others like him who travelled often had to pay for hotel for 24 hours even for having to stay for few hours.

He was pained by that and by the fact that the standard rigid 12 noon check out time forced people to plan their entire business day and meetings according to that timing.

Little did I know that he wanted to change far more than that.

What particularly impressed me was the fact that he already had partnership with few hotels and has made over 50 bookings in the past 2 months.

A true Lean practitioner. I liked that.

We had few more meetings over launch after that.

With few thousands rupees left in my pocket I’ve decided to become a co-founder in this Indian vala’s startup. This was going to be good.

Until it became bad. The very next day I told Sanchit that he too was dealing with savvy but eccentric traveller who because of that was running out of money to buy his own food, not to mention running a company. Hence I’d require a survival salary or I am as good as nothing.

I didn’t dare to ask more at that time. I already knew his scenario. He had his job left earlier in 2014 and was working in Network Marketing with Amway to manage his cash flow. He was supposed to pay my salary from that amount too.

“A startup is a full time commitment” – he always says

I had to agree and I knew now that he’ll have tough times paying salary to me.

To make things bit better I’ve decided to move to his flat at MG Road Gurgaon. His room was our bedroom, our working room, our dining room and our prayer room at the same time.

He had one bed which I started occupying. For the next 3 months he had decided to sacrifice his own comfort on the account of the comfort of his firangi cofounder. I watched him sleeping on the ground and praying every evening late at night in the dark in front of his little deities inside the almirah.

Almost every day he used to feed me with the malai from the boiling milk so that I can add some kilo to my bones and my protruding eyes. Not to mention that I finished his huge box of ladoos intended as offering to Lord Ganesha.

Those were the days I started truly understanding what it means to be an Indian, so inherent to the Indian heart and soul. I was witnessing the image of sacrifice every single day. I thought my book of India was completed. No. It has just started unravelling. I was now inside the heart of India.

We’ve launched our website and started building a community around the idea of StayUncle. However our money was running low. We’ve taken photos of us one day counting coins thrown under the bed and on the table to go and eat some roti sabzi. His roommate from the other room was kind enough to borrow us some cash. Kudos to the guy. 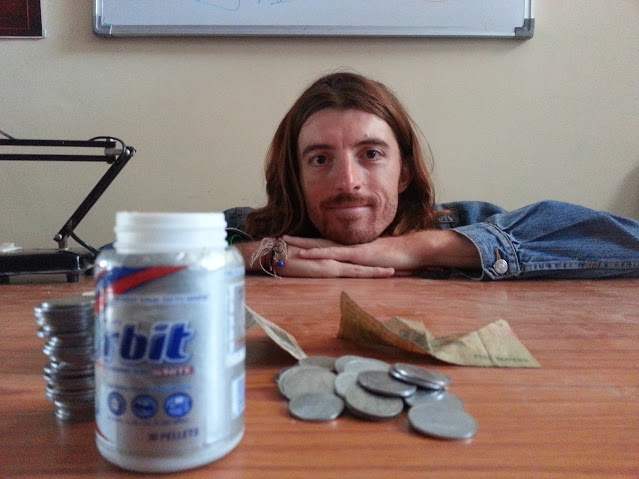 When you run out of money, the worse of your demons start surfacing and focus becomes more difficult. We were out of cash and looking out for options. That face above shows only half of the desperation.

Then one day I started a very unusual conversation with Sanchit. I had this insight that most Indian parents, no matter how tough their finances are, they’d always have secret fund for their children’s marriage. An Indian marriage has to be lush even if it means saving Rupee after Rupee for decades and decades.

Sanchit I do not mean to comment too much on something which has always been part of the culture in this land. But do you mean that it makes sense that an Indian family should stretch itself that far for the sake of marriage ceremony? If you had the option of saving money all your life and use it to open up your dream business, scale it, hire many hundreds people and improve the life of so many families or using those money to prepare a wedding for your son where people will come, eat till their throats, fart all night and then leave in order to gossip the next day how did this guy or that girl looked like, what would you chose?

Before even waiting for his response I exploded with emotions

I don’t know about you but I know that If I knew that my father had few Lakhs stashed under some rock and he was saving them for some wedding ceremony of mine just because he is pressured by the society instead of handing those money to me so that I can work on my dreams and make a difference, I know that I’d burn the house and him alive.

Sanchit busted out laughing but didn’t say anything.

The next day he shot:

Uncle ji, get ready. We are going to my native place to court our first investors.

You mean a train travel to Varanasi full of funny trans-genders and a homemade food? Awesome!!

This was going to be good. And it was good. I was the first firangi his family and the people of the small Jaunpur had ever seen.

We seated them the next evening after relishing awesome dinner and explained them what are working on, how serious we are.

Mission successful. Sanchit was in his Super Sayan mode, very persuading and charming. He had managed to disarm his father and to get a handshake from him. The firangi effect also worked itself out. My speaking of basic Hindi completely captivated papa ji. Sanchit knew exactly what he was doing.

We came back triumphant. However the secret marriage fund never worked itself out so far. Around a month after the visit, we have started conversation with our first investor, our Big Daddy, Ajay Naqvi and obtained his verbal agreement. Sanchit was still getting delayed payments of few thousands rupee from his Network Marketing business and I was writing an article here and there.

Those days of living near the havoc, those morning juice wala sessions, were our unique moments of bonding of hearts. The old adage of India proved itself true – India is a country of hearts. 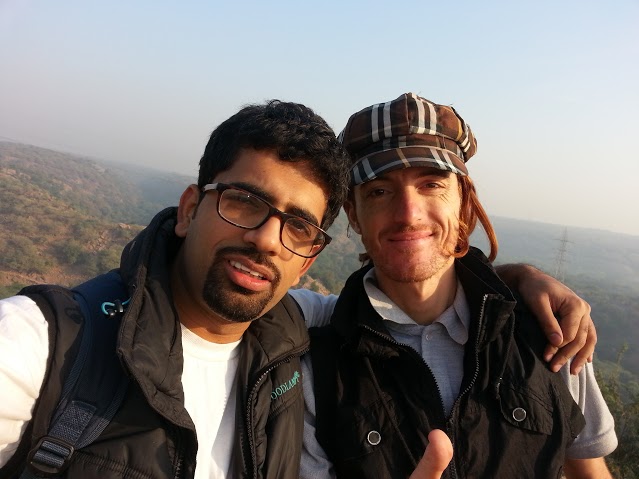 However, the highest moment for me followed in March, when I got to know that Sanchit ‘s rent was 2 months due. He wasn’t paying his rent at all because of the salary he was paying to me.

I had no idea about it. The idiot never told me.

At that moment I understood what it means to form a startup team.

Your co-founder should be able to do the same thing for you what Sanchit did for me. Before I joined, Sanchit was the bearer of the StayUncle idea for almost 1 year. Struggling alone, distributing pamphlets on the railway station in the nights after his office hours, being chased by the police. And now, paying his co-founder a salary. That’s why he is the main risk taker. That’s why he holds the majority of the company’s shares. Make sure that you have a Sanchit in your team, the prime risk taker who will hold the torch no matter what.

Before you become co-founders, become brothers. Living together in poverty has made all the difference for us. Sharing the food from the same plate. The tears that sometimes rolled on my face secretly when I was seeing him sleeping on the floor like an image of this motherland lying low yet strong and serene for centuries, his frequent, sometimes boring prayer sessions, our visits to the local ashrams and playing the karatalas and the kirtan. The moments I hated him because he was too afraid to adopt an Indian looking logo. All those small in-between moments built upon each other piece by piece and re-created the Himalayas in our hearts.

You have to talk over everything. Sanchit was the most open minded person I’ve ever met and the one keenest on working on himself and his short fallings. He knew that my experience and my perspective would be unique addition to this initiative and he was ready to change himself completely to get that and keep this team up and running even if it means stepping over his own culture and millenniums of traditions.

It wasn’t a well planned or forced strategy. It was just life. We were intentional only in one thing – Plunging as often as possible. A toast to the Sanchit in your team. Shoot a comment if we can help you out with more useful tips and stories.