India's share in the global SaaS market will triple to 8% in the next five years, said KissFlow founder 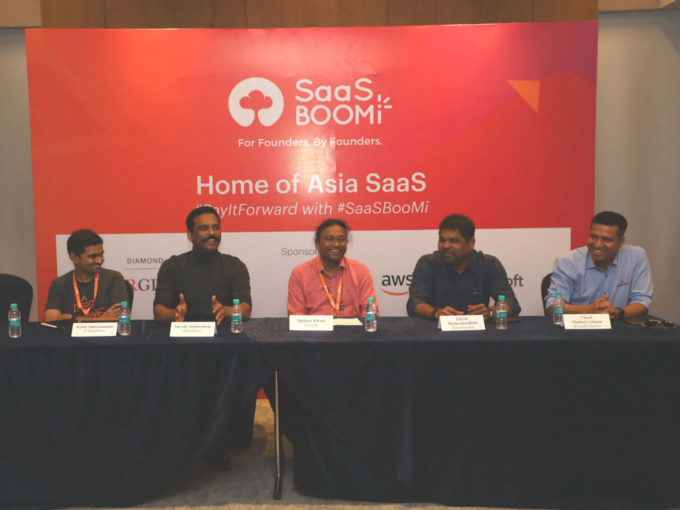 “Learn from the mistakes of others. You can’t live long enough to make them all yourself” — Eleanor Roosevelt

Along these lines and to ensure that the next generation of software-as-a-service (SaaS) entrepreneurs don’t make the same mistakes they did, India’s SaaS pioneers and the first wave of SaaS entrepreneurs have not only focussed on scaling up their businesses but also developing and supporting the SaaS community-at-large.

Chennai, which is known as SaaS capital of the Indian startup ecosystem, has seen successful entrepreneurs such as Sridhar Vembu, Girish Mathrubootham, Suresh Sambandam, Vinod Muthukrishnan, Krish Subramanian among others came together to volunteer and engage in dialogue at SaaSBOOMi.

Bullish about the burgeoning opportunity of the Indian SaaS, the founders talked about the beauty of SaaS, where once customers start paying to enable recurring revenue, the business will keep growing.

Mathrubootham, founder and CEO of Freshworks said there is a wave of innovative SaaS companies and this wave is growing by the month in the Indian market. Mathrubootham envisioned that there will be many unicorns from the SaaS industry in the near future, especially as two new unicorns came up in the enterprise tech sector last year.

To put the growth into perspective in terms of Indian startups, DataLabs By Inc42 noted that funding in SaaS and enterprise tech startups is increasingly growing. Between 2014-2019, the Indian SaaS startups have raised $1.7 Bn across 255 deals. Of this, 151 have been unique startups funded.

The Potential Of India’s SaaS Market

Supporting the vision, Sambandam, founder of KissFlow, said that India’s share in the global SaaS market is only 2.6%, but in the next five years, it is going to triple to 8%, “We are at $1.5 Bn in revenue and we’re going to hit $10 Bn dollars in revenue,” he added.

So why do these numbers matter, especially when talking about sector revenue? Cloudcherry founder Vinod Muthukrishnan explained that for SaaS companies, revenue is 80% gross margin.

“This is the foundation of unbelievably profitable, almost cash printing companies in the long run. Not just $10 Bn where $9.9 Bn is cost,” Muthukrishnan added.

Subramanian, cofounder and CEO of Chargebee, said the effect of SaaS revenues is compounding. He said that businesses build on their thousand customers by continuing to expand in value.

Can India Shift From A Labour-Driven Economy?

KissFlow’s Sambandam further said that it is a big opportunity for India to go from a labour-led nation to IP-led technology business and they have been “longing” for this.

Freshworks’ Mathrubootham added. “We all know that for a country to create significant economic wealth, you have to be in products. And that’s why you can see that the value of Silicon Valley is so much more than all of it combined. So this is our next big opportunity for us to capitalise in terms of really creating economic prosperity.”

Supporting the entrepreneurs’ vision, Shekhar Kirani, partner, Accel Partners, said that with the best of product breed, no one cares where it is built.

“What was missing in Chennai was knowledge, know-how and insight. But there is no question about India being extremely hard working. I’ve never seen entrepreneurs so far working anywhere as extremely hardworking.”

Kirani added, “Every week I get a ping from a global VC that I’m (the VC) hearing great things about SaaS in India. There is in-born interest. I don’t think there is any other industry in the world that has 80% IP driven gross margins. There is a real chance for companies coming out of India to win globally.”

Chargebee’s Subramanian said that companies that are now starting to get the opportunity to first sell in India and have Indian enterprises and customers as early adopters. This will hugely improve the quality of software and the problem-solving for India’s local businesses.