How Google Ramped Up India Initiatives Under Sundar Pichai’s Leadership

How Google Ramped Up India Initiatives Under Sundar Pichai’s Leadership

Google Tez (now Google Pay), Bolo, Neighbourly are some of the initiatives 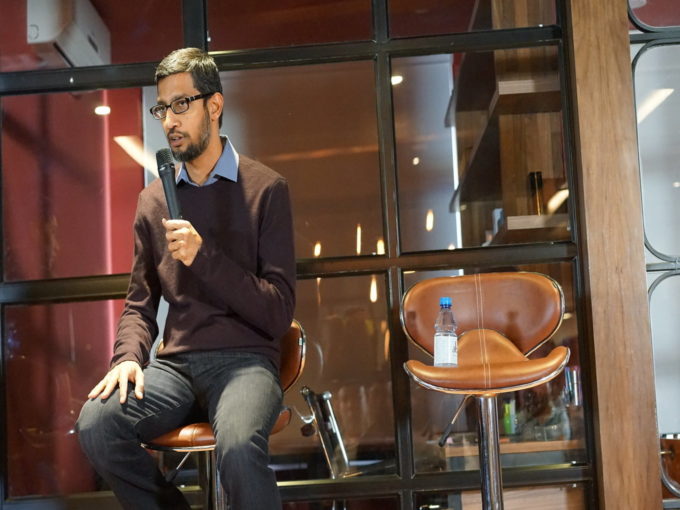 “You can take an Indian out of India, but you can never take India out of an Indian.” Well, this quote may be a cliche, but it surely is the best way to define newly-appointed Alphabet CEO Sundar Pichai’s approach to the country.

Since Pichai took over as the CEO of Google in 2015, he has led around 20 India-specific initiatives. Quite often, Pichai himself has been on the ground to launch these products and see first-hand the problems people face while using technology, says ET.

Tez, now called Google Pay, Bolo, a kids learning platform and Neighbourly are some of the initiatives that tell us about Pichai’s focus on India. The UPI-based Google Pay digital payment app registered almost 7.5 Mn downloads in the 40 days since its launch, said Sundar Pichai back in 2017 while speaking at a quarterly investors’ meet.

The app powered by Google’s speech recognition and text-to-speech technology has been designed for primary grade students. It comes with an inbuilt virtual reading tutor named as “Diya”, which aims at encouraging, explaining and correcting the children as they read aloud. Additionally, Internet Saathi, Google’s digital literacy programme is today spread across 18 states.

“The scale of the Indian market, allows us to now develop maybe products there and actually take it out globally as well. So it’s been an interesting trend for the last three to four years or so,” Sundar Pichai.

In September 2019, the $135 Bn company launched an AI research lab in Bengaluru. To foster AI-based innovation at this centre, Pichai’s team focusses on advancing fundamental computer science and AI research and developing solutions to tackle problems in healthcare, education and agriculture.

Recently, Google also said that it recognised the growing demand for vernacular language content in India and hence integrated greater Indian language support across its existing products and services. The search giant said that Hindi web consumption has grown over 90% during 2015-16 while the English content growth was only 19%.

Google has also been involved in social impact projects. Several years ago, we identified flood forecasts as a unique opportunity to improve people’s lives, and began looking into how Google’s infrastructure and machine learning expertise can help in this field, reads Google’s blog.

Google also selected an Indian not-for-profit organisation, Wadhwani AI for its Google AI Impact Challenge initiative. The aim of the initiative was to help Wadhwani and 19 other selected startups from all over the world on using AI technology.

Google under the leadership of Sundar Pichai has also been investing and partnering with Indian startups. The company has been working on building innovative solutions to challenges across core sectors of the Indian economy such as social, agriculture, healthcare, among others.

For the same purpose, Google Launchpad Accelerator was launched in July 2018. Through the programme Google mentors early-stage startups on various aspects of their business, across the areas of technology, product strategy and marketing.

Now, with the Alphabet crown on his head, it remains to be seen whether building in India and building for India will continue to be a focus for Google in the near future. After all, the company is bullish on the internet growth in the country. In fact, Google’s Next Billion Users initiative is built around developing markets such as India and it wouldn’t be a surprise to see Pichai-led Alphabet continue to back the India-first products and projects.