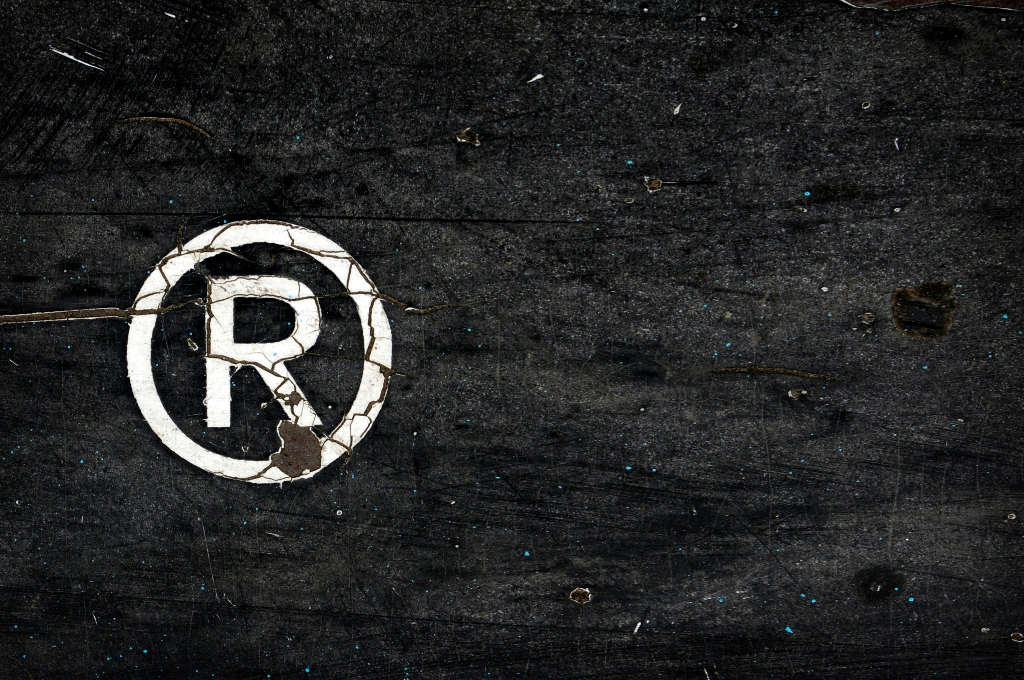 After Palo Alto-based design and decor company Houzz sent a legal notice to Bangalore-based Houzify, claiming “deceptive similarity” between the trademark Houzz and Houzify/Housify, Facebook has deactivated the latter’s page on the social media site.

Gunaseelan Radhakrishnan, Houzify’s co-founder and CEO, refers to this move by Facebook as “execution without trial”. “While Facebook’s policy to ‘execute without trial’ is unfair and questionable, the larger issue here is as to why Houzz is subverting the legal process they have initiated and trying cheap tactics like taking our Facebook page down. Such behaviour harms the budding startup ecosystem in India,” he said.

Here’s what exactly transpired, starting from the legal notice sent by Houzz:

On December 15, 2015, Anand and Anand—the legal firm representing Houzz, Inc. in India—sent a legal notice to K-law (representing Houzify) claiming that the brand names Houzify and Housify impinged on the trademark protections which Houzz enjoyed. The notice called for the following:

To this notice, K-law responded on December 30, 2015 and claimed that its client (Houzify) denies and disputes any exclusive rights claimed by the Silicon Valley-based company over its alleged trademark ‘HOUZZ’.

“At the outset, our client states that your client’s legal notice is extremely farfetched, baseless and without any legal or factual merit whatsoever and denies the contents of the same in their entirety,” the notice read.

It provided a list of other companies in India and other countries using marks which contain the phonetic equivalent of ‘house’, HOUZ, to identify and promote their businesses. It also shared a list of various active websites containing the word ‘HOUZ’, ‘HOUS’ or the suffix ‘IFY’.

“Should your client be ill-advised to initiate any legal proceeding despite this reply, it is incumbent upon them to serve our client advance notice of such proceeding, and such legal action would be strongly defended and countered by our client at your client’s cost and consequences,” read the notice.

On January 20, 2016, Anand and Anand responded back by stating that they deny each and every contention in the response provided by K-law, as it lacks legal and factual merit.

“It is evident from the point of view of a reasonable man with average intelligence that the impugned Houzify and Housify of Metamarket Ventures Private Limited amounts to a violation of the trademark rights that our clients holds in the trademark HOUZZ,” the notice read.

It also commented on the lists of third parties provided by K-law in its response. “It is clear that your client has failed to stand on its own legs and is relying upon third parties’ misuse to justify their adoption of the mark HOUSIFY/HOUZIFY, which clearly intends to take advantage of the reputation and goodwill that resides in our client’s trademark HOUZZ.”

The firm also stated that Houzz has already initiated legal action against several of these third parties.

On February 11, 2016, K-law responded back, on behalf of Houzify, to amicably resolve the matter. Here’s what the letter said:

On March 5, 2016, Gunaseelan tried to log in on the Facebook app and found out that his page “Houzify” has been blocked, based on a trademark complaint from Houzz Inc.  and he was requested to sort it out with the complaining party directly. 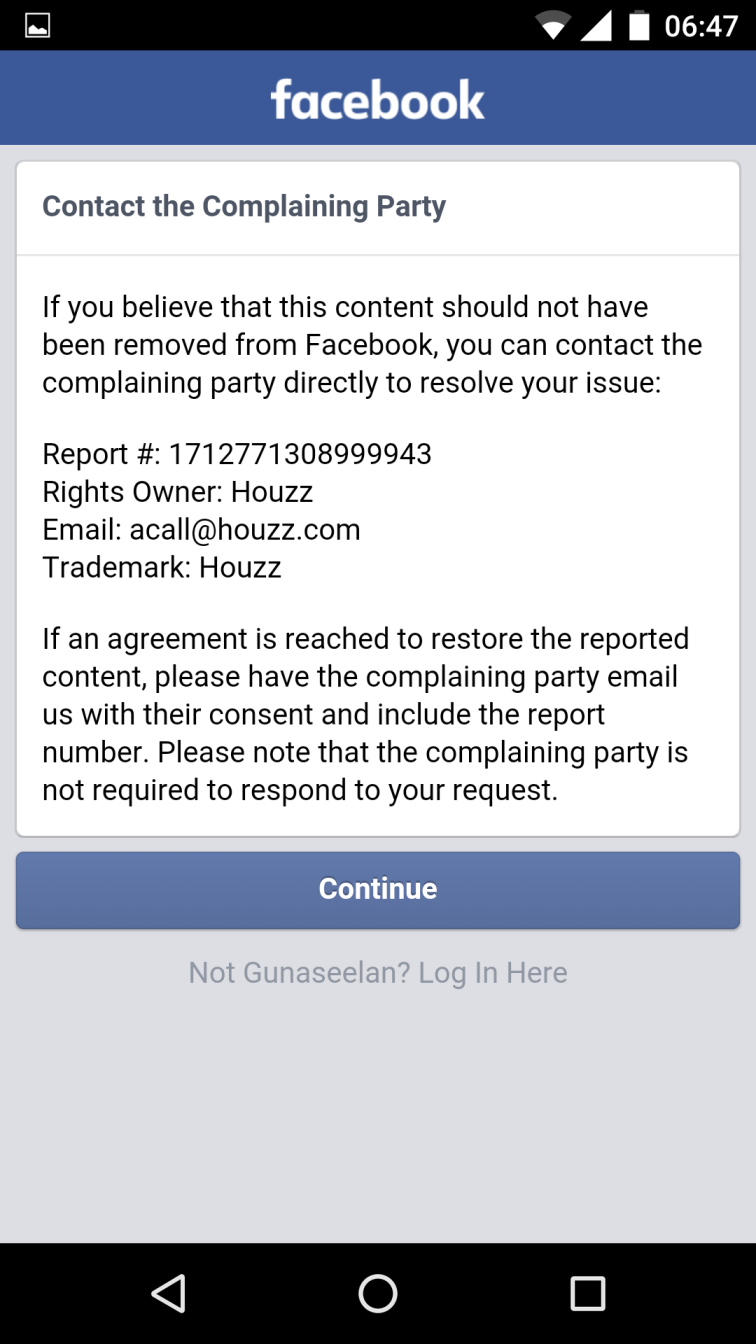 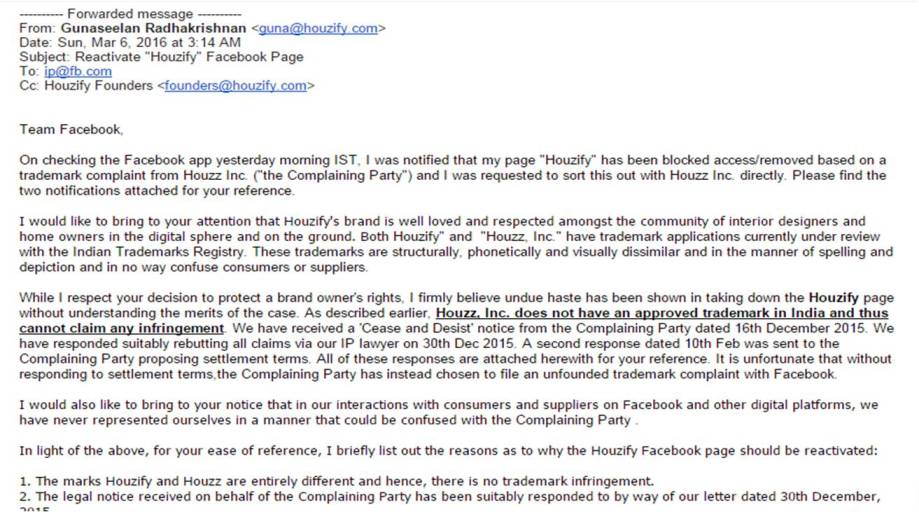 Houzify applied for registration of trademark under two names—Houzify and Housify—in early 2015. The formal process of registration with Indian Trademarks Registry takes 18-24 months from the date of application.

Here’s what Housify had to say about the situation:

Houzify, founded in 2014 by three internet and design professionals, is a home interiors platform, connecting homeowners to homes and interior designers across India. Since its Android application launched in September 2015, the company’s user base crossed the 120,000 mark. It has more than 500 interior designers on its platform. Last September, it raised a seed round of funding from T.V. Mohandas Pai, founder of Aarin Capital, and Naveen Tewari, founder & CEO of InMobi.

Houzz was founded in 2009 by Adi Tatarko and Alon Cohen as a result of their own home remodelling project. It connects homeowners, home design enthusiasts and home improvement professionals across the country and around the world. As of September 2015, it had over 35 Mn monthly unique users and over 1 Mn active home professionals globally. According to Crunchbase, it has raised $213.6 Mn in 4 rounds from 17 investors. It raised its latest round in October 2014 – $165 Mn in a Series D round led by Sequoia Capital. Existing investors Oren Zeev, New Enterprise Associates, GGV Capital, Kleiner Perkins Caufield & Byers, DST Global and T. Rowe Price also participated in this round.

The fact that Facebook took down the page of Houzify, based on a trademark infringement complaint from Houzz Inc., without even informing the Bangalore-based company has not gone down well with many in the Indian startup ecosystem. Many believe that this move was hasty, rash and uncalled for.

According to Houzify, “Instead of following the due legal processes they initiated, Houzz chose to use strong-arm tactics, so characteristic of corporate giants, focused on stifling local competition in any way possible.”

“Such actions bode ill for the future. On the free and open Internet, powerful corporations wield the ability to subvert legal process by taking unilateral decisions which unbalance the playing field,” the company added.

Sharad Sharma, co-founder of iSPIRT Foundation, stated, “Houzz’s impending launch in India validates the huge market opportunity in the home decor space. Healthy competition is good for everyone and having initiated a legal process, Houzz should have continued down that path instead of bringing down the Houzify FB page. Such tactics stifle local startup ecosystem. Houzify is well poised for a larger play and that must be worrying Houzz.”

According to Kiran Jonnalagadda, co-founder and CEO of HasGeek, Facebook has acted hastily by taking down Houzify’s Facebook page without consulting or informing the company first.

Divakar Vijayasarathy, CEO of Meeturpro, believes that this move is like convicting based on assumptions, even without any investigation. “Facebook seems to have acted merely on the basis of prima-facie complaint and decided to lean towards a larger client, clearly for commercial reasons.” He puts forth a very valid question – would FB have removed the page of Houzz Inc. on a mere compliant from Houzify?

Devyash Patel, founder and CEO of MyOnlineCA, believes that, although, Facebook legally has the right to take down any Facebook page in case of any trademark infringements (as per its policy which is accepted by all user by default upon signing up), the social media company should have tried to gather some proofs regarding the trademark infringement and informed the Bangalore-based company before taking it’s page down.

However, Divakar is of the opinion that no person can be penalised without an opportunity of a fair representation to prove his/her side of the case. “This is completely against the principles of natural law and justice – whichever or wherever be the jurisdiction,” he stated.

“A platform like Facebook—one that is driven by the core values of connecting people all over the world—is expected to demonstrate an empathetic approach to both sides of a dispute. To remove Houzify’s page without any investigation into the trademark claims in the country of its founding, shows a marked disrespect to protections that are already enforced by IP regulators and courts in India,” stated T Mohandas Pai, founder of Aarin Capital and an investor in Houzify.

“We call on Facebook to respect the processes that protect Houzify’s branding domain, and to restore its page until the matter is resolved in the Indian courts,” he added.

Facebook, taking such serious steps, so abruptly, depicts how ill-equipped it was to launch Free Basics in India. Based on a complaint from a Silicon Valley company, the social media giant didn’t think twice before hurting the smaller Bangalore-based company. This shows how the launch of Free Basics could hamper the interests of startups in India.

“This is a reminder that Facebook and other websites are private properties and your constitutional right to free speech does not exist on them. While you do have your fundamental rights on your own website, we are living in a world where you have to depend on large companies like Google, Facebook and Twitter to exist on the Internet, without having any rights guaranteed on them,” said Kiran.

“This is why there are increasing calls to regulate such companies. Regulation is rarely welcome, so Facebook and others could do well to reconsider how they protect their users,” he averred.