Encapsulating The 6 Days Journey Of Inc42 Team In Rajasthan, It Presents A Detailed Analysis Of Digital And Startup Policies Adopted By The State 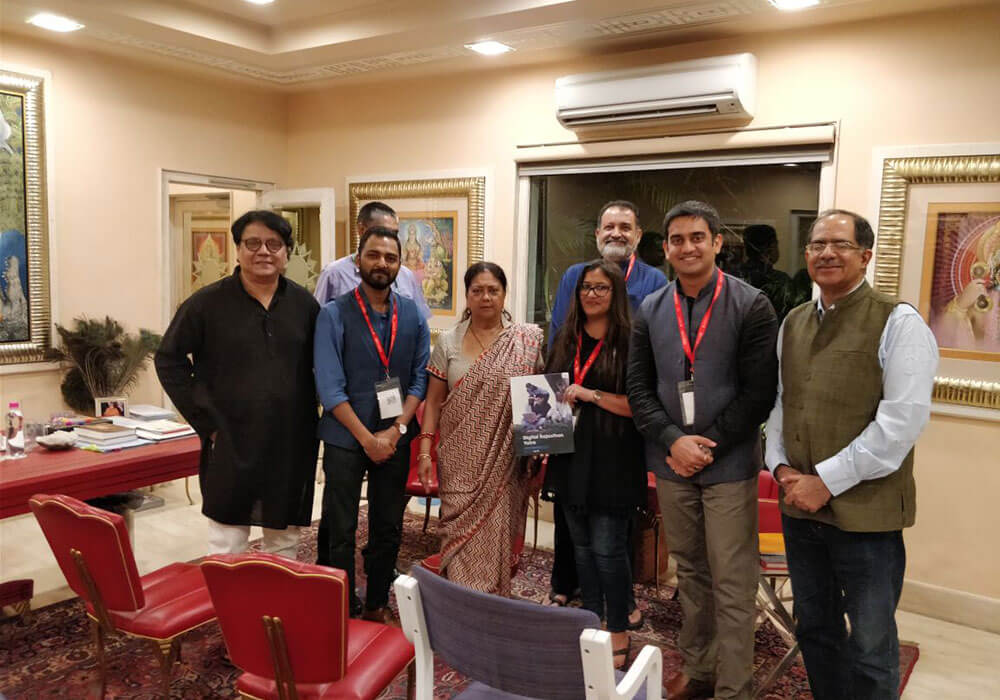 On the occasion of Rajasthan IT Day 2018, Rajasthan’s Honourable Chief Minister Vasundhara Raje has launched Inc42’s Digital Rajasthan Yatra report. The report encapsulates the six days journey of Inc42 team to the five cities of Rajasthan.

As part of a six-day tour ahead of the Rajasthan IT Day on March 21, a team from Inc42 travelled across five major cities – namely Jaipur, Ajmer, Bhilwara, Kota and Tonk covering the minute details and major insights of the state’s startup ecosystem and digital reformation.

The aim of the initiative was to conduct in-depth interviews and group meetings with Rajasthan’s startup ecosystem enablers, government officials, and startups & collect and record data on how the locals are utilising Internet, smartphones, and different applications to boost their businesses, highlight the inspiring stories of women empowerment, as well as assess the increased adoption of digital technologies in the urban & rural landscape.

The report also highlights the impressive & inspiring stories of women empowerment and economic development in the state.

As TV Mohandas Pai, Chairman Aarin Capital Partners mentioned in the Digital Rajasthan yatra report, “’Digital Rajasthan’ is a Yatra across the State to focus attention on the impact on citizens and their adoption of digital technology.  All of us dream of a day when all citizens enjoy a good quality of life. Now we know that a Digital Rajasthan can make this happen and is already positively impacting the lives of its citizens across the vast State.”

Rajasthan is one of the first states to embrace e-governance and introduce a slew of reforms to improve upon the ease of doing business index worldwide. Currently, at position #6, the state government is working to make ‘digital’ a welcome phenomenon not only in the urban areas but even the rural and the remotest parts of the state.

With this, Rajasthan further aims to become a leading startup hub in line with the existing startup hubs like Andhra Pradesh, Kerala and more.

For instance, during the Digital Rajasthan Yatra, a small school headmaster in Tonk shared with the Inc42 team, “Earlier, the students used to just cram data. Take, for example, school children crammed that Rohida is the state flower of Rajasthan. They knew nothing about it except its name. Now, the teacher shows them its picture on their smartphones along with other details. Now, students understand it better and it helps them to remember for a long time. This is just a small example of how technology can play a vital role in ensuring quality and cater an impactful education.”

Inc42’s Digital Rajasthan Yatra report further showcases how the state is rapidly transforming from being a tourist destination to a startup hub, by bridging the digital divide and opening opportunities for all – youth, students, women, working professionals, amongst others.

“Information and Communication Technology (ICT) is constantly changing the manner in which information flows to citizens. It is a need of the hour that good governance harnesses the energy of ICT and puts in place tools that allow improved delivery of service and bridge the digital divide. This is our vision for Digital Rajasthan.”

As mentioned in the Inc42 report, the Honourable CM Vasundhara Raje’s vision shared above is not far from getting accomplished.

As per AngelList, there are currently 750 active startups in the state, along with more than 51,000 entrepreneurs. According to Inc42 DataLabs Funding Report 2017, around 30 startups based out of Rajasthan raised $148 Mn (disclosed) funding altogether between 2014-17. To support the growing number of startups, a number of accelerators, as well as incubators, have also emerged across the state. This includes the likes of iStart Nest, Startup Oasis, TiE Rajasthan amongst others.

Spurred by the government’s efforts, till date, 700 startups have enrolled on its flagship initiative iStart, which is in line with the Startup India Hub, in just four months. These startups are leveraging technology to develop solutions that not only drive economic growth but also help solve pressing social problems.

Further apart from setting up Rajasthan Stack to ensure that startups have free access to all and every service, resource, application, and infrastructure offered by the Government of Rajasthan, the state officials are also signing MoUs with different public and private organisations to boost the internal working mechanism of the state government.

The recently conducted series of 24 – 36 hours hackathons such as EduHack, Green-a-thon, coding Hackathon during the four day Rajasthan IT Day is a clear indication of the efforts the state officials are undertaking. Now the Rajasthan IT Day celebrations have come to an end, the Rajasthan government will be full fledgedly working to raise its flag on the DIPP state startup ranking board.