Here’s What Forced CAIT To Go On Hunger Strike Against Amazon, Flipkart

Here’s What Forced CAIT To Go On Hunger Strike Against Amazon, Flipkart 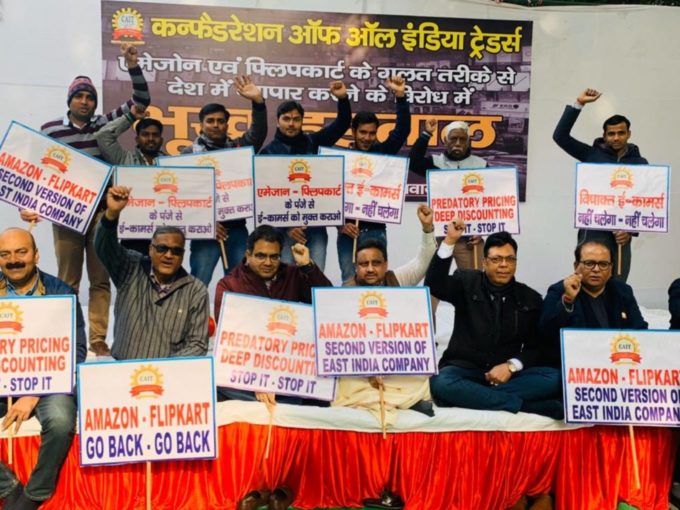 It seems like writing complaint letters, alleging violation of government policies by ecommerce majors Amazon and Flipkart, to different authorities didn’t work out for the Confederation of All India Traders (CAIT). And now to further show their resentment against Flipkart and Amazon, the CAIT, on Friday (December 27), staged a day-long hunger strike across 500 cities in India.

The protesters are demanding the government to take immediate action against not only Amazon and Flipkart but also against other online companies working in logistics, travel, home buying, consumer durables and other segments.

Sharing the motive behind this hunger strike, Praveen Khandelwal, secretary-general of CAIT, said that the organisation wants to see the Indian ecommerce market free of all unhealthy and unfair business practices. “We will continue our nation-wide agitation until the government takes any action against them,” he added.

In Delhi, the hunger-strike was staged at Jantar Mantar, which was attended by traders coming from the Delhi NCR region. Further, Khandelwal, along with CAIT’s national president BC Bhartia, alleged that both Amazon and Flipkart are now trying to build a narrative of being trader friendly by luring small traders to come to their platform.

Claiming that these ecommerce companies indulge in preferential seller system, CAIT alleged that over 80% of their sales are fulfilled by only 10 to 15 preferred sellers on the platform. “The traders are not going to fall in their trap,” CAIT added.

The traders’ body, disheartened with MSME Ministry partnering with small companies, said that seven crore traders strongly condemn this action and will foil any such plans of the ministry.
According to CAIT, protesting traders across the country are criticising Amazon and Flipkart for the devastation of their businesses. Moreover, the traders’ body also claimed that a large number of businesses in the country have been shut down because of these companies. “How can anyone be allowed to continue business operations by indulging into brutal violation of the policy of the government,” CAIT said.

Before calling for the hunger strike, CAIT has written numerous letters to various ministers including Prime Minister Narendra Modi. However, it failed to receive any attention from any of them.

In a letter, CAIT, on December 3, urged PM Modi to take notice of the business models of Amazon and Flipkart as, according to them, they are violating the Press Note 2. CAIT added that practices followed by both these companies such as deep discounting, predatory pricing, controlling inventory and maintaining preferential seller system have created an uneven playing field, unfair and unethical competition.

Moreover, the traders’ body, on November 25, in a letter to the Finance Minister, appealed to initiate a high-level enquiry to probe the alleged avoidance of due tax liability by these companies.