Indian startups are projected to raise $13.7 Bn in funding this year 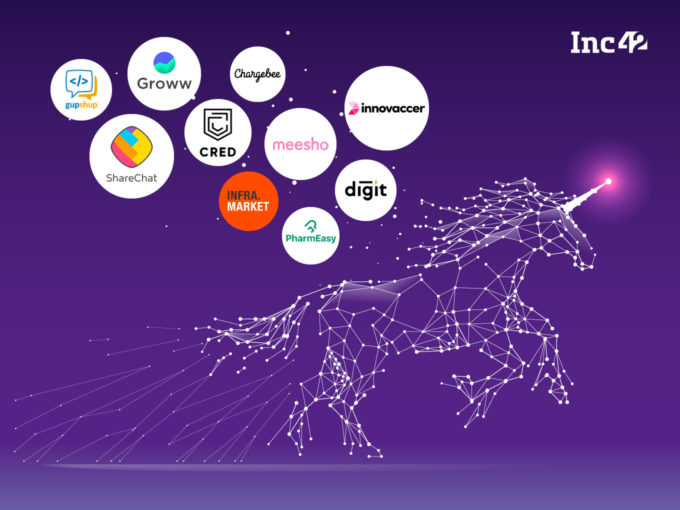 It’s raining unicorns in India. Ten startups have already made it to the list in the first four months of 2021 and more will be riding in pretty soon as India is bound to raise $13.7 Bn this year. The unicorn story of 2021 is the one with many firsts, as the ecosystem witnessed the entry of first healthtech, first social commerce, first infrastructure technology and first epharmacy unicorn.

About six new startups — fintech startup CRED, social media startup ShareChat, wealth management company Groww, messaging platform Gupshup, social commerce startup Meesho and epharmacy PharmEasy — entered the unicorn club in the last six days. With this, India unicorn club has grown to a team of more than 50 startups. At this rate, India will manage to get more than 100 unicorns by 2021, as suggested by Inc42 Plus’ previous report. 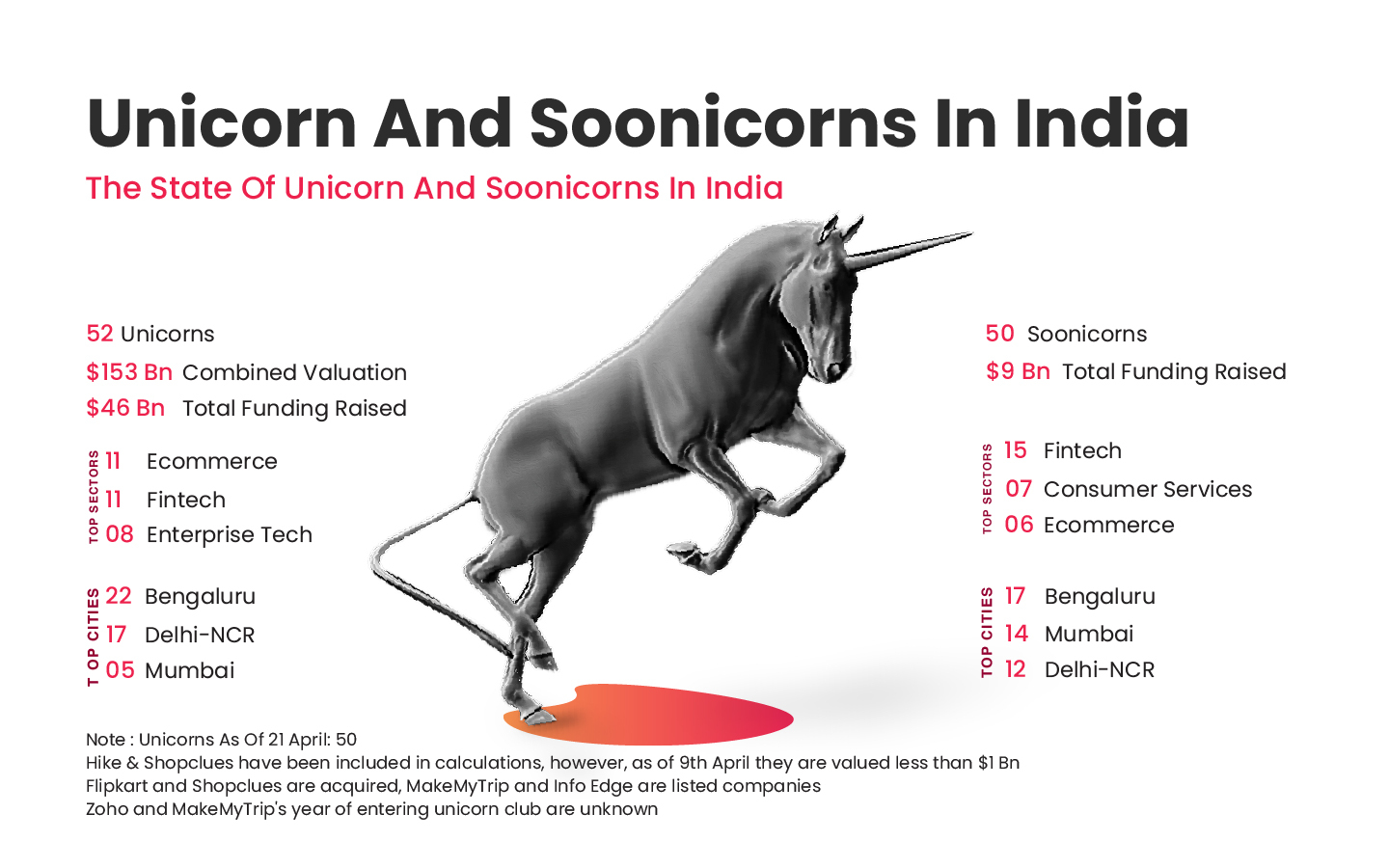 As per the latest tally, ecommerce, fintech and enterprise tech are among the popular sectors in the Indian unicorn club. There are 11 ecommerce unicorns, namely Flipkart, Snapdeal, FirstCry, Infra.Market, Udaan, Paytm Mall and others. The fintech sector has 10 startups in the list with Paytm, PhonePe, Zerodha, Razorpay, Pine Labs being examples. Enterprise tech startups in the unicorn club include Zenoti, Freshworks, Zoho, Druva, Icertis and others.

Startups That Entered The Unicorn Club In 2021

Bengaluru-based insurtech startup Digit Insurance was the first startup to enter the Indian unicorn club in 2021. The company had raised $18 Mn (INR 135 Cr) from existing investors A(! PArtners, Faering Capital and TVS Capital in January, at a valuation of $1.9 Bn.

This was the company’s second external funding round, the first one coming in January 2020. The company had raised $84 Mn (INR 614 Cr at current conversion rate) as a part of this round, in which Indian cricketer Virat Kohli and Bollywood actor Anushka Sharma infused about $340K (INR 2.5 Cr). Overall, the company has raised $200 Mn to date from for internal and external infusion.

Digit Insurance is a tech-driven general insurance company, founded in 2016 by Kamesh Goyal and Prem Watsa’s Fairfax Holdings. The company offers customised policies on health, auto, travel, smartphones, commercial properties such as stores and holiday homes. It claims to have recorded a 31.9% growth between March 2020 to December 2020, with 20 Lakh Indians opting for its illness insurance product which offered protection against Covid-19 and seven vector-borne diseases including dengue, malaria and others

The strain on global healthcare due to Covid-19 was enormous and shocking with the fear of mass infection hanging over the public. If not for the healthcare providers putting in the extra effort to ensure smooth recovery of those infected, the global tally of deaths would have been significantly higher. As the world stepped into the lockdown, healthcare became of utmost importance as did solutions for the sector.

Innovacer was one of the shining stars of the Indian startups ecosystem, and ended up becoming the first Indian healthtech unicorn. The company which develops solutions for western markets like the US, analyses healthcare data to provide actionable insights to healthcare providers, hospitals, insurance companies and other organisations and businesses.

The product is used by several governments and private institutions to maintain medical records of more than 3.8 Mn patients and generates savings of $400 Mn for healthcare providers. The startup aims to take its current number of patient records to 100 Mn+ and reach out to 500,000 caregivers over the next five years.

The Indian social commerce segment may be at a nascent stage at this point but it is poised to grow at a compound annual growth rate (CAGR) of 55%-60% to reach $16 Bn-$20 Bn gross merchandise value (GMV) by 2025. One of the biggest milestones of the segment has to be Meesho’s entry into the unicorn club, which will have an overall impact on the segment and its growth momentum.

Founded by IIT-Delhi graduates Aatrey and Sanjeev Barnwal in 2015, Meesho is an online reseller network for individuals and small and medium businesses (SMBs), who sell products within their network on social channels such as WhatsApp, Facebook, and Instagram. The platform has about 13 Mn individual entrepreneurs, bringing the ecommerce benefits to 45 Mn customers pan India.

The company claims to have registered 100K registered suppliers to over 26K postal codes across 4,800 cities, generating over INR 500 Cr ($68 Mn at current conversion rate) in income for individual entrepreneurs. It has raised $415 Mn funding to date, from investors like SoftBank, Prosus Ventures, Facebook, Shunwei Capital, Venture Highway and Knollwood Investment.

It competes with other younger companies GlowRoad, Dealshare, CityMall and Bulbul, who too have a lengthy list of investors backing them.

There are very few Indian unicorns that have maintained profitability from the very beginning. This year, there was another such startup, Infra.Market, that entered the club riding on its profitability and strong growth. The company, founded by Aaditya Sharda and Souvik Sengupta in 2016, is a B2B online procurement marketplace for real estate and construction material that leverages technology to offer fair pricing and a smoother procurement experience for its customers.

The platform aggregates demand and matches it with the supply chain, with wholesale pricing on materials, along with affordable credit or financing, which is not always available for small businesses in this sector.

With eyes on market dominance and the unicorn club, API Holdings had set out to forge a merger between its subsidiary PharmEasy and its rival Medlife in 2020. After the merger came through in the latter part of last year, the company was able to achieve one of its goals — entering the unicorn club. The company raised $323 Mn in a Series E funding round, at a valuation of $1.5 Bn. Notably, it is the first Indian epharmacy unicorn.

PharmEasy was founded in 2015 by Dharmil Sheth and Dr. Dhaval Shah to the chronic care segment and offers a range of services such as teleconsultation, medicine deliveries, and sample collections for diagnostic tests. It connects over 60K brick-and-mortar pharmacies and 4K doctors in 16K postal codes across India.

The platform also offers a SaaS solution for pharmacies to use in procurement combined with delivery and logistics support, and credit solutions. It claims to have served over 20 Mn patients since inception.

The company’s merger with Medlife was in the aftermath of the rising competition in the segment. Reliance had acquired rival Netmeds, Amazon launched its own epharmacy vertical and Flipkart too was contemplating its entry. The only other competition left was 1mg, which too was in talks with the Tata Group for an acquisition deal. The company hopes to fend off the competition to reach 100K pharmacies in the next year.

With only INR 57 Lakh ($76K, at current conversion rate) as operating revenue in the financial year 2020, Kunal Shah-led fintech platform CRED entered the unicorn club at a whopping valuation of $2.2 Bn.

Several big names of the VC ecosystem like DST Global, RTP Global, Tiger Global, Greenoaks Capital, Dragoneer Investment Group and Sofina has placed their bets over CRED, which focuses on premium credit card users, offering them rewards and benefits for paying credit card bills. In the last two years, CRED claims to have added over 5.9 Mn credit card users with a median credit score of 830.

Last year, the company decided to experiment with ecommerce to shore up revenue and capitalise on its user base. It forayed into ecommerce with CRED Store and in December, CRED launched CRED Pay to allow users to use their CRED reward coins across ecommerce sites and unlock discounts.

The company is in the process of closing deals with ecommerce partners such as BigBasket, Dineout and ixigo. It partnered with Razorpay and Visa to develop the features. Before launching the payment feature, after a pilot project with over 30 merchants including the likes of Vahdam Teams, The Man company,  Epigamia and Man Matters among others.

India found its second wealth management unicorn in Groww only eight months after bootstrapped Zerodha valued itself above $1 Bn. Just like Zerodha, Groww allows users to  invest in stocks, mutual funds, ETFs, IPOs, and Gold using its tech platform available via mobile application and web platform. The company had also launched stocks with an easy-to-use interface for do-it-yourself (DIY) investors.

The five-year-old company was founded by ex-Flipkart employees Lalit Keshre, Harsh Jain, Neeraj Singh, and Ishan Bansal, and has over 15 Mn registered so far. More than 60% of Groww’s users come from smaller cities and towns in India and 60% of them have never invested before, the company claims.

The company raised $83 Mn in its Series D funding led by Tiger Global this week, becoming the fiftieth Indian unicorn. The company had raised $30 Mn in Series C round last September. It intends to use this capital to invest in new products, acquire talent and continue building our financial education platforms.

ShareChat has finally found its way to the unicorn club, after capturing the attention of users across Tier II and III India. The regional language social media startup has witnessed massive growth in 2020, as its monthly active user base grew 166% from 60 Mn to 160 Mn in one year. The most interesting trend that the startup witnessed was that it stepped out of its comfort zone in Tier II and Tier III regions of India and started garnering attention in Tier I and metro cities during the pandemic, without having an English interface.

ShareChat, which was founded by IIT-Kanpur alumni Farid Ahsan, Bhanu Singh and Ankush Sachdeva in 2015, started its journey in 2015 as a content-sharing tool for WhatsApp with users sharing about 100K content pieces per day. It found its calling in the vernacular social media platform and has been focusing on it ever since. The company also launched a short video platform Moj last year, after the Indian government banned Chinese apps like TikTok and Likee. Moj has also been garnering the attention of the audience and has about 80 Mn monthly active users currently.

ShareChat has raised $828 Mn in eight funding rounds, with $502 Mn coming in its Series E round. The funding ends speculation around the possible investment by Google in Sharechat.

San Francisco-headquartered Gupshup is the ninth startup to enter the unicorn club in 2021, after raising $100 Mn in its Series F funding round led by Tiger Global Management. The company has been valued at $1.4 Bn in the round. It also hinted that the current funding will be followed by a second close with significant additional funds, which will be used to further scale its product suite and go-to-market initiatives overseas.

Founded by Beerud Sheth in 2004, Gupshup is a conversational messaging platform that caters to businesses from multiple sectors including banking, ecommerce, hospitality, consumer goods among others. The company said that over 80% of its business comes from India followed by the US and Latin America.

Some of its clients include Kotak Mahindra Bank, IndusInd Bank, HDFC Bank, Ola, Zomato, and Flipkart. The 17-year-old company has so far raised $150 Mn and closed its Series E round in 2011.

Chennai-based subscription management platform Chargebee became the tenth unicorn of 2021, after raising $125 Mn in its Series G funding round at a valuation of a whopping $1.4 Bn. Once again, the round was led by Tiger Global, along with Sapphire Ventures and Insight Venture Partners. Steadview Capital also participated in the round, which tripped the company’s valuation in less than six months.

The company claims to cater to 2500 businesses across 53 countries. Chargebee’s customer portfolio includes the likes of access management company Okta, Freshworks, Calendly, Study.com, among others.

This is a running article. The story will be updated as more unicorns are added to the list…