Furry Animal Kiddie Blankets, A Super-Quick Wine Chiller, A Bizarre Dating App — These Are Just Some Of The Fun Ideas On Shark Tank On Colors Infinity 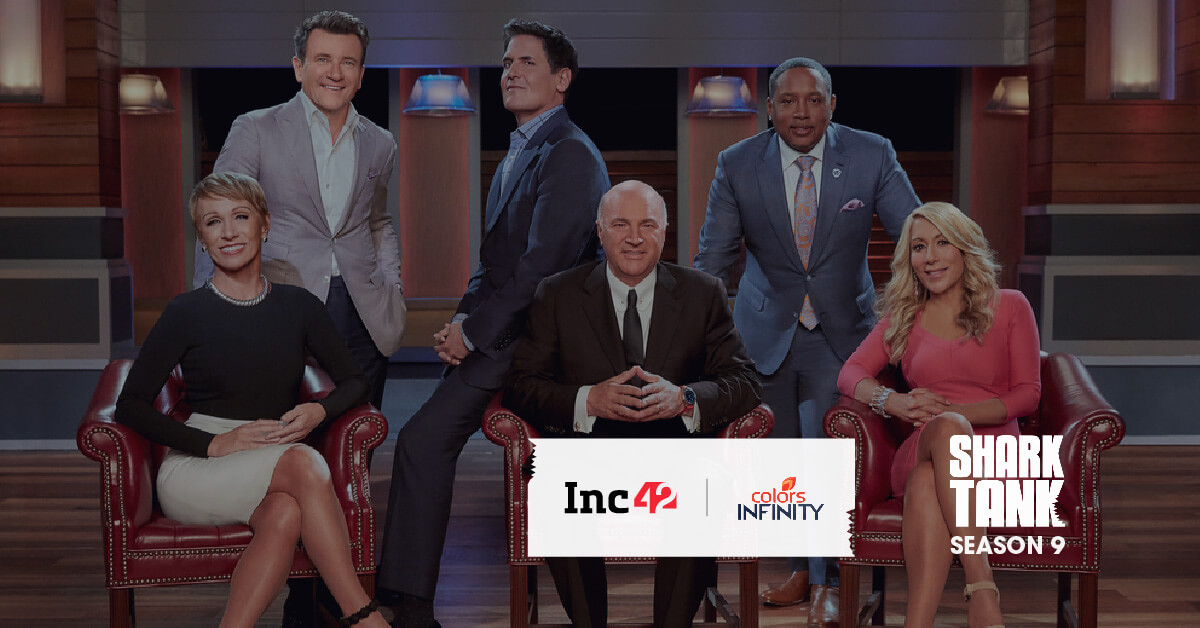 The Startup world had Lucky number 5 calling the shots in episodes 11 and 12 of Shark Tank season 9 — the startups which stood apart were all offering a stake of 5% to the sharks! While some of the Startup founders found swimming with the Sharks (investors) in the tanks a breeze, some others didn’t find the going that easy. However, none of them were really eaten alive (read roasted) by the Sharks in these episodes of Shark Tank.

Inc42 in association with Colors Infinity is regularly bringing our readers updates from all that’s going on in the tank from Season 9 of the business reality show Shark Tank.

Here’s a glance at the startups that caught our eye this time:

If we go back in time and shuffle through the memories of our childhood, most of us would remember having a favourite soft toy to cuddle, play, and sleep with, a toy that went everywhere we went and made us feel safe.

Moms Kelly and Callie, both educators, have launched a startup that makes a range of cute furry hybrids between stuffed animals and blankets for kids. Made of the softest materials, the product is aptly called Slumberkins. Slumberkins plays in a niche market which has a steep price point. All of their sales have come through the sizeable following they have garnered by leveraging social media platforms.

The margins were not that impressive, but the founders found production partners overseas to bring the cost down by two-thirds. Now, they want to launch the brand with retailers and get these fuzzy little creatures in a lot of tiny hands. Kelly and Callie were on Shark Tank pitching for $175k for a 5% stake. Shark Mark Cuban thought that the product should remain niche so they can continue building it slowly with have more control over retailing it. Kevin O’Leary did not agree with the valuation but Lori Greiner found the offering unique but did not make an offer.

Slumberkins bowed out of the tank without any shark bites, but the founders did not look like they were going to stop until they achieve their mission.

Imagine you finally are on a date with someone you really like, you make all the right moves, and say all the right things, only to realise that the wine is not chilled the way your date would like it.

Enter startup ProntoBev, the world’s fastest wine chiller. As soon you keep a bottle in the chiller, the stainless-steel interior jumpstarts a rapid heat transfer process which helps the wine achieve the right temperature, depending on its composition. ProntoBev even comes with suggestions on what wines should be had at what temperatures and its built-in thermometer monitors the chilling. The chiller can cool wine by 20 degrees in just three seconds. Now, that’s really doing the job pronto, isn’t it?

Alexender Simone, the founder of ProntoBev, was pitching for $100k for a 5% stake. Daymond John was evidently livid with the valuation since the only little sales that ProntoBev had made were on a crowdfunding platform. All the Sharks opted out and it was up to Kevin, the resident wine connoisseur, to make his bid. He offered the money in exchange for half the company, which did not leave Alexander with any wiggle room to raise more money without losing control of his own company.

Mark, who had earlier bowed out and who is always against any founder giving up the control of their company so early in the journey, made an offer for 25% contingent on Alexander being able to raise another round with the same valuation. Kevin could not believe the deal was scooped right from under his nose, but then again everyone was happy they got to drink some chilled wine!

Hater was a game changer in Shark Tank. Once it’s founder Brendan Alpen had made his pitch, the Sharks were pitching to him to get a stake in his company. And with good reason. Hater is a novel idea in digital dating — an app that matches people based on what they hate instead of what they love! There are numerous studies proving that people who hate the same things form closer bonds than people who love the same things. The app throws various questions at users and asks them to give ratings from liking it, to being neutral, or just detesting it.

Half a million people have downloaded Hater so far. The app is free, so it hasn’t made any money yet, but the most obvious revenue stream would be selling the data to advertisers who can then target users on the basis of not just what they liked but also what they dislike the most. Hater was originally a comedy sketch idea done by Brendon Alpen, who worked on Wall Street for years before going all in with his business. Hater has already raised 500k at a 4 Mn valuation from a gaming company. At Shark Tank, Brendon was pitching for $200k at a 5% stake.

Shark Rohan Oza wanted the app to concentrate on the top one or two cities, where they are popular, get maximum density, and carry over the learning and the buzz to other markets. Barbara Corcoran offered $250k for 5%, which is more money than asked for, but Brendan had to decide on the spot. Lori quickly chipped in with her offer, $200K for 10% which was matched by Mark. Then it was up to the Sharks to pitch to Brendan about what they could do for Hater. In the end, Brendon chose Mark because of his experience in technology and celebrity connections.

Everyone wants to keep a track of their health but not everyone has the time to go to the hospital or a lab to run ever-so-expensive tests. And if you do, what you get is a summary of results that you do not understand completely.

This is the problem that startup Everlywell is trying to solve. Their custom test packages are easy to do at home; the samples are sent to one of their fully accredited labs and, the results are available in a secure online account with a complete history and detailed explanations.

Julia Cheek, the founder of Earlywell, had an impressive background with a business degree from Harvard and she had managed to raise $5 million already. The company was projecting $15 Million in turnover in a year’s time, boosted by its new products on Genomics and an STD testing kit.

Julia was pitching for $1 million for a 5%. Everyone seemed to love her presentation and the business but most of the Sharks declined to fund what could be a money-guzzling business. About 75% of the customers for the business were women and that got Lori interested. She offered a $1 Mn line of credit for a 5% equity. Good for Julia, as she did need a credit line to maintain her inventory, and Lori could market the product to women consumers better than anyone.

All’s well that ends well. At least for most of the startups on these episodes of Shark Tank season 9, the end was a happy one. We’re halfway through this season, which means there is a lot more juice from the world of the Tank coming your way. Stay tuned!