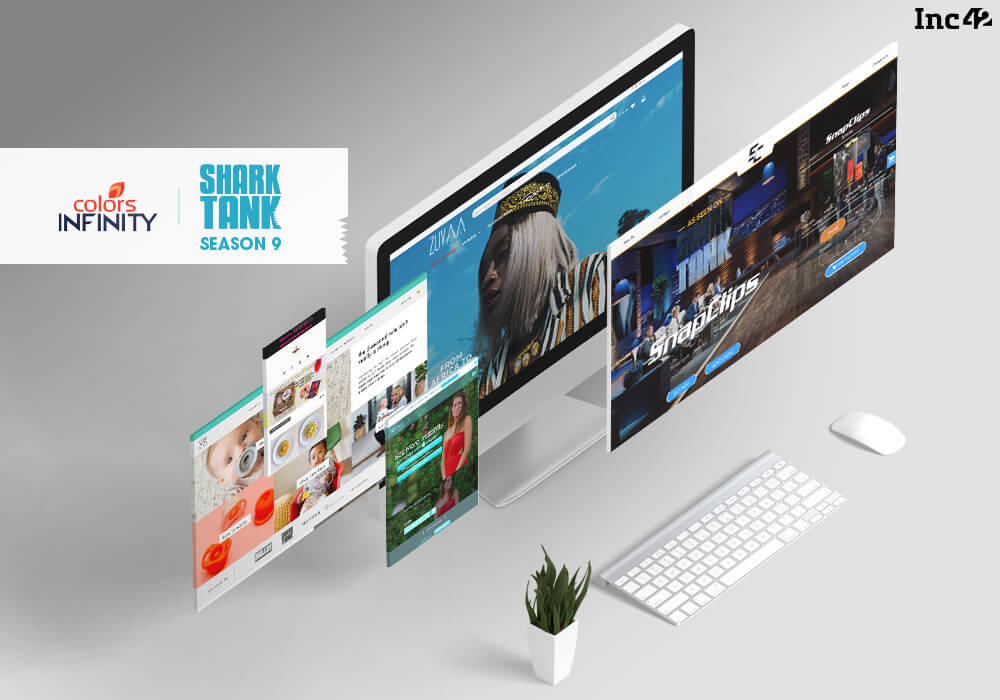 Ever since the launch of Shark Tank Season 9, the show has brought drama, edge-of-the-seat moments, and a lot more entertainment than we could have hoped for from the world of Startup founders right into our living rooms.

However, the good old rule of the entrepreneur-and-Startup game never changes — no matter how good your intentions or pitches are, if your idea doesn’t spell numbers from the word go, you are not going to grab eyeballs. A unique idea is not enough; you must have a feasible product and an impressive number of takers for it to get billionaire investors interested in partnering in your Startup.

Sometimes, not having registered any sales (or not wanting to go to college) can also go against you, as Disha Shidham of Savy found out. And if you have a brilliant product — like healthy doughnuts aka The Dough Bar — the Sharks will fight for a piece of your company.

Inc42 in association with Colors Infinity has been summing up all the action from the business reality show Shark Tank Season 9. Episodes 18, 19, and 20 of the show had the usual display of grit, emotions, and unique ideas by Startup founders. All in all, a fun prime-time watch for its viewers.

Growing up in Nigeria, Kelechi Anyadiegwu was always enamoured by the unique prints, textures, colours, and vibrancy of African textiles and accessories. She was equally frustrated by the lack of a global platform, tools, and resources for the thousands of designers in the African continent crafting beautiful indigenous products and clothes that would be coveted the world over.

This bothered her so much that she decided to do something about it and started Zuvaa — a Startup which is a marketplace for African products to help them find their place under the sun. The Startup grew fast to become an online marketplace to reckon with. It showcases products from 85 handpicked designers and has a gross merchandise value (GMV) of $2 Mn. Kelechi achieved this with an initial investment of just $50k and owns 92% of the company; the remaining 8% is with her advisors. 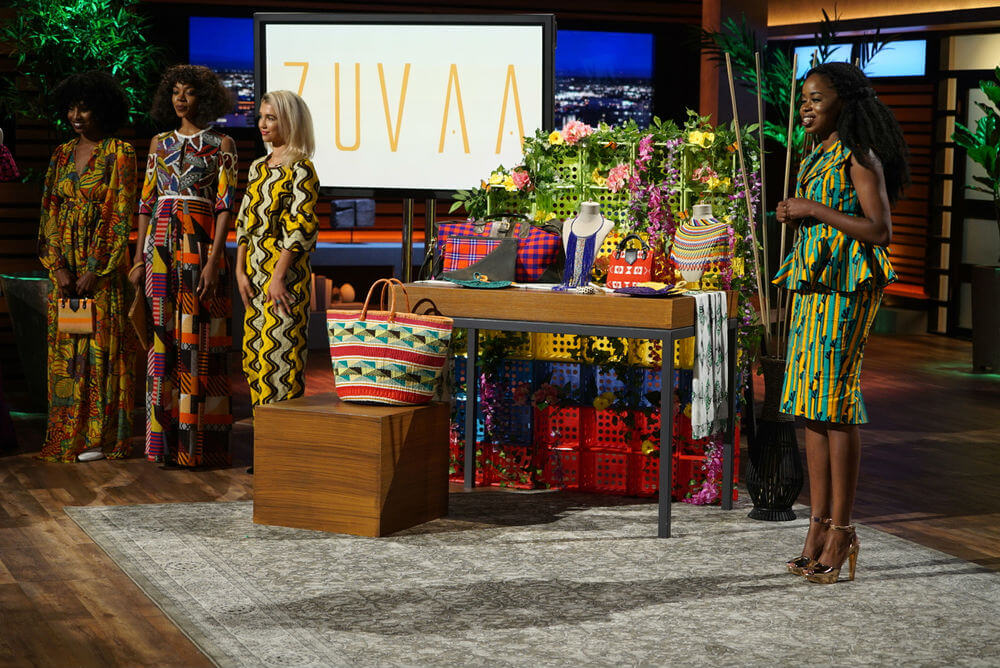 Zuvaa holds no inventory and charges the designers a flat fee of 17% as commission along with a listing fee of $50 a month. The orders are delivered directly to customers by the designer or the company’s fulfillment centre in Atlanta, Georgia. Zuvaa sees a footfall of 120k customers a month and is already breaking even. Kelechi was pitching for $460k at a 10% stake. She needed the money to double down on increasing the seller base and for marketing the platform to the global audience.

The Sharks did not agree with the valuation and, one after another, they opted out. Sara Blakely made an offer but wanted half of the company and Kevin O’Leary played his debt card once again, asking for 10% equity just for opening a line of credit.

Kelechi declined the offers. Her online marketplace definitely needed some Sharks to invest in, but they were not the ones in this celebrity Tank

You’ve probably used a pacifier (for your child) or seen someone use it at some point in your life. And you might have noticed the problem with them — babies keep dropping them on the floor. And once they’re on the floor, you either apply the five-second rule — something that’s not advisable for your newborn — or you sanitise it, only to see it drop again and again. 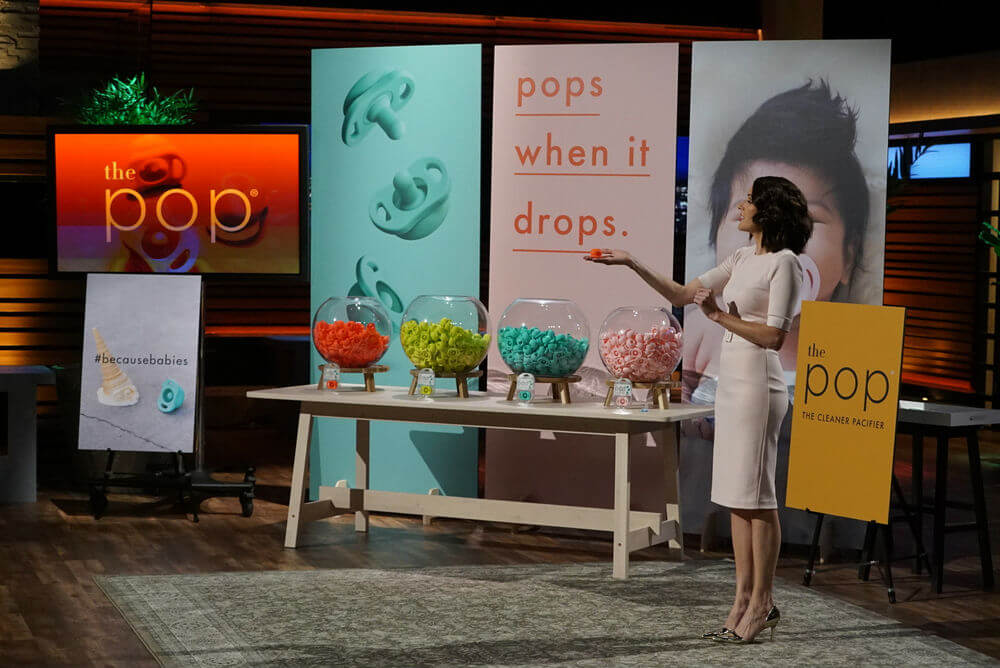 Nicki Radzely has come to parents’ rescue with a Startup having the ultimate pacifier — The Pop. Every time the pacifier falls on the floor, the nipple pops back into a protective covering. The product was launched four months ago and is currently available for babies who are up to six months old. Nicki is planning to launch a version for other age groups soon.

Nicki was seeking $250k for a 5% stake in Shark Tank. The Pop was fully funded on kickstarter, after which the product design was finalised and patented after multiple iterations. Four months since the launch, 25,000 pops have been sold.

Daymond John thought the valuation was too steep and took no time to bow out of the bids. Kevin made an offer of $250k for 10%, the same valuation at which the company raised money the last time.

Sara and Lori Greiner made a combined bid for 20% for their compatibility with the business and the value they could bring in right from word go. To everyone’s surprise, Nicki went with Mr Wonderful — Kevin — as she did not want to give away double the equity for the same amount of cash.

For all car geeks and motorheads out there, one constant pain point is cleaning their rides. We mean really getting all the muck and dirt off the tires and places where a normal brush can’t reach. And even if you have the right brush, the low-powered garden hose just does not do the trick.

To get around this problem, adventure-crazy buddies Kevin Williams and Glenn Archer came up with a Startup- Brush Hero. Brush Hero is a simple water-powered brush which cleans with amazing force without requiring any batteries. It still puts out amazing torque, which helps the brush to keep cleaning even when jammed into tight corners. Although designed for bikes and cars, one can use Brush Hero on rain gutters, BBQ grills, patio furniture etc. Brush Hero was pitching for $500k for a 10% stake on Shark Tank Season 9. 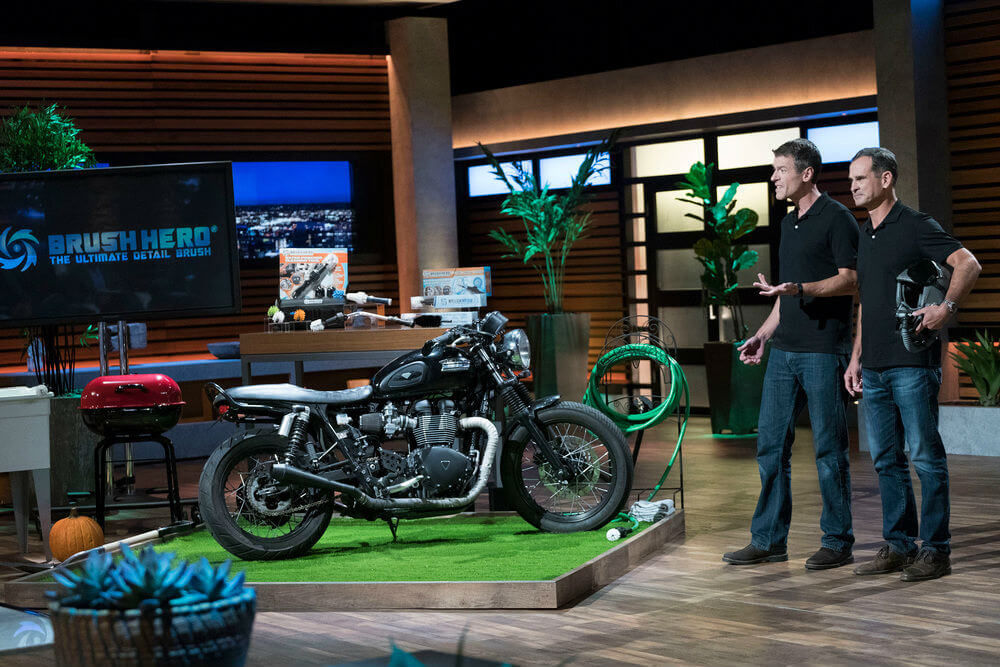 The Sharks got a feel of the product and it was time to get to the numbers. The company had done $3 Mn in sales, netting a little over $400k. All the Sharks found the valuation to be too steep, but Kevin was confident of his projection of $10 Mn in sales in the coming year.

Lori made an offer for 25% for the money asked for. The founders decided to step out of the tank to take a minute to discuss the offer. As we’ve seen before, this move hardly ever works in founders’ favour as it gives the Sharks time to rethink their offers. Robert Herjavec pointed out that there are similar products out there, which made Lori revise the offer and include debt in the mix. To everyone’s surprise, Kevin and Glenn declined the offer.

Disha Shidham is all of 20 years old and is on her second attempt at making it in the world of entrepreneurship. She is now a year into launching her Startup-Savy, a platform that lets customers bid for the ideal price at which they would want to buy a particular product. She was on Shark Tank Season 9 pitching for $100k for 10% in Savy.

Savy is based on the premise that a lot of potential sales are lost in the online space because of lack of real-time conversation between the buyer and the seller. If only customers could bid for products at a price they wanted to pay and suppliers could see such bids and take a decision, most products would see a considerable jump in sales explained Disha. 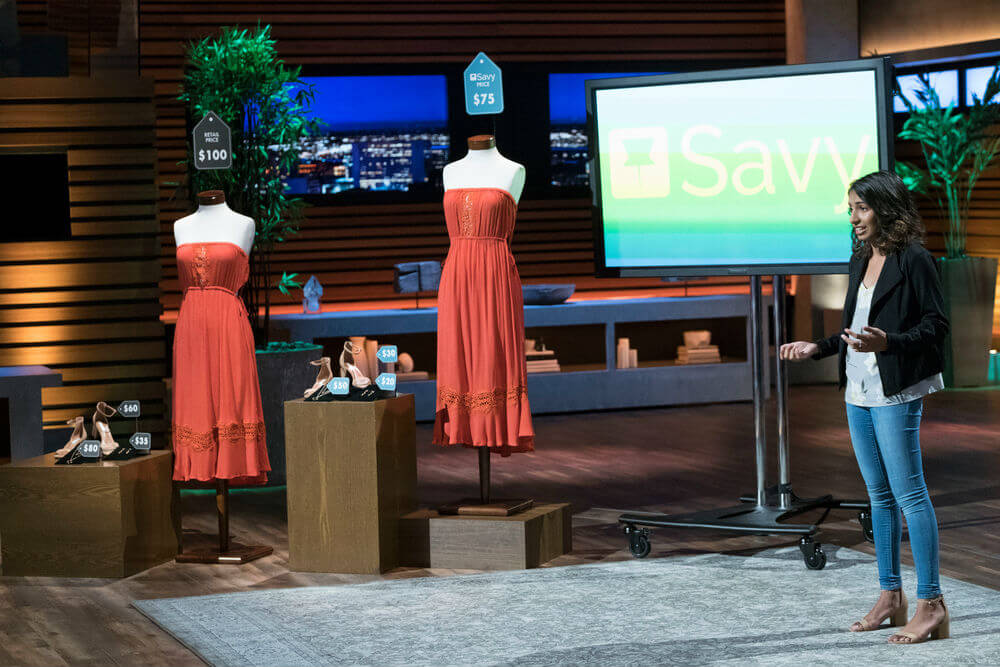 But from here on, the story went sideways. The Startup, Savy, hadn’t actually done any sales and the million-dollar valuation Disha quotes was based on verbal commitments. Disha had a hard time being coherent about what she had done before Savy and the fact that she wanted to defer college did not go down well with the Sharks.

Disha got a reality check on why she did not seem ready yet to take on the mantle of building a long-term business, and all the Sharks refused to fund Savy. The young founder left the tank fuming.

How often do you see Sharks on the bargaining side in Shark Tank? Not very often, we’d think. Well, this is just what happened when Ondrea and Marquez Fernandez from The Dough Bar showcased their product, seeking an investment of $300k for a 15% stake.

In what turned out to be an edgy pitch, the Sharks vied with each other, each one trying really hard to get a bite of The Dough Bar — even literally!

Startup-The Dough Bar makes healthy doughnuts for people wanting to look good yet eat delicious. The Dough Bar doughnuts are baked, macro-friendly and nutritionally balanced. And they are delivered plain with original, homemade toppings and glaze on the side, which allows customers to customise their Dough Bar experience. 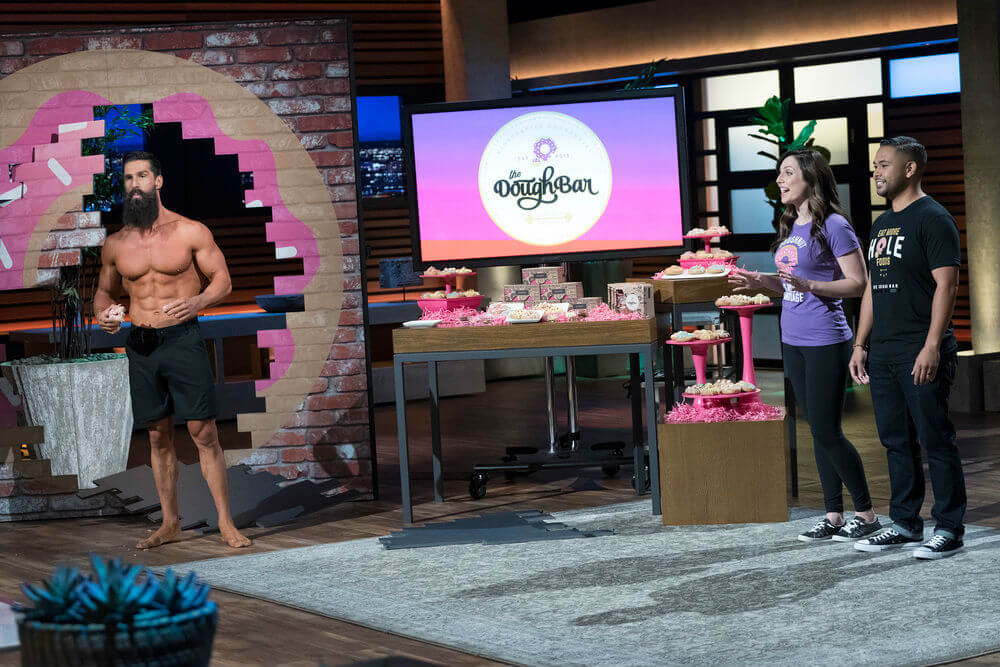 The founders exemplified the experience by getting a, extremely fit male-model on the show and getting him to eat as many doughnuts as he wanted, but still looking the way he did.

Ondrea and Marquez had impressive sales of $1.25 Mn over two years to back them and were projecting a $4Mn sale in the next year owing to the great marketing of an equally great product.

The Sharks were silent after the pitch, which meant they all wanted a bite of the doughnut. Barbara Corcoran was quick to put her deal out there at a 30% equity for a $300k investment. Lori offered the same investment at 25%; Mark Cuban and Robert opted out and that left Alex Rodriguez. Alex made a joint offer to the couple for $400k at a 30% stake, only he wanted Lori to join him as the partner on this. Lori happily agreed to this.

Ondrea and Marquez were discussing the matter when Barbara told them how she was the right choice for them and not Lori and Alex; she also dropped her stake demand by 5%. Lori immediately dropped her stake a little lower, which Alex countered. Ultimately Ondrea and Marquez asked Barbara to go down to 20%, which she agreed to, not only because she loved the business but also to prove a point to the other Sharks. Now that’s being quite the Shark, isn’t it!

Barely out of his teens, 19-year-old Martin Dimitrov owner of the Startup SnapClips was one of the smartest entrepreneurs on the tank. He was pitching for $150k at a 15% stake. He knew his product, he had it patented, and was solving a very basic yet annoying problem gym-goers face of quickly fastening weights on barbells. Now, for everyone who is a fan of Crossfit WoDs knows how important it is to quickly load the bar so you swing in as many reps as possible in the fast-moving AMRAP. Martin’s weight collar SnapClips not only solves this problem but also enables people to secure anything they need to have a sturdy grip on — from garden hoses to industrial cables.

While Martin did not have impressive sales, the startup did manage to impress Lori Greiner. However, Lori asked for a 50% stake in the company for the $150k, which Martin was not happy about. Alex was next to join Lori. Mark made the deal simple by coming in as well but brought the total stake of the three Sharks to 30%. Martin had the deal at a slightly higher stake, but then again at 19, what more do you want than having the very best in the game as your business partners.