Banks Look To Cash On UPI Payments, Plans To Levy Charges On Transactions

Banks Look To Cash On UPI Payments, Plans To Levy Charges On Transactions HDFC To Levy Charges On UPI Transactions From July 10

In a latest development, in an email sent by private sector bank, HDFC to its customers has stated that “ UPI payments will be chargeable from 10th July onwards.” Other banks might follow suite based on their own discretion, regarding making the UPI transactions chargeable. 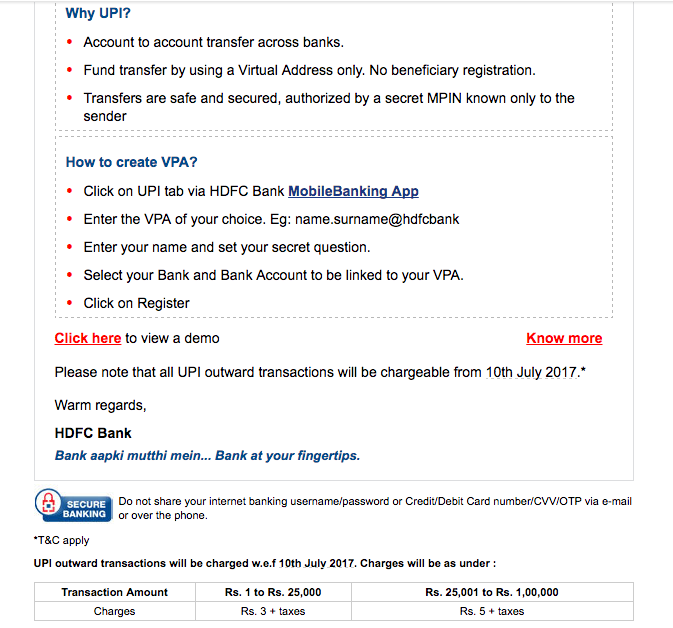 Commenting on the same, Dilip Asbe, Chief Operating Officer, NPCI told NDTV, “We have provided Unified Payments Interface platform to banks and other institutions for their customers. So far, no bank is charging for UPI payments but at the same time it is at their discretion to levy a reasonable fee towards Person to Person (P2P) transactions for UPI and IMPS. However, Person to Merchant (P2M) transactions in United Payments Interface will remain free to customers as per NPCI guidelines.”

In August 2016, the RBI in conjunction with the National Payments Corporation of India (NPCI), launched the United Payments Interface in India. The app was launched to help simplify peer-to-peer transactions. At that time, it was announced that UPI was adopted by 29 banks, 15 of which already have incorporated the app in their mobile-banking system. HDFC Bank, ICICI Bank, Axis Bank and a few others were among the notable financial institutions to integrate UPI early on.

UPI is a one-touch transaction for transferring money between any two parties using a ‘unique virtual address’ on a smartphone. Once a beneficiary is added to the address, an MPIN ensures transaction within seconds. The move on government’s part was to boost digitisation in the country.

The UPI payments follows the IMPS (Immediate Payment Service) structure of payments. IMPS transactions allow real-time 24×7 transfer of money between parties with the use of IFSC codes and MMID.

The launch followed adoption of United Payments Interface by various banks and other private fintech companies. Users were able to pay bills and facilitate digital payments via the same, without additional charges. This move on the bank’s part might bring in hesitation from the user’s end regarding UPI adoptions, on paying additional transaction charges.

In the last year, several startups launched their mobile apps based on UPI such as Trupay, Razorpay and Flipkart-owned wallet PhonePe. In March 2016, FreeCharge introduced a ‘Chat and Pay’ service that would enable social payments. In October 2016, MobiKwik partnered with ICICI to facilitate payments via UPI. In February 2017, the NPCI launched Bharat QR Code – a quick response code – in association with Visa and MasterCard, to facilitate digital transactions among consumers.

In March 2017, Sweden-based Truecaller, which counts India as its largest market, also introduced a new UPI-based mobile payment service ‘Truecaller Pay’ through a tie-in with ICICI Bank. Earlier in March, RBI also decided to open up Unified Payment Interface for digital wallets such as Paytm and Mobikwik.

[This development was reported by NDTV.]