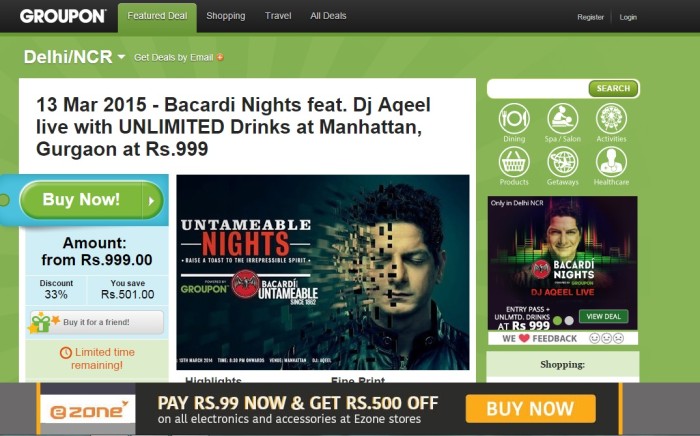 In a bid to further expand its business in asian market, Daily deals site and ecommerce platform, Groupon India has raised $20 Mn in funding from venture capital firm Sequoia Capital, says multiple reports. The move aims to make Groupon India, more autonomous from its parent company in the US.

The deal has already been announced to the company’s senior staff, but is yet to be public. The company has also signalled to to go for another round of funding in 2016. Groupon India’s CEO Ankur Warikoo and Sequoia have declined to comment on this development.

According to the media reports, Groupon has already made clear that it plans an aggressive expansion in Asia. Recently, the company was also in news for selling out it stake in Ticket Monster. Groupon bought Ticket Monster from rival LivingSocial Inc about a year ago for $260 Mn.

Groupon India was formed as a result of the acquisition of Indian-born SoSasta in February 2011. Since its inception, the company has not been able to successfully break into the field. While companies like Flipkart and Snapdeal continue to raise billions, it has been largely struggling to break into mainstream ecommerce space.

In 2015 so far, Sequoia-led deals have accounted for 12% of all Indian startup venture rounds and 33% of capital raised by those startups in 2015. The venture capital firm targets sectors like Energy, Enterprise, Financial, Healthcare, Internet, Mobile and has presence in China, India, Israel, United States region.