There Should Be A Code Of Conduct Similar To What Print And TV News Have, To Help Consumers Segregate Online News With Views, Avers Irani 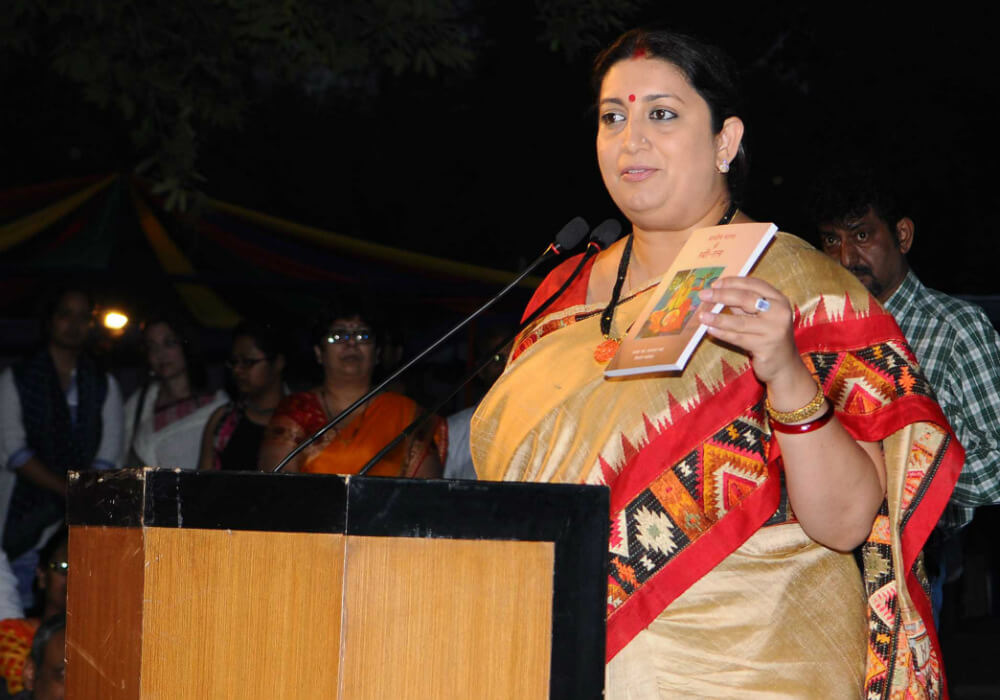 In line with the presence of legislative authorities such as the Press Council of India (PCI) for newspapers and the News Broadcasters Association (NBA) for television news, the Union Cabinet Minister of Textiles and Information & Broadcasting, Smriti Irani, has averred that there needs to have a similar agency for the online news, social media and overall online ecosystem.

She reasoned that such a step is essential since the legislation in terms of online news and the broadcast material is not very clear.

Speaking at an event, Smriti Zubin Irani stated, “For television and print content, we have already a code of conduct in place under the law. But, online is an ecosystem where legislation in terms of news and legislation in terms of broadcast content material is not very clear. That is something the ministry is currently undertaking in conversation with the various stakeholders.”

PM Modi, at his WEF Summit Davos keynote address, has already claimed that data and AI will be the next most crucial resources for countries. Speaking on the availability of pure information today, Irani opined, “News today is encapsulated with views. It is not devoid of views. That is the fine line that certain media journalists tend to cross. So, now it is incumbent upon the consumers to have the knowledge of what is pure information and what comes as an opinion.”

“This is something the ministry is considering to classify similar to what is reflected in broadcasting and advertorials. Having a similar line of ethics and code of conduct has to be put in place which is incumbent upon the agencies to abide by, to ensure that the customers do not get affected by the vested views in news, broadcasting and advertorial content,” added Irani.

So, which authority will be tasked with the responsibility?

Responding to that, Smriti Irani stated, “We have the Press Council of India for newspapers which is different from the government, still self-regulatory enough to awaken its own conscience and take a decision that will bar such processes. Similarly, for television news, you have the News Broadcasters Association. I’m hopeful that such a similar body will also emerge for the social media at least in the online news, opinion and entertainment content.”

Seconding Smriti Irani, Prasoon Joshi, CBFC Chief stated, “Calling someone a fringe element is relative. Even us, sitting in this five-star hotel, could be termed fringe by many. What we need to understand is that these ‘fringe’ voices are not new but were always there, what’s new is that the platform that social media provides everyone with.”

However, Prasoon asserted that the society at large corrects itself and it will ultimately emerge as a winner in this ongoing campaign of fake news and abuse problem spreading over the social media.

The ministry has recently merged three departments ‘to do away with such silos’. Irani informed that the Directorate of Film Publicity (DFP), Song and Drama Division (S&DD) and the Directorate of Audio Visual Publicity (DAVP) is now operating under the banner of Bureau of Outreach Communication (BOC) as per the new structure.

As per Irani, “The BOC – a framework designed to ensure the government’s engagement –  reaches every state and every district of the country; a reformative step in taking the government communication beyond the national capital.”

Fake news, particularly as online news, has become a headache lately for people across the world. Recently, The New York Times in an investigative report, stated how Donald Trump consultants exploited the Facebook data of millions during his presidency. The American federal investigative agencies have also filed a report on how Russia influenced the American social media to garner support for Trump during America’s presidential election in 2016.

Lately, various researchers have pointed out how fake news, abuse and misogyny are fast increasing and circulated on social media. Media organisations like the BBC and The Guardian have established teams to check facts on their publishing platforms delaying the publishing of news by sometimes even a day until the contents get verified. The same is not being practised by media at large. And WhatsApp, Facebook and Twitter have become a major media in spreading lies, biases and fake news which even affect the Court’s decision and government’s policy frameworks worldwide.

In post-truth times, times of alternative facts, any effort by Smriti Irani to segregate information from lies and fake news must be welcomed.