How is Google helping the voters of India and Indonesia for the upcoming elections?

How is Google helping the voters of India and Indonesia for the upcoming elections? 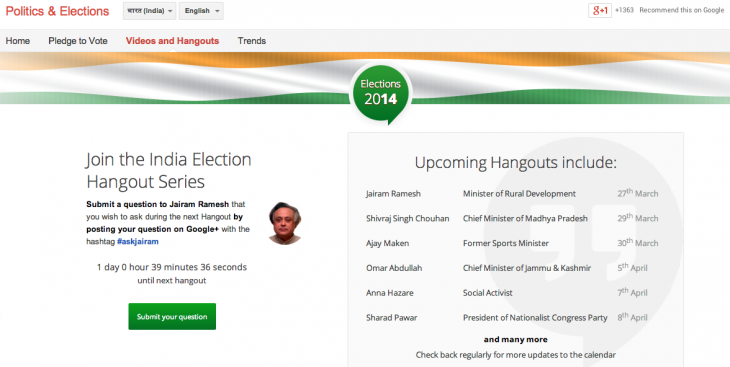 Google India recently announced that it has launched a new Elections hub, a series of election tools in an attempt to help the 600 million voters make the right choice. It’s already a known fact that 12 crore first-time voters hold key to 2014 Lok Sabha polls.

Sandeep Menon, Director Marketing at Google India, made the announcement in a blog post on Wednesday, saying the India election hub is now live for anyone to visit.

With Internet users increasing tremendously over past few years, it has become one of the major sources for information, communication and feedback for the people of the country. Google precisely uses this fact to help the people choose likeminded leader.

So what’s in the Election Hub and how can one use it?

As a part of the campaign Google made a beautiful video with Mr. Shyam Saran Negi, India’s first Independent voter.

Google Plans to boost this campaign with the of celebrity pledge, where actors like Amitabh Bachchan, Dia Mirza, Arjun Rampal and Sakshi Tanwar appear in a YouTube video to give their reasons for voting.

Given the fact that the majority of the population still doesn’t have a computer, Google has a plan B for this. People can call 08800484848 to listen in on Hangouts.

This initiative deserves a great praise for gathering a large amount of information around the elections in one place to help the people make the right choice and build a better nation. Hats off Google! You really know how to use technology for pushing the human race forward.