In a Google blog post, the company wrote that now, when you search for “jobs near me”, “jobs for freshers”, or similar job-seeking queries, you’ll see in-depth results that allow you to explore relevant job opportunities from across the web.

“We’re working with a number of organisations from across the industry to bring you the most comprehensive listing of jobs — including Aasaanjobs, Freshersworld, Headhonchos, IBM Talent Management Solutions, LinkedIn, Quezx, QuikrJobs, Shine.com, T-Jobs, TimesJobs and Wisdomjobs,” added the blog post.

This essentially means that a user will see job postings relevant to him or her from multiple sites, including others from company websites through open documentation.

The post claims that at present, Job search on Google has over a million listings across job types and industries from over 90K employers in the country.

Some of the features listed for job search are:

The new jobs search experience will be available in English on the Search app on Android and iOS, in Google search on the desktop and mobile. 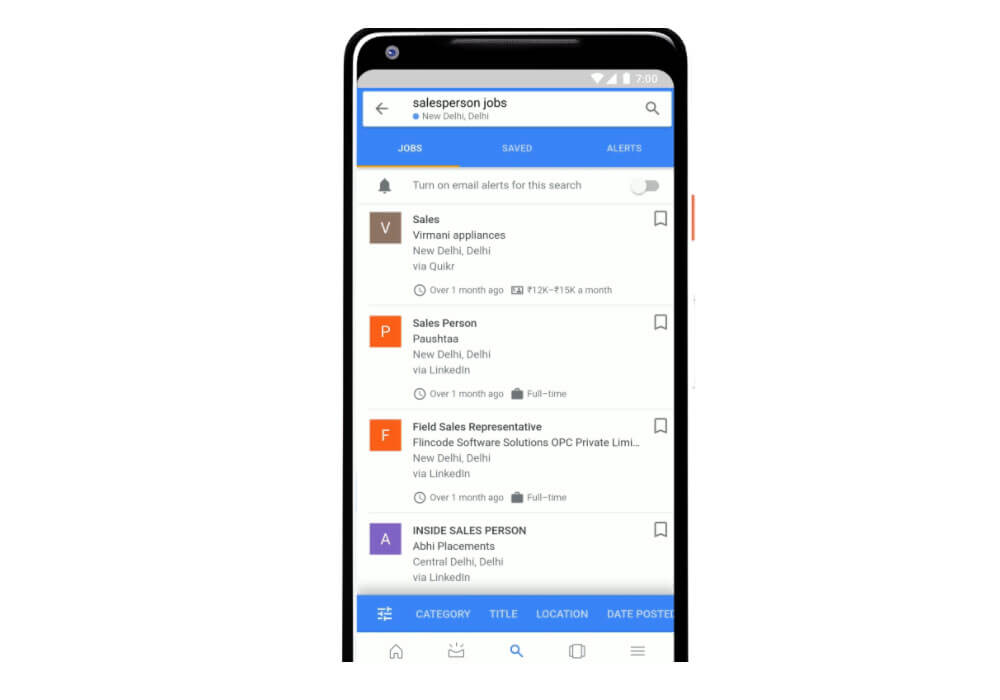 Google believes that with 51 Mn Indian SMBs creating over 110 Mn jobs annually, they now have the ability to surface their jobs contextually and to a large pool of relevant job seekers.

Google: Aggressively Spreading Its Footprint In India In Different Verticals

Home Mini has far-field mics “so it can hear you even when there’s music playing or loud noise in the background: with its circular design, it can project 360-degree sound, with just one speaker”. Using neural beamforming, the company has “simulated hundreds of thousands of noisy environments and applied machine learning to recognise patterns that allow us to filter and separate speech from noise”.

Apart from this, the company’s most successful bid in India is its digital payments platform, Google Tez. In an industry where digital payments are expected to touch $1 Tn by 2023, Tez has been considered a major contributor to the growth of UPI in India.

It also partnered with Airtel to bring low-cost smartphones powered by Google’s Android Oreo (Go edition) to the Indian market.

Some of the products built specifically for India are YouTube Go, the Google Assistant in Hindi for Allo, faster browsing for Google Play on 2G connections, as well as new, global platforms inspired by the needs of Indian users such as the Station WiFi platform and new data-saving features in Chrome for mobile.

However, Google recently filed an appeal in the National Company Law Appellate Tribunal (NCLAT) against the CCI (Competition Commission of India) order which charged $21 Mn (INR 136 Cr) fine on Google for conducting unfair business practices in India for online search. However, the tribunal has now reserved its order.

With the focus on the Indian market, Google isn’t the only global giant expanding and experimenting its portfolio in India.

Also, in February 2018, Amazon announced the commercial availability of Echo Dot, Echo and Echo Plus in India. Echo devices are voice-controlled speakers designed entirely around the speaker’s voice. The company claims that they are hands-free and fast. Alexa is the brain behind Echo devices.

At the same time, in the hyperlocal space, it competes with Amazon as well as Uber. In April 2017, Google introduced Areo, its food delivery and home services app.

Soon after, Uber announced the launch of its food delivery app UberEATS, while Amazon has been continuously expanding its food retail and hyperlocal grocery delivery through Amazon Now.

As the global giant continues its expansion and focus on India, the job search feature is bound to come in handy for those 63% people who are slated to access job postings online in India by 2020, as per a report by Google-KPMG.