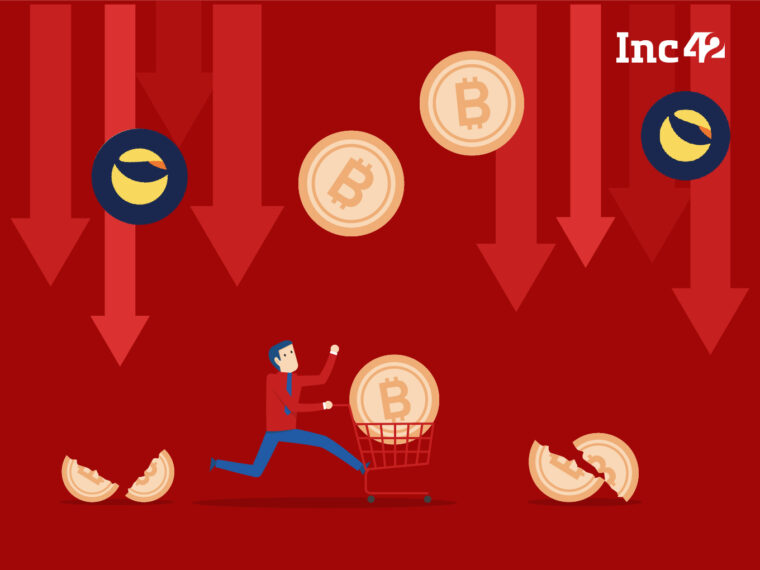 Along with the crash in TerraUSD and Luna, Bitcoin also fell below the $30,000 mark for the first time since July 2021

Bitcoin prices recovered later, but it is still hovering around the $30,000 mark

The cryptocurrency market is going through testing times in the past few weeks due to several factors. As cryptocurrency prices keep sliding for more than a month now, Bitcoin also fell below the $30,000 mark last week for the first time since July 2021. While Bitcoin prices recovered later, it is still hovering around the $30,000 mark and sometimes dropping below the mark. Moreover, the collapse of stablecoin TerraUSD (UST) and its sister token Luna has also added fuel to the crisis.

The last two months were already difficult for the crypto industry in India with new tax rules and payment mechanism issues. The global crypto crash has only added to the woes.

Major Indian crypto exchanges such as WazirX and CoinDCX, which saw a decline in their trading volumes in April due to new tax on virtual digital assets and issues with payment methods, have been further hit by the crypto crash. WazirX’s trading volume declined 42% between May 13-17, while crypto exchange CoinDCX saw its volume dropping by 61% during the same period. 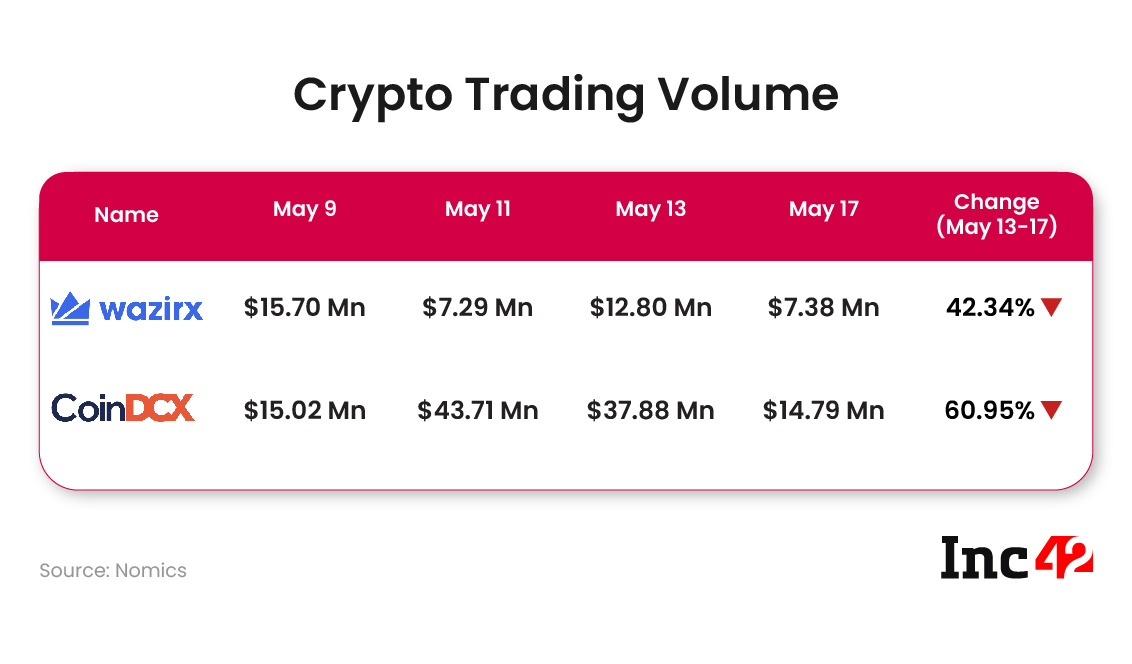 The decline in prices started when $2 Bn in UST was extracted at once from Anchor, a decentralised finance (DeFi) protocol based on the Terra network. As investors rushed to pull their money out, the prices of UST and Luna started going down. At one point, both the stablecoins almost lost 100% of their values, wiping out all of investors’ money. Currently, UST is trading at a price of $0.1243, according to Coinmarketcap data.

Stablecoins are a type of cryptocurrencies whose value is tied to another currency. The value is mostly pegged at $1, matching the real-world asset. The price of UST and Luna falling below $1 has raised questions about the validity of the concept of stablecoins, which are supposed to be more stable compared to other volatile crypto assets such as Bitcoin. After Terra’s fall, another stablecoin, Tether, briefly lost its $1 peg but recovered later.

Following the crash of Luna and UST, Indian exchanges delisted the tokens from their platforms last Friday. Major Indian cryptocurrency exchanges, including WazirX, CoinSwitch Kuber and CoinDCX, have delisted stablecoins.

Meanwhile, the Luna Foundation Guard (LFG), the non-profit organisation that supports the Terra ecosystem, announced on Monday its plans to compensate the remaining users of UST, starting with the smallest holders. “The significant dip that is being witnessed in crypto is a global phenomenon. It can be primarily attributed to developments in the macro environment such as increasing inflation, raising of interest rates by the Federal Reserve, the Russia-Ukraine war, etc,” Nischal Shetty, cofounder and CEO of WazirX, said. 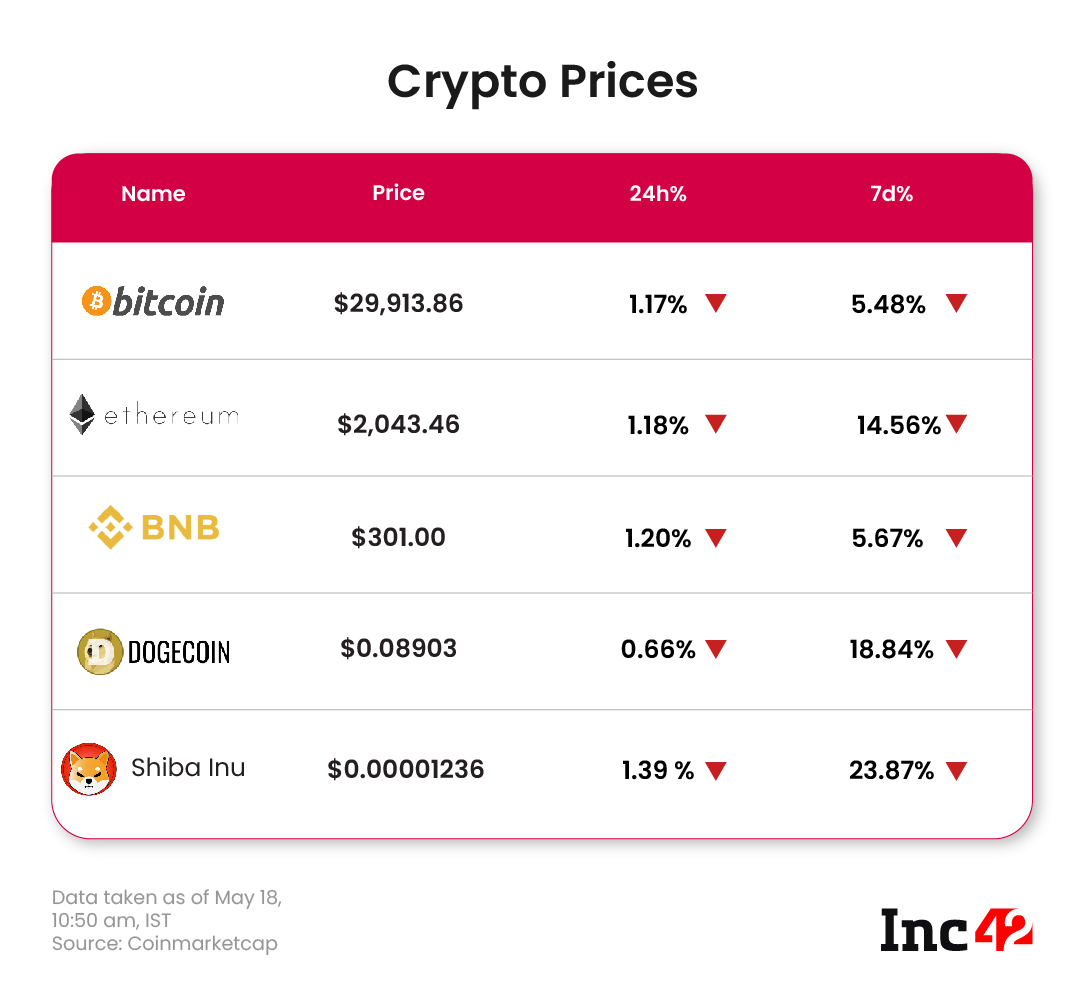 While the crypto market has already been under the scanner of regulators across the world, the recent crisis has raised more questions. It could be more difficult for India’s crypto industry as the Reserve Bank of India (RBI) has taken a negative stance on cryptos.

Recently, top officials from the Reserve Bank of India (RBI) reportedly told a parliamentary panel that cryptocurrency can lead to the ‘dollarisation’ of a part of India’s economy, which can hurt the country’s sovereign interest.

“No doubt that when the market is in a bear mode, exchange volume will be impacted. However, this time, the outright erosion of Luna has a larger impact. The industry was trying hard to convince the regulators about the need to regulate the cryptocurrency industry. Near-zero wipeout of Luna has put a large dent on this effort,” Praveen Kumar, founder and CEO of Belfrics Group, said.

However, he also expressed hope that the investors would regain the confidence in the digital assets after the market stabilises.

“Naturally, with such a steep fall, investors will play more cautiously. Once the market stabilises, the investors will clock back to add digital assets,” Kumar said.