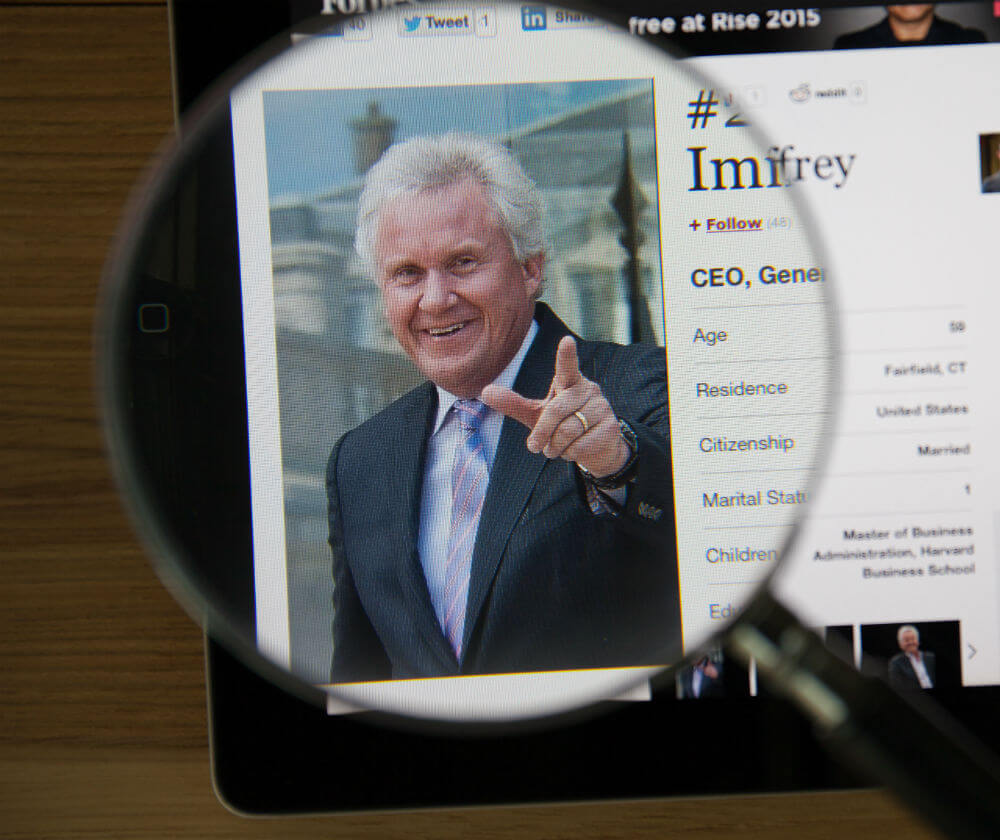 Jeff Immelt ran GE for 16 years. He radically transformed the company from a classic conglomerate that did everything to one that focused on its core industrial businesses. He sold off slower-growth, low-tech, and nonindustrial businesses — financial services, media, entertainment, plastics, and appliances. He doubled GE’s investment in R&D.

In his Harvard Business Review article summing up his tenure, Immelt recalls that the two things that influenced him most were Marc Andreessen’s 2011 Wall Street Journal article “Why Software Is Eating the World,” and Eric Ries’s book The Lean Startup.

Andreessen’s article helped accelerate the company’s digital transformation. GE made a $4 billion bet on connecting industrial equipment via the Internet of Things (IoT) and analytical software with a suite of products called the “Predix Cloud”.

Over a period of years, every GE senior manager would learn the Lean Startup, and GE would be the showcase for how modern companies use entrepreneurial management to transform culture and drive long-term growth.

Innovation at GE was on a roll.

In June 2017, the board “retired” Jeff Immelt and promoted John Flannery to CEO. Since then Flannery has replaced Immelt’s vice chairs responsible for innovation. Beth Comstock is out. So is John Rice, the head of Global Operations along with CFO Jeffrey Bornstein.

Last week’s Wall Street Journal story on GE opened with, “John Flannery, the leader of General Electric for just 2½ months, has already begun dismantling the legacy of his predecessor…” Flannery has pledged to unload $20 billion of GE businesses in the next two years. “We need to make some major changes with urgency and a depth of purpose. Everything is on the table,” Flannery said on a conference call to discuss quarterly earnings. “Things will not stay the same at GE.”

Instead of lean innovation programs, there is a mandate to cut $2 billion in expenses by the end of next year, lift profits and raise the dividend.

So what happened? Are lean innovation and the Startup Way a failure in large companies?

In fact, what happened is activist investors.

During Jeff Immelt’s tenure GE’s stock-market value fell by about half. Its stock is trading where it was 20 years ago. So far in 2017, GE is the worst performing stock on the Dow Jones Industrial average.

In 2015 Trian Partners, an activist investor, bought $2.5 billion of GE stock – about 1.5% of the company. The firm wrote a white paper, “Transformation Underway… But Nobody Cares” which essentially said that GE stock was undervalued because investors didn’t believe that Immelt and GE management would do the things needed to deliver a higher stock price and dividends.

Trian was pretty clear about what they thought the company should do:

Immelt believed that doing these three things would optimize the stock price and increase the value of Trian’s investment, but the debt and cuts would endanger GE’s long-term investment in innovation.

And now Immelt is now the ex-CEO, and Trian Partners just a got a seat on the GE board.

The “corporate raiders” of the 20th century have rebranded themselves as “activist investors” of the 21st. With refrains of “unlock hidden value” and “increase shareholder value,” and powered by over $120 billion in assets, activist investors like Trian look for companies like GE (or Procter and Gamble) that have a share price which is underperforming relative to its peers (or those with large amounts of cash on their balance sheets). They then buy stock in these public companies and attempt to convince management to increase the price of the shares.

One key difference in 21st century activists is that they don’t need to buy much of the company’s stock to gain control. (Trian only owns ~1.5% of the GE and P&G shares). They do it by influencing the votes of the majority of the shareholders. And in the 21st century, the majority of public company shareholders are institutional investors (banks, insurance companies, pensions, hedge funds, REITs, investment advisors, endowments, and mutual funds), not individuals. (In 2015, the 10 largest shareholders in a typical S&P 500 company held almost half of the company’s stock.)  What gives institution, even more, say is that while individual shareholders vote their shares 30% of the time, institutions vote their shares 90%. (In the case of P&G, 40% of its stock was owned by small investors, helping the company fight off a 2017 proxy battle with Trian.)

After the dot.com crash in 2001 and the financial crisis of 2008, traditional investors who previously held their shares for the long-term — public pension funds, institutional investors and money managers — are now more interested in short-term gains. This means that company boards who used to side with management no longer automatically protect them, and as Jeff Immelt discovered, may even side with an activist.

Activist investors have a simple goal: increase the value of their investment. But first, they need to get management of a company to change their existing strategy. To do that, they start with an implicit (GE) or explicit (P&G) threat of a proxy fight for a seat on the company board.  Next, they make a public presentation to management — like Trian’s “Transformation Underway… But Nobody Cares” — explaining what actions they think the company should take to increase the price of the stock.  Next, they use the financial press and blogs to spread their message to the institutional investors. If that still doesn’t work, they can start a proxy fight and try to gain control of shareholder votes so they can replace the board — and ultimately the company management.

If their campaign is successful, like Trian’s was at GE, they’ll have a seat on the board and a new CEO and management. They’ll have GE execute a playbook to increase the value of their investment: share repurchase programs, increased dividends, and, to reduce expenses, layoffs, factory closings, spin-offs of profitable parts of the company, sell-offs of the least profitable divisions, and asset stripping. And as Trian’s presentation suggests, they’ll get GE to take on more debt to buy back stock. And often they calculate that selling the sum of parts is greater than keeping the company together as a whole. Or they may even put the entire company up for sale.

There is an upside to an activist investor taking a run at a company. It’s often a cattle prod to a stagnant company, or one ignoring disruption by new startups. GE’s gross margin was 21% last year, compared with 28% at United Technologies and 30% at Siemens. At a minimum, as is happening to GE now, it forces a company to go through a review of its strategy. (At GE the biggest problem in 2017 was major revenue misses in their Power business.) The new GE CEO is focusing on a back-to-basics approach to the business: dramatically reducing expenses, with the visible symbols of getting rid of company planes, company cars, and delaying a fancy new headquarters, etc.

A CEO of a public company needs to know what explicit and implicit guidance they are getting from their board and institutional investors.

Large public companies like Amazon, Tesla, Netflix, etc. capture the imagination of investors and can focus on revenue and user growth instead of on the bottom line. Almost 20 years after Amazon was launched, it has massive revenue growth and barely has a meaningful profit. Investors in these companies believe that the company’s investments in user growth will result in long-term profits. (Newly public tech companies are now going public with dual-class stock, which allows the founders to have more voting rights than the general public. This protects them from activist investors and allows them to put long-term interests ahead of quarterly results.)

But GE’s core businesses don’t have the scale of those online businesses. No innovation program, lean or otherwise, would have helped the dismal performance of their Power segment.

In hindsight, GE Fastworks wasn’t the problem at GE, and while the Predix Cloud has had a painful birth, GE’s investment in the industrial Internet of Things (IoT) and lean will pay off in the future. But the impact of future innovations couldn’t compensate for poor execution in its traditional businesses. GE’s board was not happy with their margins, stock price, and how Wall Street viewed the future of the company. The immediate threat of a proxy fight with an activist investor forced a decision on the future direction of the company.