Rebel Foods has raised $50 Mn in Series E funding round 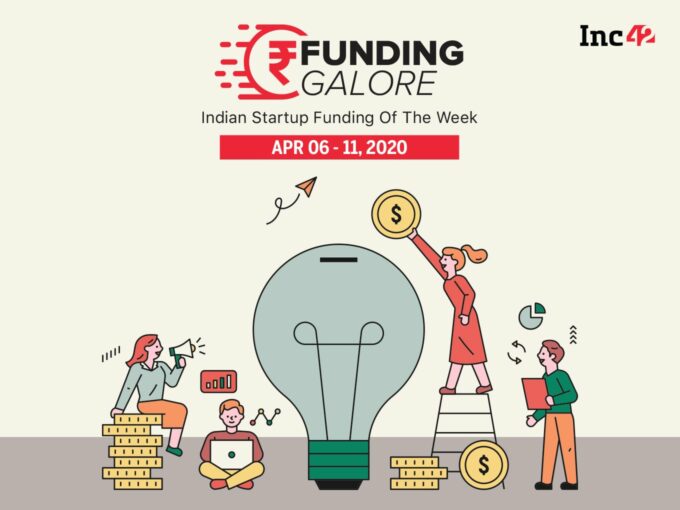 In one of the biggest funding round this week, Bengaluru-based online grocery delivery platform BigBasket has raised $60 Mn from existing investor Alibaba in its latest funding round to meet the upsurge in demand for essential products amid lockdown. The corpus has come in a bridge funding round which will help the company to cover short-term expenses.

Overall, 20 startups raised around $312 Mn funding and one startup acquisition took place in the Indian startup ecosystem this week. (This funding report is based on startups that disclosed funding amount.)

Bengaluru-based food delivery major Swiggy has raised $43 Mn in its Series I funding round led by Chinese internet giant Tencent. Ark Impact Investments, Korea Investment Partners, and MACM India Growth Fund also participated in the round. “Our focus remains to execute on our vision while building a sustainable path to profitability,” said Rahul Bothra, CFO, Swiggy.

Gurugram-based financial services startup Aye Finance has raised $23.6 Mn (INR 180 Cr) in debt from several lenders in India and abroad. This comes at a time when the company is following RBI directive of three-month moratorium on term loans. The company is looking to use this fund to support the MSME segment and provide business loans to the underserved business sector during the time of this crisis.

Patna-based agritech startup DeHaat has raised $12 Mn in its Series A funding round led by venture capital firm Sequoia Capital India and Dutch development bank FMO. Existing investors Omnivore and AgFunder also participated in the funding round. With the raised funds, the startup plans to expand its reach to more than a million farmers by 2021.

Gurugram-based skill-based gaming startup Zupee has raised $8 Mn in its Series A funding round led by Matrix Partners India with the participation of Falcon Edge Capital, WestCap Group, Orios Venture Partners. Smile Group, an existing investors of Zupee, also participated in the round. Smile Group had invested $1 Mn in a seed funding round of Zupee. With the recent funding round, Zupee is planning to improve the technology component in its gaming product. The startup is also planning to hire more employees while keeping aside some funds for the marketing of the product as well.

Mumbai-based edtech startup Lido Learning has raised $7.5 Mn in its ongoing Series B funding round led by BAce Capital. Founder and CEO Sahil Sheth said that the company has closed Series B at $10.5 Mn funding with participation from existing investors. Sheth said that the funds will be used for scaling up existing infrastructure and hiring employees across functions as well as new teachers.

B2B healthtech startup Akna Medical has raised $7 Mn (INR 54 Cr) in a funding round from India-focussed impact investment arm of LGT Lightstone — LGT Lightstone Aspada. With this funding, Akna Medical is planning to invest over $20 Mn to scale up its operations across India within the next two years. The startup is also planning to enhance technology aisle and analytics offerings.

Chennai-based online financial marketplace BankBazaar has raised $3.8 Mn (INR 29 Cr) in an ongoing Series D round from Amazon and Walden SKT Venture Fund. Sequoia, GUS Holdings, and Eight Roads Investments have also participated in the round. Besides this, even BankBazaar’s top executives like founders Adhil Shetty and Arjun Shetty, CTO Murari Sridharan, the company’s chief delivery officer Iype Isac, and CFO Ramesh Srinivasan have made an investment in this round.

Former PayU India’s chief Jitendra Gupta’s Amica Technologies, the neobanking startup, has raised $2 Mn in a funding round led by venture capitals UK-based Hummingbird Ventures and US-based Bedrock Capital. With the funding, Gupta is planning to officially launch the neobanking operations for Jupiter in July.

Mumbai-based healthcare aggregator, HealthAssure, has raised top-up funding of $0.78 Mn (INR 5.54 Cr) from its existing investor Blume Ventures. According to the ministry of corporate affairs filings, HealthAssure has allotted 81,603 Series A preference shares at a nominal value of INR 100 with a premium of INR 574 to Blume Ventures.

Bengaluru-based two-wheeler rental platform Vogo has raised $400K Mn INR 3 Cr in Series C round of funding round. The company has received an addition of INR 3 Cr from Ramachandran Narayan of Gaja Capital and Exponentially I Mobility LLP.

Bengaluru-headquartered video-first talent marketplace Joynt has raised an undisclosed amount of funding from SOSV and its accelerator MOX. The Bengaluru-based family office Omphalos Ventures India also participated in the round. The company will use the funds to further acquire users and generate significant revenue for the talent community on Joynt.

Mumbai-based mobile interactive platform Plop has raised an undisclosed amount of funding from Better Capital and Hari Balasubramanian’s EaSyndicate on LetsVenture. Plop is planning to use this funding to on-board more content creators and broaden its content catalogue.