One of the biggest funding rounds this week was raised by Flipkart Internet, the online marketplace arm of Indian ecommerce company Flipkart which received more than $475.75 Mn 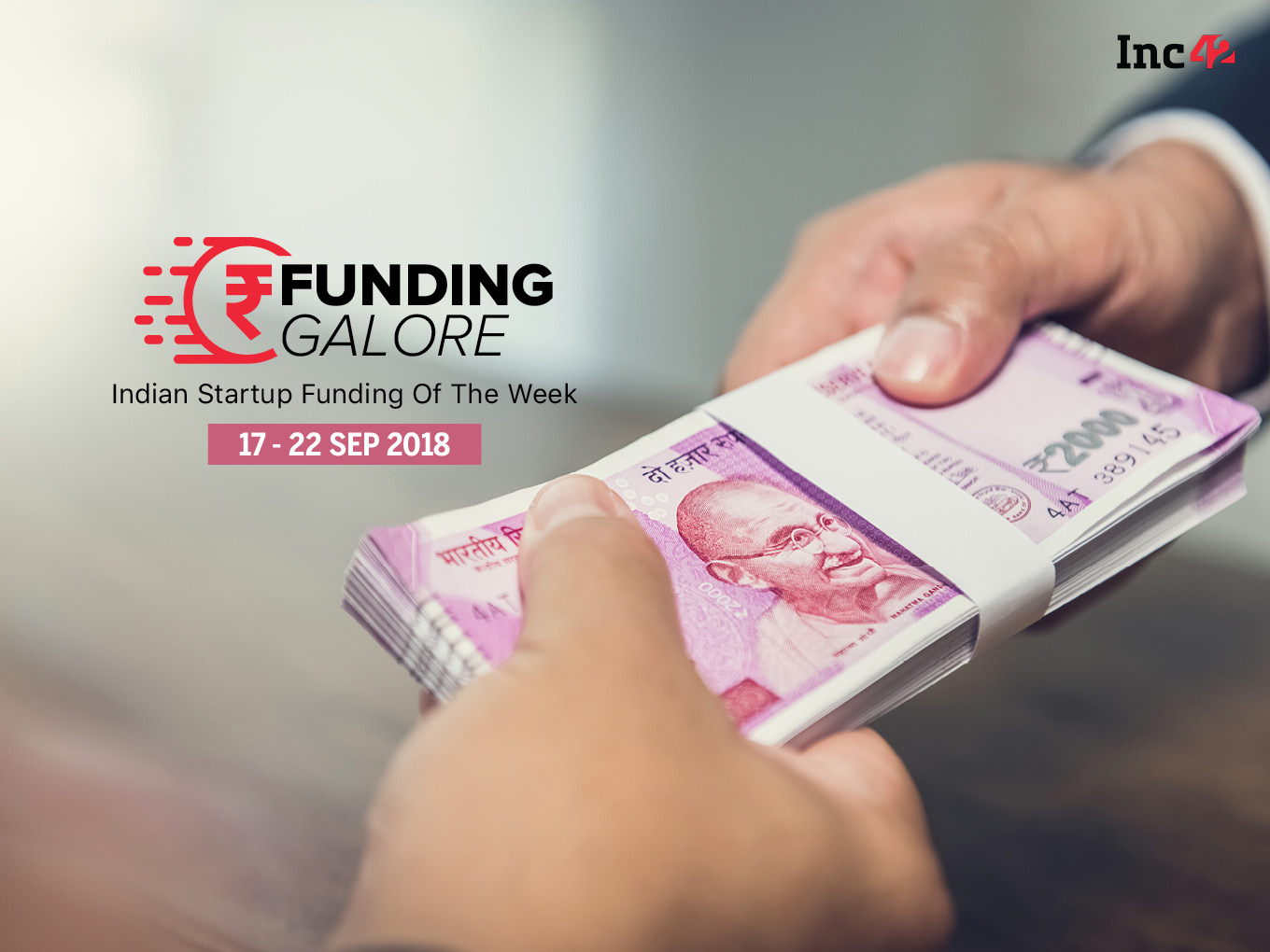 One of the biggest funding rounds this week was raised by Flipkart Internet, the online marketplace arm of Indian ecommerce company Flipkart, which received more than $475.75 Mn (INR 3,462 Cr) from Flipkart Marketplace, Singapore. The funding is expected to help Flipkart amp up its game against its arch-rival and global player Amazon. The company also plans to add more exclusive partnerships and expand its collection of globally recognised labels in the coming months.

Further, Bengaluru-based Indian regional language social platform ShareChat raised close to $100 Mn (INR 720 Cr) in a funding round that will boost its valuation to $460 Mn (INR 3,332 Cr). This is a 7x increase to its last valuation when the company raised $18.2 Mn in Series B funding round from Xiaomi Singapore and its sister company Shunwei Capital at a valuation of $67 Mn (INR 431 Cr) in January 2018.

Apart from these, this week 16 startups raised around $181 Mn funding and three startup acquisitions took place in the Indian startup ecosystem. (The startup funding calculations are based on the startups that disclosed funding amount.)

Livspace: End-to-end home design and decor service provider Livspace raised $70 Mn in a Series C funding round led by US-based private equity company  TPG Growth and global investment bank and active investor Goldman Sachs. The round also saw participation from Livspace’s existing investors — Jungle Ventures, Bessemer Venture Partners, and Helion Ventures. The startup plans to utilise the funds to expand its presence from seven cities to 13 by 2019. Avendus Capital was the exclusive financial advisor to Livspace for this transaction. With the new round, the startup’s total capital raised till date has reached $97.6 Mn.

Ola: Ola secured $50 Mn from two new investors – Hong Kong-based Sailing Capital and the China-Eurasian Economic Cooperation Fund (CEECF). The fundraising is part of the company’s effort to raise fresh funds of at least $1 Bn. the round has valued the company between $3.7 Bn and $4.3 Bn. The investments have been made through British Virgin Islands entities of two Chinese funds — Auto Fortune Ltd and Odyssey Bravery Ltd. Further, Sailing Capital and the CEECF, a state-backed investment fund of China, will hold a combined stake of about 1.17% in Ola.

DocPrime: DocPrime, the healthcare venture by Policybazaar Group received an initial internal funding of $50 Mn from the parent company. It aims to expand its network to 150K doctors and 20,000 labs across 100+ cities.

CleanseCar: Bengaluru-based daily car cleaning and standardised repair startup CleanseCar raised Seed funding from Dhianu Das, an Angel Investor and mentor for startups like Cleardekho, GoMechanic, swaytech, Nodd App.  The startup plans to use this fund to primarily expand its current operations and invest further in research/development to create qualitative, environmentally friendly options to car owners across the country. It also plans to expand to Chennai, Pune and Hyderabad followed by other cities in the coming months.

Xplorabox: New Delhi-based educational subscription activity box for children Xplorabox raised an undisclosed amount in a Seed funding round from Z Nations Lab, Sridham Enterprises and Metaform Ventures. The startup plans to use the funds to expand its services, including the launch of products to cater to higher age categories, diversifying into curriculum-mapped products, and tapping the overseas markets of North America and the Gulf Cooperation Council (GCC).

Mate Labs: Bengaluru-based AI-focussed startup Mate labs has raised $550K in a Seed funding round from lead investor Omphalos Ventures India LLP and other investors from around the world. Other notable investors include Eagle 10 Ventures (a group of serial entrepreneurs and industry veterans from around the globe), 91Springboard (Coworking community, India), Deepak Sharma (previously Chairman of CITI Bank, Global Private Banking, and present board member of 91Springboard), Khattar Holding Pte Ltd., Sumit Sinha (of Kristy’s Kitchen acquired by Cure Fit foods), and Tejan Timblo (Co-founder at Docuvity), among others. The start-up is currently focused on developing their SME and Enterprise business pipelines belonging to BFSI and Retail sectors.

Parkwheels: Gurugram-based RFID technology based smart parking system Parkwheels raised $166K (INR 1.2 Cr) in its seed round from 91springboard, Amit Lakhotia (ex-VP Paytm), Kuwait Based Investment firm and others. The round was finalised in April 2018. Their existing investors Anchit Lakhotya (ex – executive director of StanC) and Sonit Singh (ex – ED & Head – Real State Coverage, SCB) were also a part of this round. The funding will be primarily used to strengthen their technology and to serve their current order books.

Cyclops MedTech: Bengaluru-based Cyclops MedTech, a startup working on clinical and wearable diagnostic and rehab products for neuro-vestibular disorders using eye-tracking technology raised $1 Mn from Unitus Ventures. Existing investor C P Bothra, the Chief Operating Officer and Managing Director of Medreich India, also participated in the round. The startup plans to use the recently raised funds to augment its role as a leader in the neuro-vestibular diagnostic space and rapidly scale up its installations base in India and the rest of Asia.

NewsBytes: Gurugram-based digital news and media platform NewsBytes raised $1 Mn in a Pre-Series A funding round. The investment was led by Germany-based MM Inno GmbH, along with the US-based Powerhouse Ventures in participation with the existing investor Mumbai Angels. As a part of this deal, Peter Kabel, the Founding Partner of AECAL.de would also join the board of the startup. The funds will be utilised to expand its technology team, support its growing footprint, establish the Hindi and other vernacular desks, and venture into video based content.

Avenue11: Bengaluru-based O2O grocery company Avenue11 raised $3.59 Mn (INR 26 Cr) from Brand Capital, the strategic investment arm of the Times Group. The company will use the funding for the geographical expansion of the business and to increase its brand presence. With the fresh capital infusion, Avenue11 expects to achieve a GMV of $2.34 Mn (INR 17 Cr) in 2018.

Leena AI: US-based investor Y Combinator’s latest graduate, the HRTech startup Leena AI raised $2 Mn in a Seed funding round from a host of Silicon Valley investors among others. Elad Gil, FundersClub Fund, Quiet Capital, Kunal Bahl and Rohit Bansal and Cathexis Ventures along with a few other angel investors also participated in the funding round. The company plans to use the funds for product development and international expansion.

DailyNinja: Bengaluru-based milk and grocery delivery startup DailyNinja raised an undisclosed amount of funding from Mumbai-based venture capital firm Matrix Partners India. Existing investors including Bengaluru-based Sequoia India and Saama Capital also participated in this funding round. The startup will use the fresh funds for strengthening DailyNinja’s market leadership in the daily essentials space, by expanding to other cities beyond Bengaluru, Hyderabad and Chennai.

Togedr: Gurugram-based adventure and activities based experiences platform and community Togedr raised an undisclosed amount of funding from a group of US & UK-based startups. The investment was led by UK-based investor Anil Patel.  The US-based MAW Media and Nalini Singh also participated in this round of funding. The startup plans to use the funding for building better tech and APIs. It is also aiming to launch international hikes and corporate activities in South East Asia market, as well as expand its presence in Bengaluru and Goa.

Qbera: Bengaluru-based online lending platform Qbera has raised a $3 Mn funding round led by Mumbai-based investor E-City Ventures which The startup plans to utilise the recently raised funds towards ramping up its technology and analytics capabilities. It also plans to expand its team across functions, scale its business and expand its geographical reach to more parts of the country. is a part of the Indian conglomerate Essel Group.