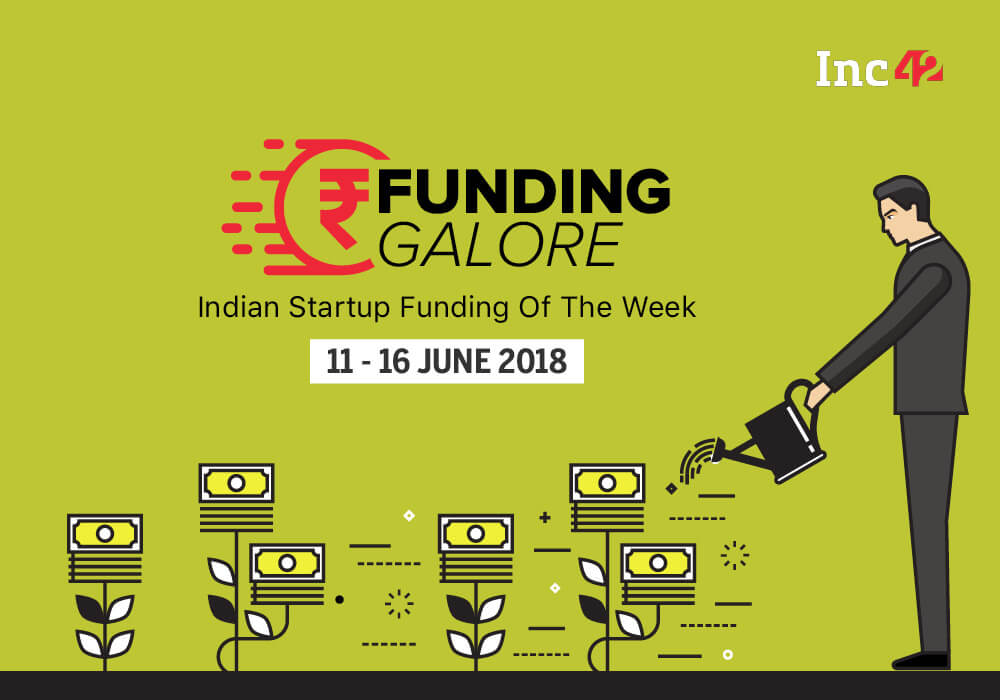 One of the biggest funding round this week in the Indian startup ecosystem was raised by the Gurugram-headquartered online lending startup Aye Finance. The company raised  $21.7 Mn in Series C funding led by CapitalG, the growth-stage investment arm of Google’s parent company Alphabet. With $11.9 Mn, this is CapitalG’s first bet in the Indian online lending sector. Aye Finance will use the funding to further increase its loan book, which stands at about $77 Mn (INR 525 Cr) and in building its technology platforms.

Also, Paytm Mall received $225 Mn as the last tranche of $445 Mn funding from SoftBank and Alibaba. SoftBank’s investment arm SB Investment Holdings invested $200 Mn while Alibaba put in $25 Mn in the ecommerce company. With this funding, SoftBank looks to take up a 21% stake in Paytm Mall, while Alibaba will hold 46%. The startup believes that online-to-offline retail is the way forward in India and aims to triple its offline presence by the end of 2019.

This week 14 startups in the Indian startup ecosystem raised around $285.3 Mn in funding altogether and one startup acquisitions took place. (The startup funding calculations are based on the startups that disclosed funding amount.)

Pixr8: The online business media platform based out of Ghaziabad raised $ 37K in seed funding. Pixr8 will use the fresh capital for expanding its customer base, acquiring readership and hiring new talent that could boost its market reach and business operations. The startup is focussed at the intersection of platforms, publishers and communities and the founder believe that the funding would come in handy towards a differentiated approach to efficiently scale into new markets.

Network Intelligence: Bengaluru-based cybersecurity services company Network Intelligence raised $4.87 Mn (INR 33 Cr) from private equity firm Helix Investments. The startup has been valued at more than $22.89 Mn (INR 155 Cr) for this funding round. The startup plans to utilise the funds for two purposes- expanding to the US and Europe markets and to enhance product development initiatives. Network Intelligence earns 60% its revenues from the BFSI sector and the rest from critical infrastructures like oil, gas and IT.

HomeLane: Bengaluru-based online home furnishing startup HomeLane raised  $3.54 Mn (INR 24 Cr) from Brand Capital which is the strategic investment arm of the media giant Bennett, Coleman and Co. Ltd in the recent round of funding. HomeLane plans to use this latest funding for expansion and strengthening its brand to attract customers. The startup aims to offer its customers a smoother and more streamlined home designing experience enabled by technology.

What’s Up Life: The Gurugram-based online lifestyle media platform What’s Up Life raised an undisclosed amount of funding from actor and television personality Rannvijay Singh, who also joins the company as its brand ambassador. Currently present in Gurugram, Kolkata, and Hyderabad, What’s Up Life plans to expand to various other cities like Mumbai, Bengaluru, Pune, Chandigarh, and Jaipur in the next six months. The startup also has many exciting events and product upgrades lined up.

Theranosis Life Sciences: The medical diagnostic startup based out of Hyderabad raised an undisclosed amount of funding from Mumbai Angels Network. Theranosis aims to explore non-invasive diagnostics for cancer patients and has patented a device that can reduce the need for surgical biopsies. The startup plans to utilise the funds to exhibit revolutionary innovations in the cancer treatment landscape.

CredAble: Mumbai-based supply chain financing startup CredAble raised $14.8 Mn (INR 100 Cr) in a Series A funding round from Alpha Capital. The startup will primarily use the funds to expand its loan book and to accelerate its growth plans by looking at new hirings and building a robust technology backbone. The startup also plans to develop value propositions across additional ecosystems such as manufacturing, etc.

DailyNinja: DailyNinja, the hyperlocal subscription-based delivery startup based out of Bengaluru raised $3 Mn from Saama Capital and existing investor Sequoia Capital. With the latest funding, the startup plans to expand its business by acquiring more customers across Bengaluru, Hyderabad, and Gurugram. The funds will also be used to upgrade customer experience by adding more offerings for their customers.

Nivesh.com: Noida based mass market mutual funds investment platform, Nivesh.com raised $440 K in seed funding through LetsVenture. Rajan Anadan (Google India MD) and Basab Pradhan (former Infosys Global Sales Head) are among the major angel investors in the venture. While enriching the user experience, the startup is also looking at strengthening its distribution network and in enhancing its technology platform to make it more intelligent. Nivesh.com already has customers across 200 cities and business partners in over 15 cities and is looking to grow three folds in terms of business in 2018.

NirogStreet: Technology led Ayurveda platform NirogStreet raised $300 K from the Japanese venture fund Spiral Ventures, Subho Ray (President, IAMAI) and Samir Kumar (Director of Derivatives at Deutsche Bank, Singapore).The startup plans to employ these funds for the technological advancement of their platform dedicated to make Ayurveda the first call of treatment globally. The funds would also be used in spreading awareness and visibility about Ayurveda.

Wow! Momo: Kolkata-based quick-service restaurant chain, Wow! Momo raised an undisclosed amount from William Bissell, the MD Fabindia. The investment is estimated to be around INR 3-4 Cr at a valuation of INR 300 Cr. William will also play a role in advising us the startup on their growth strategy.

eShakti: Mumbai based Paragon Partners invested $11 Mn (INR 75 Cr) in Chennai-based women’s fashion brand startup eShakti. The investment will be used to fuel startup’s growth plans. eShakti specializes in size & style customization and also has a presence in Australia and Canada. The startup operates on an asset-light model with a strong technology backend and robust systems that closely track each order to ensure high quality.