Earlier This Month, RBI Had Issued A Notification Barring Its Related Organisations From Dealing In Cryptocurrencies Following the order by the Reserve Bank of India barring regulated financial institutions from dealing in cryptocurrencies, the biggest public sector bank, SBI (State Bank of India), has issued a notification that it has discontinued cryptocurrency dealings through SBI Card.

The notification stated, “As per RBI, there are increasing concerns of consumer protection, market integrity, money laundering etc, caused by Virtual Currencies (VCs), also referred as cryptocurrencies and crypto assets. Hence, it has announced that with immediate effect, entities regulated by RBI shall not deal with or provide services to any individual or business entities dealing with or selling virtual currencies.” 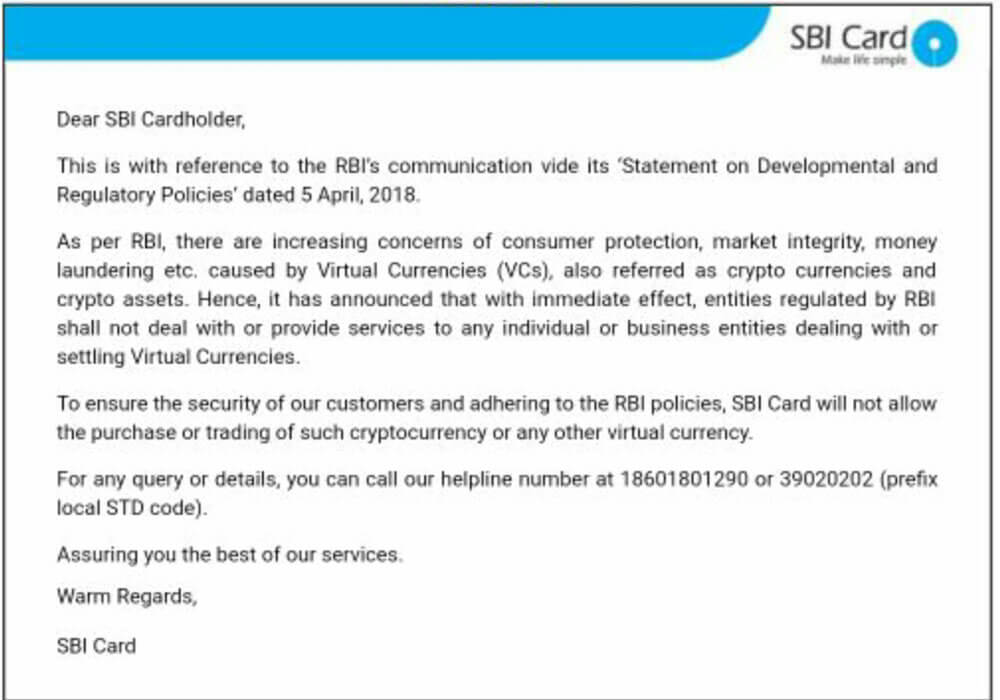 Therefore, the aim is “to ensure the security of our customers and adhering to the RBI policies, the SBI Card will not allow the purchase or trading of such cryptocurrency or any other virtual currency.”

Earlier in February, SBI had issued a cautionary and advisory note pertaining to Bitcoin trading to its credit card customers. It said, “given concerns, both globally and locally, SBI Card would like to advise you to be mindful of potential economic, financial, operational, legal, customer protection and security related risks associated in dealing with cryptocurrencies and virtual currencies.”

While a detailed circular in this regard will be released later by the RBI, the central bank has given three months to the banks to settle their businesses with entities and consumers dealing with cryptocurrencies.

It is worth noting that leading Indian banks including the HDFC, AXIS, YES, ICICI and Kotak Mahindra Bank have already stopped a slew of their services to cryptocurrency exchanges and other entities and traders.

Worldwide, a number of banks including Lloyds, Capital One, Bank Of America, Citibank and JP Morgan have already barred their customers from purchasing Bitcoin and other cryptocurrencies with their cards.

What’s Happening With The Cryptocurrencies?

As Inc42 reported earlier, amid banks stopping their services to exchanges, some of the exchanges have already shut down their businesses.

Following the RBI order, Ahmedabad-based cryptocurrency startup Kali Digital EcoSystems had approached Delhi High Court seeking writ petition against the order and the Delhi High Court has now issued a notice to the Reserve Bank of India (RBI), The Union of India through Secretary, Ministry of Finance and GST Council.

Prior to this, Supreme Court of India had issued a notice to the Ministries of Finance, Law and Justice, IT, SEBI and the RBI, while hearing a plea filed by petitioner Dwaipayan Bhowmick seeking a Bitcoin regulatory framework. In its 43-page petition, Bhowmick has sought explanations regarding the delay over regulatory frameworks.

The Petition on Change.org asks the RBI to take back its circular. Addressing the RBI and the Prime Minister of India, the petition ‘Make India at the forefront of Blockchain Applications revolution’ has been filed under the name ‘Digital Asset Exchanges of India’ and had received over 44K signatures.

A few months back, likening Bitcoin to Ponzi schemes, the Ministry of Finance had cautioned Bitcoin and other cryptocurrency traders against the risk involved in such ‘Ponzi schemes.’

After Bitcoin gained traction, the RBI had first issued a statement on December 24, 2013, warning traders and users pertaining to the risk involved in the business, despite which in December 2017 as Bitcoin reached $20K, Indian cryptocurrency users hit 5 Mn mark, according to Ajeet Khurana, CEO, Zebpay.

With the largest public sector bank SBI abandoning its customers using cryptocurrencies, the impact is bound to be huge on the exchanges who have been dealing with the cryptocurrencies.