The IT ministry, along with the Tamil Nadu govt, has also launched feature phone support for Aarogya Setu

Aarogya Setu app has been downloaded over 100 Mn times since its launch on April 2, 2020 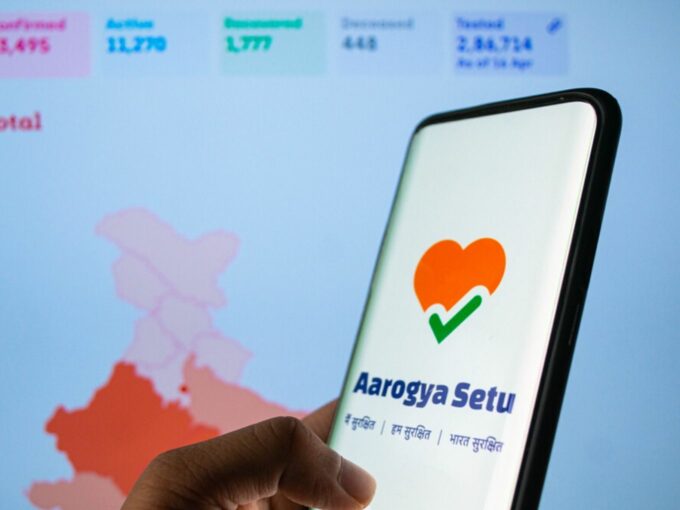 To help businesses recover from the economic impact of the Covid-19 pandemic and the lockdown, the Indian government has been opening up the economy in phases. With this, the government has also decided to make its contact tracing app Aarogya Setu mandatory for many services, whether it is related to travel or other essential services, so that movement of those suspected of infection can be tracked.

The app, which has been developed by the government in the public-private partnership (PPP), leverages Bluetooth and GPS-based location tracking to identify the possible positive coronavirus cases around users. The app also allows the authorities to keep a tab on the movement of suspect cases by collecting location and self-assessment data and tracking the possible contacts such users make with other users of the Aarogya Setu app.

In order to ensure the mass coverage of the app, the government has also urged social media platforms to promote the app. It has also asked mobile manufacturers to pre-install the Aarogya Setu app on all smartphones sold in India and enable support for the app on feature phones such as JioPhone.

Meanwhile, the IT ministry has rolled out an Interactive Voice Response System (IVRS), in collaboration with the government of Tamil Nadu, for feature phone users. The IVRS feature, which started off in Tamil Nadu, collects Covid-19 data and questions from non-smartphone users in the state. It is an automated system that interacts with the callers and asks a series of health-related and other questions such as travel history, symptoms to determine the level of risk.

As India has crossed 1.39 Lakh cases, as of May 24, 2020, both central and state governments have made the Aarogya Setu app mandatory for the following cases.

In mid-April the government issued a fresh set of orders for ecommerce players to curb the spread of the Covid-19 pandemic. The directions, which were part of the standard operating procedure (SOP) for movement of workers amid lockdown, holds the chief operating officer (COO) of last-mile delivery companies accountable for the implementation of social distancing and sanitisation norms.

The new rules make it mandatory for the companies to install the Aarogya Setu in mobile devices off all its staff. The app is being used by the government to trace the spread of the pandemic and educate people on the deadly virus. The application also issues e-passes.

The railway ministry has decided to make Aarogya Setu app mandatory for all passengers. Only those passengers with a ‘green’ sign in the Aarogya Setu app, indicating that they have not come into contact with any Covid-19 case, will be allowed to travel.

Meanwhile, the aviation ministry has decided to resume operations from May 25 on one-third capacity. Aviation minister Hardeep Singh Puri has clarified that Aarogya Setu app is preferable for air travel, but not mandatory. However, some states have made it mandatory for passengers, so installing the app is recommended for all air travellers.

Even though both Delhi Metro Rail Corporations (DMRC) and Noida Metro Rail Corporations (NMRC) have not yet officially set a date to resume their operations, both have decided to make Aarogya Setu app mandatory for all passengers. Just like train and air travel, only passengers with ‘green’ status will be allowed to travel. Besides this, the government has also decided to incorporate mandatory face masks, temperature checks, and usage of hand sanitizers. Besides this, it is also promoting alternative seating in metro coaches.


The Municipal Corporation of Delhi (MCD) and the Delhi Development Authority has decided to make Aarogya Setu app, and face masks mandatory for all the people visiting local public parks in the capital. The department has also decided to allow visitors during certain hours of the day, which would depend on local municipal bodies.

While initially, the Indian government had made the app mandatory for government employees as well as private companies that are working from offices in orange and green zones, it has since changed the rules. As per the old rules, the company’s heads would be held responsible and would be liable for punitive measures if any employee was found without the Aarogya Setu app installed on their smartphone.

However, the government has relaxed this provision in the fourth phase and now, the business heads and other executives would not be held responsible for employees not downloading the contact trace app. It is important to note that in the guidelines for Lockdown 4.0, the ministry of home affairs (MHA) has dropped the word ‘mandatory’ from the guidelines for usage in the workplace.

While many have bemoaned the fact that the app is being made mandatory for various services, the primary concern is around privacy and location tracking. Justice BN Srikrishna, who led the personal data protection framework for the country panel and a draft data protection bill in July 2018, has also stated that the mandating the use of Aarogya Setu app “utterly illegal”.

Moreover, in Kerala, John Daniel, general secretary, Thrissur District Congress Committee, has filed a petition with the Kerala High Court challenging the mandatory use of the app. Daniel pointed out that the centre’s directive had violated the fundamental rights of the citizen. There was also a possibility of misuse of the personal data collected by the app as well as surveillance of citizens.

The mandatory directive also took away the right of a person to decide and control the use of their personal data. One cannot be forced to give away data to a system, the petition claims.

The privacy concerns around the app first began with its launch with issues in the privacy policy. However, over the last few weeks, more security concerns have come to light. French ethical hacker, Robert Baptiste, who goes by the name Elliot Alderson on Twitter, raised a security flaw saying that he was able to find out the Covid-19 status of a given area by exploiting a flaw which allows users to set a location within the application.