From 5G Smartphones To JioBook: 5 Things To Expect From Reliance’s 44th AGM Today

From 5G Smartphones To JioBook: 5 Things To Expect From Reliance’s 44th AGM Today

The company is expected to announce some initiatives on the edtech front, including a low cost laptop — JioBook for students 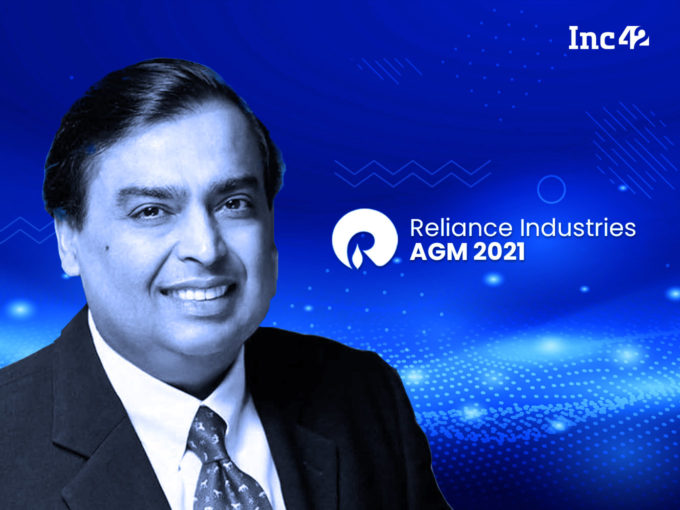 Mukesh Ambani-led Reliance Industries Ltd (RIL) will hold its 44th annual general meeting (AGM) today. As always, it is expected that the company will make some major announcements regarding its consumer-facing businesses during the AGM.

From launching its 4G feature phone to announcing major funding from global tech giants Google and Facebook, Reliance’s AGMs have a tradition of announcing massive pivots, investments and product launches.

Earlier this week, rival telecom operator Bharti Airtel and Tata Group, announced a strategic partnership for implementing 5G networks solutions for India. Last year, Jio had already announced a similar partnership with San Diego-based Qualcomm. However, before Jio could officially launch the 5G service in India, Airtel pulled a fast one by demonstrating the service on its 4G network in January.

It is expected that RIL will provide updates on its 5G trials and launch timeline today. If not for the launch of 5G telecom services, analysts expect that the company will provide some updates on other 5G use cases for industrial and enterprise use. During Q4 results, the company said it was standardising 5G device configurations by collaborating with original equipment manufacturers.

Update On The Google-Jio 5G Phone

It is expected that Reliance Industries’ digital venture Jio Platforms will announce the launch of its first low-cost 5G smartphone in partnership with the tech giant and investor Google in today’s AGM.

Second, both the companies have a commercial agreement to jointly develop an entry-level 4G smartphone that can support 5G in the future. However, reports suggest that the launch may have been delayed due to issues on the supply side. Industry experts suggest that the conglomerate may choose to open pre-bookings and launch the device at a later date as it had previously done in the case of the JioPhone feature phone.

The sub-5k smartphone category is mostly dominated by Xiaomi, Lava, Itel and Samsung. But many of these handset makers have reduced their product portfolio in this category due to the unviable cost dynamics. Now that Jio plans to enter this market, the company is expected to convert its 120 Mn-odd feature phone users and help them switch to affordable smartphones. This means, unlike other contenders, Jio already has a potential market here that can be easily leveraged.

The company is also likely to announce the launch of its low-cost laptop range JioBook this year, which was earlier said to be powered by JioOS. The new laptop will be another addition to its enterprise offerings for schools and colleges, besides the Jio Meet enterprise solutions. The laptop went into development in September last year and could hit the market in the second half of this year.

The low-cost laptop is expected to be powered by the Qualcomm 11-nm Snapdragon 664 chipset with 4G connectivity. Jio has reportedly partnered with China’s Bluebank Communication Technology, which claims to have developed products that run feature phone operating system KaiOS, for developing the product. An affordable Jio laptop with 4G could also be a product targeted towards the edtech market, with students taking online learning classes since the pandemic last year. The company has ramped up its investments in edtech through its acquisition of Embibe. With the blockbuster year that edtech startups have had in 2020, RIL may also announce plans to scale up its edtech presence during the AGM.

In addition, the company is also expected to launch other consumer electronics products through partnerships with Qualcomm, Facebook, Microsoft, and Google.

It’s been a little more than a year since the RIL-WhatsApp partnership and stake sale for JioMart services were announced. During the Q4 results, the company had highlighted several omnichannel initiatives that it had undertaken. It had also announced that it was in the process of running trials for hyperlocal delivery of medicines through its acquisition of NetMeds.

Industry experts suggest that the company may make some key announcements or initiatives for its retail business through JioMart, kirana stores, Smart Points and hyperlocal delivery programs. Its new commerce partnerships exist with over 1 Mn merchants across 33 cities so it is likely to announce something for this segment.

Over the past few AGMs, the company has launched a few different business initiatives and marked its presence in different domains across the internet, consumer services, technology and fintech. Especially since 2015-16 when the company started ramping up its technology play. Shareholders of the company are likely to expect some feedback on the monetisation of these initiatives. For instance, RIL has made very little mention of how far it has been monetising its digital assets for ad revenues. It had also announced low-cost cloud solutions for SMEs and enterprises in partnership with Microsoft previously. These are areas where the business is constantly competing with Airtel and from a tech perspective, shareholders are likely to expect feedback on how the endeavours have fared.

Lastly, some updates are expected in terms of the demerger of the traditional oil and petroleum business from the retail and technology businesses as these increasingly become core segments for the conglomerate. Many industry watchers expect an update on the IPO plans of Retail and Jio Platform businesses, during Reliance’s AGM, following the blockbuster year that internet led businesses had due to the pandemic.

Keep watching this space for updates from Reliance’s AGM throughout the day.