Bangara was at the helm of operations at Indiagames, which was acquired by Disney in 2012-13 Samir Bangara, the co-founder and chief executive of digital music platform Qyuki Digital Media, passed away on Sunday morning following a motorcycle accident. The 46-year-old, in a career spanning over two decades, held roles across functions and organisations, including as venture capital investor, investment banker, CXO-level positions and as an entrepreneur.

A motorcycling enthusiast Bangara was riding a BMW S 1000 RR bike to Charoti in Dahanu from Mumbai when the accident took place. He was riding alone.

After completing his commerce and finance graduation from the University of Mumbai, Bangara shot into prominence when he engineered the sale of home-grown video publisher Indiagames to Disney along with founder Vishal Gondal. Bangara, served as the chief operating officer at Indiagames when it was acquired by Disney in 2012-13 for a reported $80 Mn – $100 Mn.

“We are all in a state of complete and utter despair and words will do no justice to express this loss. But it is our duty to absorb this shock for now so that we can be there for each other, especially for his family, just the way Samir would have liked us to,” said Sagar Gokhale, cofounder and chief operating officer of Qyuki, in a statement to the company’s employees.

Founded in 2011 by AR Rahman and Shekhar Kapur, and led by Bangara since 2013, Qyuki is a data-driven new media company which discovers and invests in opinion leaders and influencers to help them rapidly grow their audience, create content and launch scalable direct-to-consumer brands. In February 2020, the company closed a $3.5 Mn funding round led by Info Edge Venture Fund.

Bangara’s untimely demise left many in shock. Vishal Gondal, founder of GOQii recalled his journey and many experiences with Bangara “We have done so many things together..Travelled the world, experienced the thrills of building startups…the good and bad times…,” he said in a tweet. 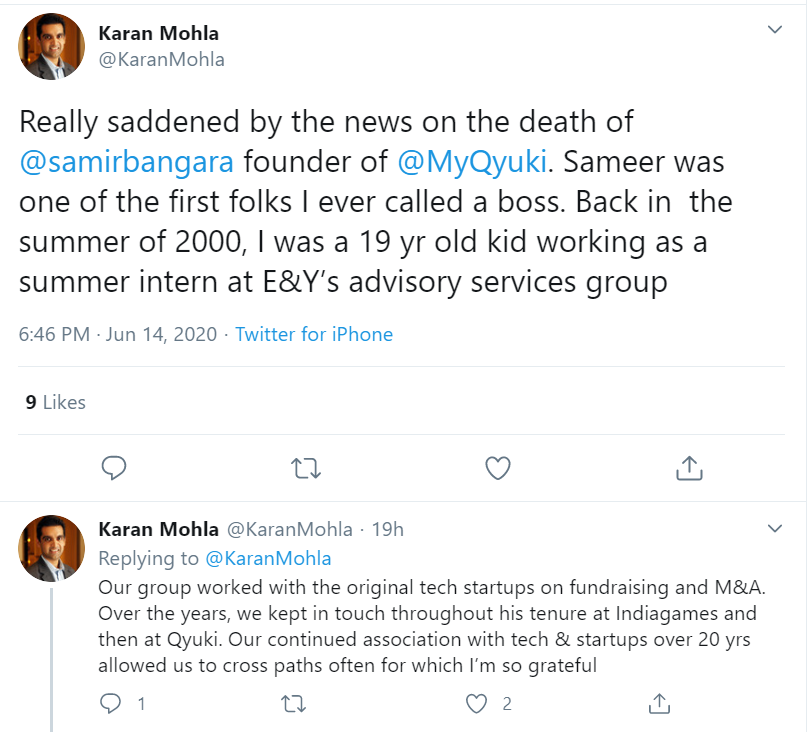 Soon after the news broke, the tributes and condolences poured in on social media. Chiratae Ventures’ Karan Mohla tweeted about learning from Bangara in his first job at EY in 2000. Being a media investor, Mohla said he was able to cross paths with Bangara on several occasions in the past two decades.

“He taught me how to create calling lists, basics of excel models etc. I really cherish those memories. He will be sorely missed for everything but above all his tenacity, kindness, grit and being a champion for entrepreneurs. Rest In Peace my friend,” — Chiratae’s Karan Mohla

Blume Ventures’ Karthik Reddy, who worked with Qyuki as an investor, said that he first heard of Qyuki before Bangara joined but had the first meeting after he came onboard. Reddy claimed that it was only after multiple meetings with Bangara that Blume became an investor and shareholder in Qyuki.

“Later on, BAce (Benny) became a believer and recently, @infoedgeVC. Co grew 5x since we had met. Samir was going to lead this story into the new decade, Covid or otherwise. Spot new talent + create win-wins – simple,” he tweeted. Reddy also remembered Bangara’s passion for bikes and his “love to ride”.

Anupam Mittal, founder and CEO of shaadi.com also mourned the loss. Meanwhile, upGrad founder and CEO Ronnie Screwala remembered Bangara as a person with “a sharp mind, ambitious and a gentleman- we worked so well so many years – only the best of memories..”

Qyuki investor Blume Ventures also expressed its grief at the loss, while InnerChef founder Rajesh Sawhney reminisced of knowing him for over a decade and going on the first GSF India tour to Silicon Valley. Ashish Kashyap, founder of INDwealth, remembered having conversations with Bangara about sports cars and a GSF session and mourned the loss. 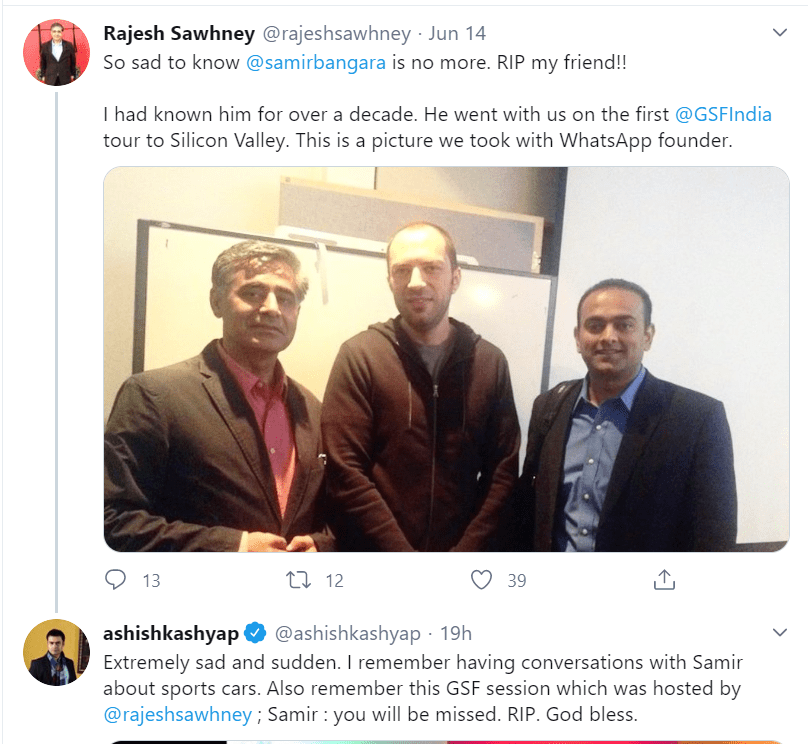 Bangara is survived by his wife and two children.