As backlash for its Women's Day SMS grew, the Walmart-owned ecommerce giant tweeted out an apology

What Flipkart ended up doing is enforcing a stereotype — the irony of using the kitchen as a sales tool on Women’s Day would have been perfect if it weren’t so tragic.

We have seen plenty of tone-deaf promotional campaigns around International Women’s Day in the past, but Flipkart eclipsed those with its SMS campaign on March 08, 2022 that drew the ire of social media along with memes.

Flipkart decided to latch on to the Women’s Day buzz with a text message promoting kitchen appliances,

“Dear Customer, This Women’s Day, let’s celebrate You. Get Kitchen Appliances from ₹299”.

While later in the day, the ecommerce giant apologised for the campaign, it had already drawn plenty of outrage on social media.

Many commenters talked about the stereotypes that such ads perpetuate, while others claimed that this is just an extreme form of targetted advertising considering that Flipkart has plenty of orthodox customers among the hundreds of millions of users it caters to.

The right place of a Woman is in her kitchen ..
Now celebrate the Women's day 💃

Of course, Flipkart is not the only company to have released a token statement or promotional campaign to coincide with International Women’s Day. It’s a problem that has persisted for years as many businesses simply view this as an opportunity to maximise their reach and user base. In the case of Flipkart, users latched on to the ironic messaging on Women’s Day. As backlash for its Women’s Day SMS grew, Walmart-owned Flipkart tweeted out an apology, “We messed up and we are sorry. We did not intend to hurt anyone’s sentiments and apologise for the Women’s Day message shared earlier,” the ecommerce giant, which is valued at over $37 Bn, said. 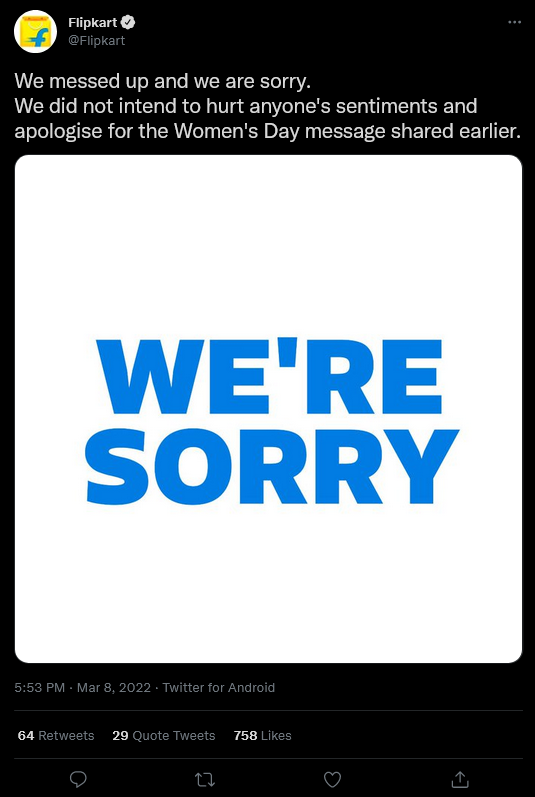 Flipkart could have chosen to market any other category on its website, but the fact that it chose kitchen appliances shows this was nothing but targeting based on data, which arguably feels cold and detached.

In fact, the particular offer mentioned by Flipkart can’t even be considered an offer. The kitchen appliances category on the marketplace has always had products at the specified price of INR 299. There’s nothing new about selling kitchen appliances at that price, given the cutthroat pricing on marketplaces.

As part of our look at the gender gap in tech and the Indian economy, we had argued that companies should look to be open and embrace diversity through culture and not one-off messages. Often they rely on token efforts that are meant to bring in the eyeballs given that International Women’s Day is a major social media and organic trend on and around March 8.

What Flipkart ended up doing is enforcing a stereotype — the irony of using the kitchen as a sales tool on Women’s Day would have been perfect if it weren’t so tragic.