Can Indian Fintech Startups And Banks Move From Competition To Collaboration?

Can Indian Fintech Startups And Banks Move From Competition To Collaboration? India is sitting on the cusp of a fintech revolution. By 2020, digital transactions are likely to account for more than a quarter of transactions in the banking sector. By 2022, digital banking will have more than 50% penetration levels. Post-demonetisation, cashless transaction volumes have gone up. More so, as mobile banking adoption rates are fast outpacing web banking.

In such a dynamic scenario, a question needs to be asked. Can banks and fintech startups be collaborating instead of competing?  If collaboration is the key, where and how can the two collaborate for a win-win scenario?

Is Fintech Going To Take Away A Bank’s Lunch?

The Roundtable was moderated by Srikanth who kick-started the discussion. He asked Nitin Chugh, as to what banks have been forced to do differently in the last few months, post- demonetisation. Nitin stated that the banks have not been forced to do things differently but they are looking at other banks and that is catching on much more than a threat from fintech startups. He added that what has happened in the last few months is that this whole discourse around “fintech is going to take away your lunch” has subsided. On the contrary, most of the discussion is around collaboration. 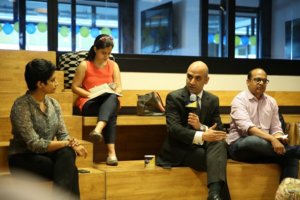 “Our approach was to see if we can take a solution for our customer without any reason of conflict. So, even today, no fintech (startup) comes and tells them that work with us or we will take your business. People come and tell us that we would love to work with you. And this collaboration is happening only in India as compared to other markets where banks still see fintech startups as competition,” explained Nitin. Hence, from the three or four fintech startups that HDFC bank was collaborating with, in the beginning, it is now actively engaging with 75-100 startups now.

Taking this discussion further, Prashanthi Reddy pointed out that one of the problems that banks face is the challenge of long-term engagement. To which Nitin rebutted that long term engagement is possible only when it is a full collaboration that is mutually beneficial. There should be clear agreements as customers are still expecting the banks to take full custody of their information.

Speaking on behalf of fintech startups, Naveen Surya agreed with Nitin that fintech startups need to fully understand bank processes, its mindset, and its risks practices. He was talking from his company, ItzCash’s, experience of collaborating with HDFC for the last five years. He added, “A lot of time, for banks, it is about their reputation. So, we have to stabilise that as we go to our customer set. So that even when they see us together, your credentials as a bank are not affected.”

Open Architecture Vs Conflict And The B2C Fintech Conundrum

Further, in the discussion, Nidhi Prabhu raised the question of Indian banks being against open architecture, unlike Europe. To which, Nitin clarified that banks are not opposed to open architecture but to conflict. He added, “In Europe, they have a taken different path which is leading to conflict. No one is talking about collaboration yet which is not a sustainable thing for the future.”

He added that banks in India will also be fine with open architecture in the future with India Stack (Aadhaar+UPI) coming into the picture. But the way banks are collaborating with fintech startups, both of them would be far off from a conflict situation. Srinivasu Mn of Billdesk added to the discussion by stating that Indian and European companies think of fintech in very different ways. Also, the profile of the fintech entrepreneurs in the two geographies is also very different. Part of the evolution of fintech is how much can you push the boundaries of regulation.

He further reflected, “In India, there is a polarisation of customer bases to mature customer bases. So to speak, five banks would constitute the mature base for fintech customers. Fintech is struggling a bit because there is not enough reward if you are not in the B2C model.  Therefore, the question is, how do you really innovate, as the B2C model is a path to competition?”

Arpit Ratan of Signzy agreed to the thread. He commented that Signzy’s predicament has risen because it is a purely B2B company and investors kept asking if it could be turned into a B2C model. It is tougher being a B2B player but still, some investors do believe in the power of an enterprise-facing model.

Krishna Vinjamuri of Lightbox, representing the investor community, admitted that indeed the ability to build a B2C model is becoming very expensive. He also commented that B2B is becoming easy with investor interest rising in it.

Vikram Sud of 91springboard, an ex-banker and angel investor stated that if B2C becomes cheaper, one would see a lot of new things coming to the market. Because a customer now has a new set of expectations as they are consuming in different ways today as compared to 5-10 years ago. “We might have digitised a lot of things such as buying insurance but we haven’t quite cracked it. Banking and payments have been made better but not changed much. We haven’t seen a much dramatic change yet, though space is quite ready for it and regulators to have done much as compared to other countries. One big issue is that B2C is expensive. So I am hoping a lot more will be done because compared to ASEAN markets, we have so much scale and size to be tapped.”

Srikanth raised an important point in the discussion that there is probably a lack of understanding among fintech and banks. For one, the fintech startup’s intention is not to take away customers from a bank. But are they able to understand a bank’s intention?

Anurag Pandey of PayU commented that a lot of this conflict can be resolved if a fintech startup has ex-bankers on the team. He further opined that fintech startups that are run by ex-bankers start at an advantage. They have the relationships to get the first meeting, they don’t get frustrated by the whole process, and they have the ability to cope. So, these startups have to think as to who are the people they need on their team who will give them that tactical advantage. Because a bank-fintech startup relationship is not a purely performance-driven relationship as yet.

Arpit reiterated Anurag’s views and added that Signzy’s attempt has been to understand the strength of banks. “We believed from day one that banks have the knowledge, banks have the experience and you cannot discount that. So, as a startup, you are nimble and lean, and if you can leverage each other’s strengths, you can collaborate.” 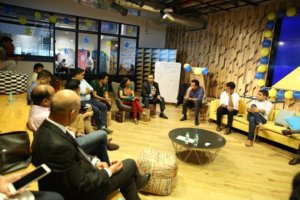 Having had exposure to banking in his earlier stint, Riyaz Ladiawala of Heckyl Technologies, agreed that there is a very little understanding among the fintech community to what it takes to engage with the bank. He said, “Indian fintech companies lack the business acumen. To make a product is one thing, but to monetise it is a completely different aspect altogether. Banks understand the monetisation part well. For startups, the product becomes the hero but understanding what the bank wants or the risk parameters or the regulations or the cultural issues at the bank takes a back seat.”

Riyaz reflected that it’s better to go with a product to the bank than a concept. Actually, show them something that’s working or a POC (proof of concept) with a time definition to it.

He quipped, “If one can write a book on how to deal with a bank, it will be a hit in India!”

Nitin stated that the first thing to solve is a startup’s mindset problem of how to approach the bank. He mentioned that while a reference does get a fintech startup through the door, it still might not lead to the right person to talk to. It is keeping in mind these conundrums that HDFC now has an innovation team which meets startups and looks out for new ideas. He added it was the innovation team which gave the bank the idea of an innovation summit which has led to a greater engagement of the bank with fintech startups. According to Nitin, in the last nine months, the bank has examined about 1,000 ideas.

At this point, Prashanthi added that a platform like RISE Mumbai can act as a right interface for startups to engage with banks as it does not take any sides. She believes that post-demonetisation, the business acumen of fintech startups has progressively increased.

Are Fintech Startups In India Targeting A Limited Market?

Commenting on the fintech opportunity, Naveen stated that the opportunity that exists is in the 80% of undigitised customer base. He said, “Everyone is trying to target the top 10% that has resulted in oversupply and that’s why conflict is created.  The problem is to create a variety of typical Indian solutions, which are more complex to build, for the next 70%.”

Srinivasu also agreed to the fact that, at the moment, India is not that big a fintech market as is being portrayed. Most fintech startups and banks are coming up with solutions to serve the same small set of customers because there aren’t enough viable paying customers.

Nitin revealed, “When we organised the innovation summit in February, we had a category of rural fintech in that. But, to our surprise, not even one startup came up with a product for that bracket.” He quipped lightly that the bank had to force-feed a startup into the category for representation as no one had shown up!

At this point, Srikanth took the discussion to an interesting point. Would fintech startups, investors, and accelerators expand the market to far off places? 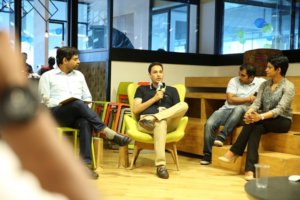 Many of the participants agreed that they would want to but even in cities like Mumbai, there still exists an underserved market. Naveen stated, “For Itzcash, Mumbai is equally a big over-served and under-banked market for us. Through Itzcash, we are trying to crack that underserved market.”

Srinivasu added that fintech startups largely need to understand the underserved market and create products tailored to them.  There’s an issue of risk and customer need that needs to be solved. In conclusion, the roundtable brought to light the fact that fintech in India has come to a stage where the real game is not about innovation in fintech alone but more about the distribution of fintech.

Srinivasu’s parting comment seemed to be an apt conclusion with regard to banks and fintech startups collaborating with each other. He ended with, “You can’t over serve the top 100 Mn customers.”