With 57.7% share, digital payments startups made more than half of the total fintech funding raised 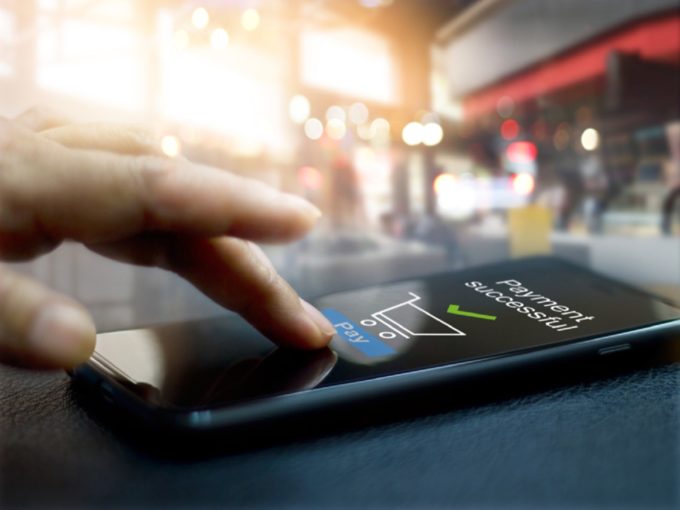 As the Indian startup funding hit an all-time high with $26 Bn raised in the first eight months of 2021, the fintech startup ecosystem saw 5.8x higher capital inflow to reach $4.6 Bn funding across 160 deals as compared to the same timeframe last year.

In January-August 2020, the fintech startup ecosystem had seen $0.8 Bn investment across 84 deals while in the same period in 2019, the fintech ecosystem reached $1.6 Bn in 88 deals in the country, indicating the growth trajectory led by the lending and digital payment startups in the pandemic i.e. 2020. 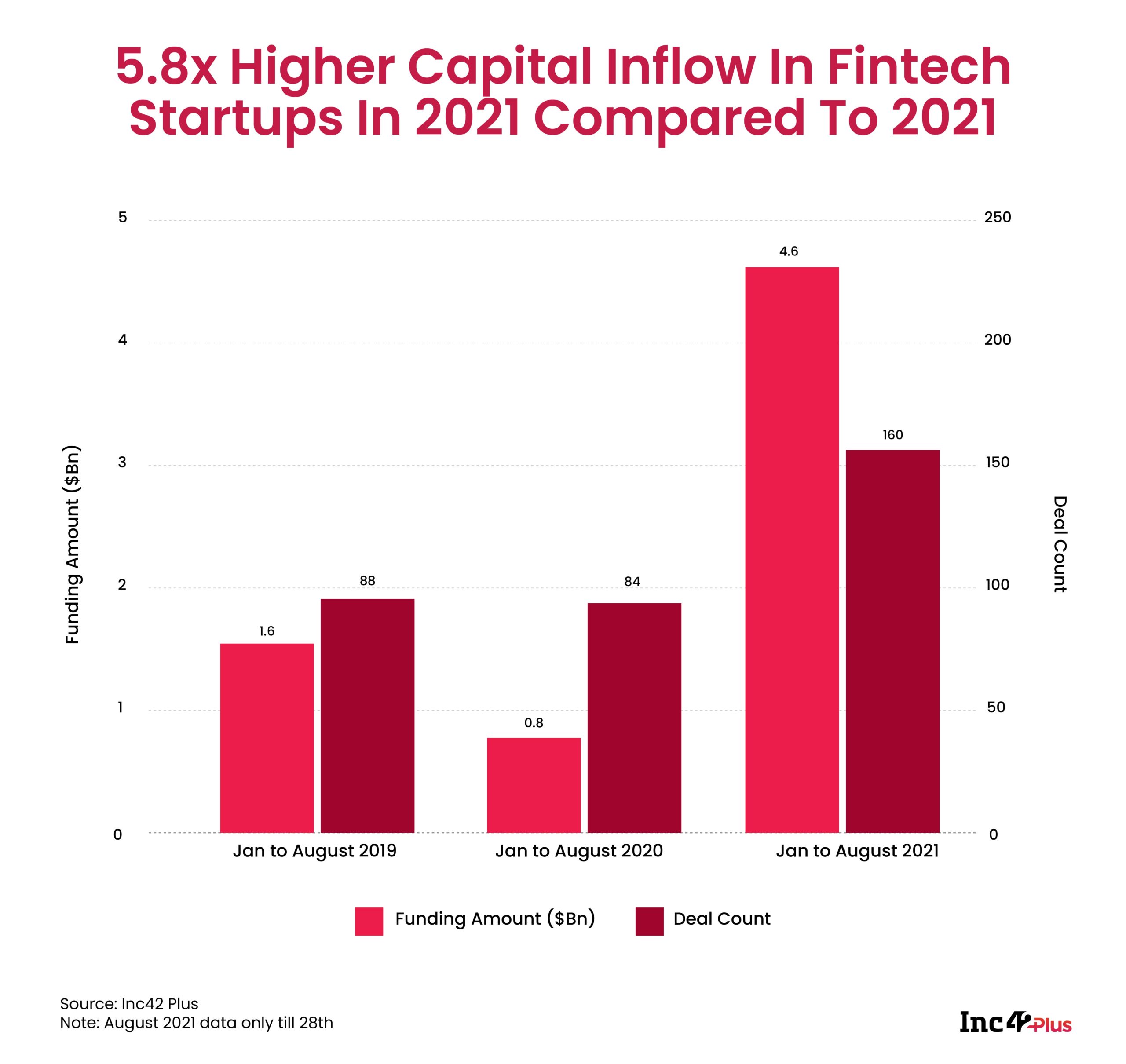 While the startup majors and BFSI companies in this sector — the likes of Paytm, Policybazaar, PhonePe, BharatPe, Pine Labs and others — have carved out significant market share in specific categories, there’s still a whole lot of financial services these giants don’t cover and that’s where early-stage startups have the opportunity to disrupt and find a moat. 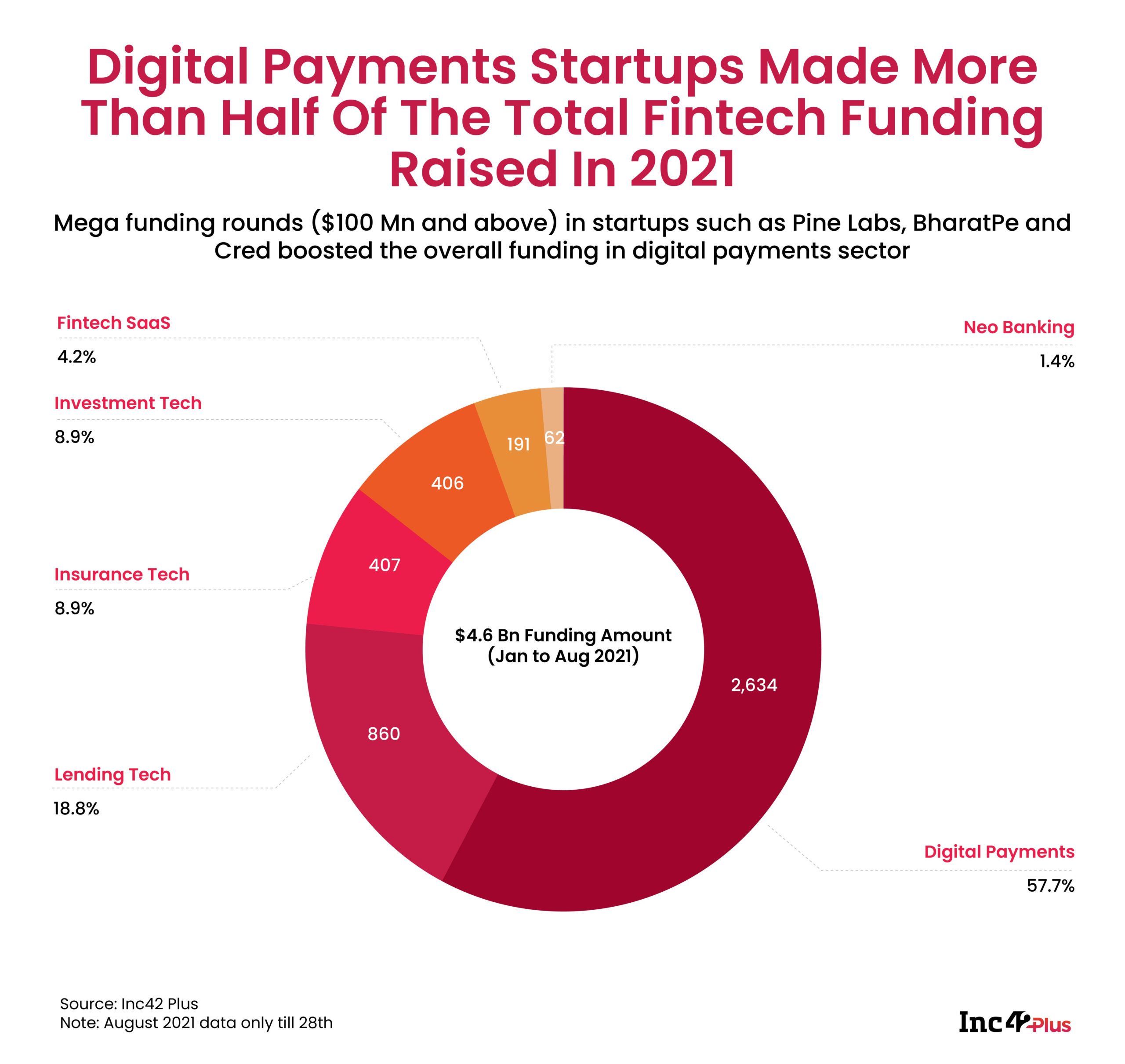 With 57.7% share, digital payments startups made more than half of the total fintech funding raised in the reported period. Mega funding rounds ($100 Mn and above) in startups such as Pine Labs, BharatPe and CRED boosted the overall funding in the digital payments sector.

The growth comes on the heels of a stupendous growth in transactions coming via the Unified Payments Interface (UPI).

According to Prabhu Ram, Head-Industry Intelligence Group, CyberMedia Research (CMR), India’s digital economy has been on the growth curve, enabled by the rise of powerful smartphones, very affordable data costs and pivotal government initiatives such as the Jan Dhan-Aadhaar-Mobile (JAM).

“The digital payments ecosystem has got a fillip with many new digital-native startups bringing forth new technology innovations, addressing consumer experience, and enabling ease of payments, amidst the pandemic,” Ram told Inc42.

The National Payments Corporation of India (NPCI) reported 3.5 Bn transactions worth INR 6.39 Lakh Cr in August 2021, growing 9.5% by volume and 5.4% by value over the previous month. In June and July, transaction volume grew by 10% and 15% respectively on a month-on-month basis while transaction value had grown by 11% and 10% respectively.

Paytm’s transaction volume spiked by 18% during July in comparison to PhonePe and Google Pay, which grew at 15% each. 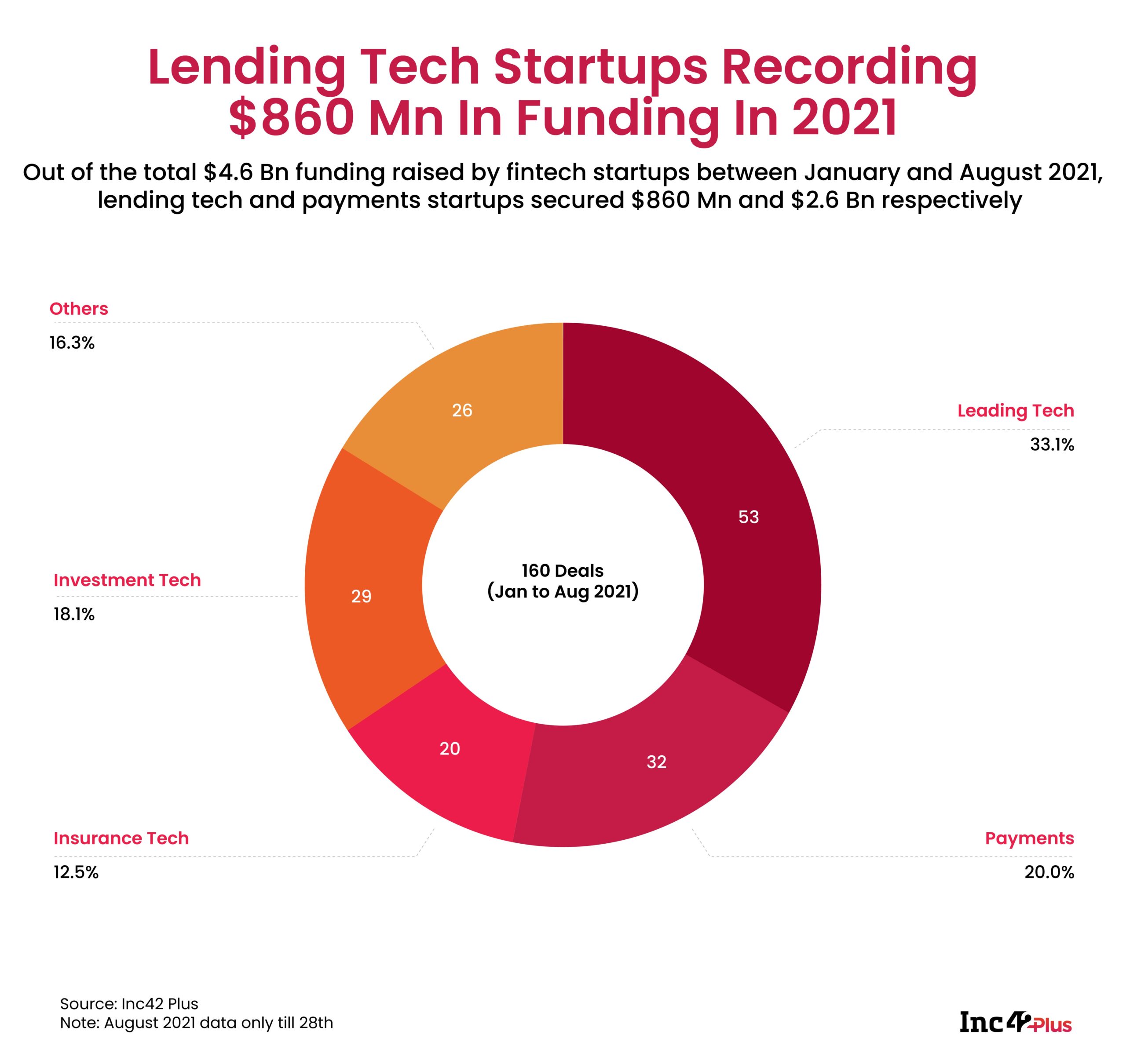 Out of the total $4.6 Bn funding raised by fintech startups between January and August 2021, lending tech and payments startups secured $860 Mn and $2.6 Bn, respectively. Startups like OfBusiness, KreditBee and MPOWER were some of the prominent players in the lending tech ecosystem.