FAST42: 6 Days To Go For The Grand Unveiling Of India’s 42 Fastest-Growing D2C Brands

FAST42: 6 Days To Go For The Grand Unveiling Of India’s 42 Fastest-Growing D2C Brands

In October 2021, we announced FAST42, an Inc42 initiative to identify and recognise India’s fastest-growing D2C brands. After four months of extensive groundwork, we are all set to announce the 42 companies that have made their way to the coveted list.

In the past four months, we looked into 1,000+ D2C brands, conducted 300+ interviews and listened to dozens of business pitches to identify these brands.

Now we are ready to announce the final list that includes D2C brands from all over India, making waves in their respective segments once dominated by industry giants.

On March 3, Inc42 and Trell will announce the most coveted list of fastest-growing D2C brands in India. The FAST42 brands will be featured on Inc42 via an interactive web page, and we will also publish a coffee-table book!

Supported by Simpl and Wigzo, the launch event will also host the leading names at the forefront of India’s D2C revolution.

The list has been split into two main categories – growth and emerging. While growth companies have been selected based on their revenue growth, the emerging list has been decided based on pitches, jury feedback and company potential.

Know more about the criteria here.

“It was a wonderful session, and it was inspiring to see so many companies growing fast and building wonderful businesses,” said jury member Prasun Agarwal, partner at A91 Partners, while commenting on the pitches by the shortlisted startups from the emerging category. “It is clear that the advent of new-age brands has just started in India. There is a big opportunity to serve the unmet needs of a large number of consumers.” 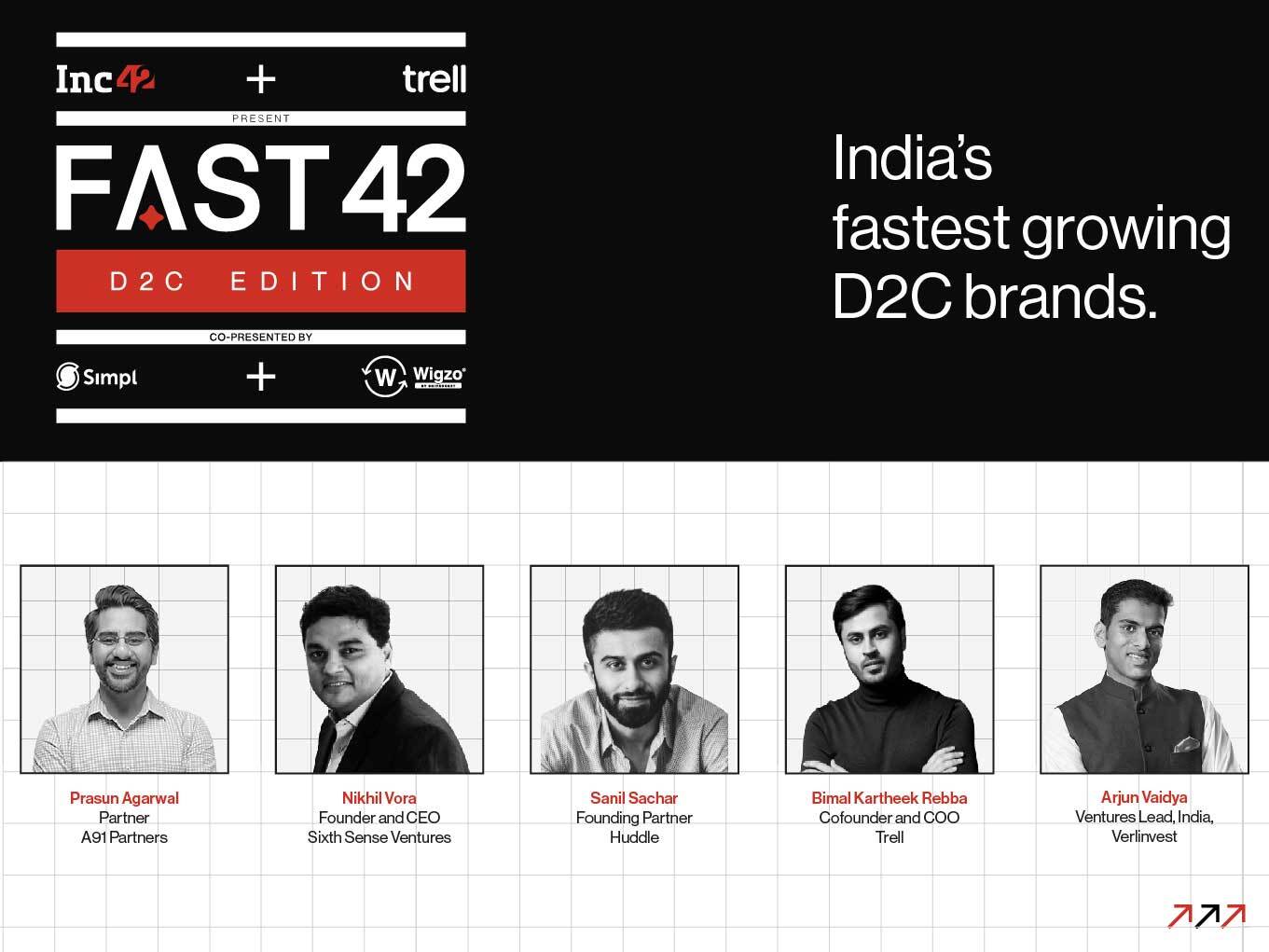 Inc42 has been at the forefront of reporting, monitoring and analysing India’s D2C market since it has emerged as a significant trend. To promote and support the vibrant ecosystem, we have previously launched various initiatives such as the D2C Playbook, the D2C Day 1 & 2 (masterclass), two editions of India’s largest D2C conference, the D2C Summit, and the D2C Market Landscape & Trends Report, 2021.

As part of this year’s Fast42 event, we will launch an exclusive coffee-table book featuring the shortlisted startups and charting out their journeys, achievements and the way forward.

Besides announcing the ecosystem’s most coveted list and launching the coffee-table book, the event will also host sessions by industry leaders and stakeholders who will dive deep into the world of D2C to provide insights into its massive potential, current trends and the future ahead. The event will also feature a session with the startups from the Fast42 list and decode their business strategies, approaches and what makes them stand out.

Talking about the winners of the D2C Edition 2022, Bimal Kartheek Rebba, cofounder and COO of Trell, said, “The startups have made significant inroads into their customers’ lives with strong retention cohorts. Most importantly, all of them have a great story and a strong brand presence. In the coming years, some of them will be among the top 5 of their categories despite an extremely competitive ecosystem.”

Elucidating the future of India’s D2C sector, jury member Arjun Vaidya, ventures lead at Verlinvest, said, “As I have always mentioned, this is the decade of D2C. Hundreds of large brands will be created even as consumer behaviour evolves rapidly. So, we are on the cusp of something super exciting!”

Many Indian brands are riding the D2C wave and growing exponentially in the wake of the pandemic. Although the economy worldwide has suffered from its onset as never before, the health crisis has undoubtedly effected a digital revolution of sorts and accelerated the growth of the ecommerce industry in India and abroad.

According to Inc42’s recent analysis, the ecommerce sector is likely to grab a whopping $200 Bn market opportunity by 2026. And brands are ready to make merry as Indian shoppers eagerly embrace digital adoption for the sake of convenience and safety. Today, more than 50K digital-first brands have joined the D2C bandwagon to reach their customers faster and engage with them more efficiently. With the FAST42 list, we aim to bring the fastest-growing D2C brands into the limelight and narrate their tales of challenges and success.